One pastor killed, another church worker subjected to harassment in 2 days 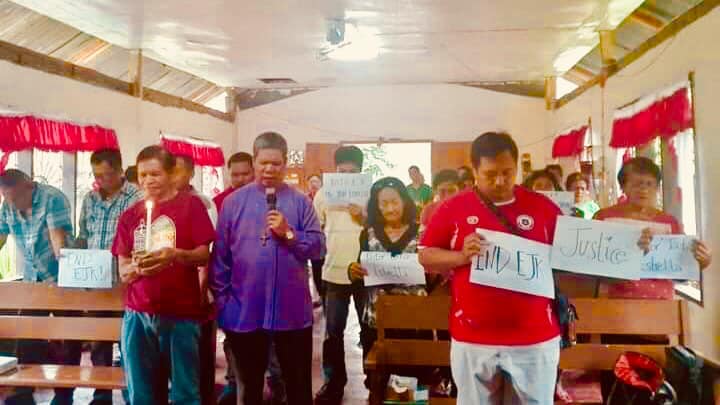 MANILA – The Ecumenical Bishops’ Forum assailed the continuing attacks against Church leaders and workers under the present administration – with the killing of a pastor in Cotabato and attempted arrest of a chuch lay worker in Bukidnon over the past two days.

“The number of violent attacks against Christian human rights defender has alarmingly increased in the three years of President Rodrigo Duterte’s government. We hold him responsible for the escalating hostile acts being committed against all human rights defenders from civil society and people’s organizations and the church community,” the EBF said.

On Aug. 2, United Church of Christ in the Philippines Pastor Ernesto Javier Estrella was gunned down by motorcycle-riding assailants in Antipas, Cotabato.

Meanwhile, on Aug. 3, a church lay worker from the Rural Missionaries of the Philippines was subjected to harassment when soldiers belonging to the 1st Special Forces Battalion based in Manolo Fortich, Bukidnon “invited” her go with them at about 8:30 p.m.

Kristin Lim is also a former station manager of Radyo Lumad, a project ran by the RMP through the assistance of the European Union and the World Association for Christian Communication under the Healing the Hurt Project, said the National Union of Journalists of the Philippines.

Lim and the rest of the staff of the now-defunct Radyo Lumad were repeatedly subjected to red-tagging, which was among the reasons the program was shut down, said JB Deveza of the NUJP Western Mindanao Safety Office.

Under President Duterte, church leaders and workers have been subjected to unprecedented threats and harassments.

Apart from the two incidents in the past two days, church leaders such as Catholic Bishops Honesto Ongtioco, Pablo Virgilio David, Teodoro Bacani Jr., and Archbishop Socrates Villegas, three other priests, a religious brother, and scores from the political opposition were slapped with sedition charges over the viral “Bikoy” videos.

Sisters Elenita Belardo and Emma Cupin of the Rural Missionaries of the Philippines (RMP), and Fr. Wilfredo Ruazol of the Iglesia Filipina Independiente (IFI) and EBF, along with rights and women’s organizations were also charged with perjury by National Security Adviser Hermogenes Esperon.

Last month, church workers from the United Methodist Church were also harassed and accused by state security forces for purportedly coddling members of the New People’s Army and conducted a warrantless search in a church facility in Roxas, Mindoro.

In an earlier statement issued by the Executive Board of the EBF, bishops said that the “accusations and attacks against church people are baseless and undoubtedly devoid of common sense and sound reason.”

The EBF said, “Christians must act together for the defense of justice, human rights, democracy and the common good. Let us fight against the systematic design to undermine the participation and contributions of church people in the people’s struggle for equality, dignity and the common good.”

The post One pastor killed, another church worker subjected to harassment in 2 days appeared first on Bulatlat.