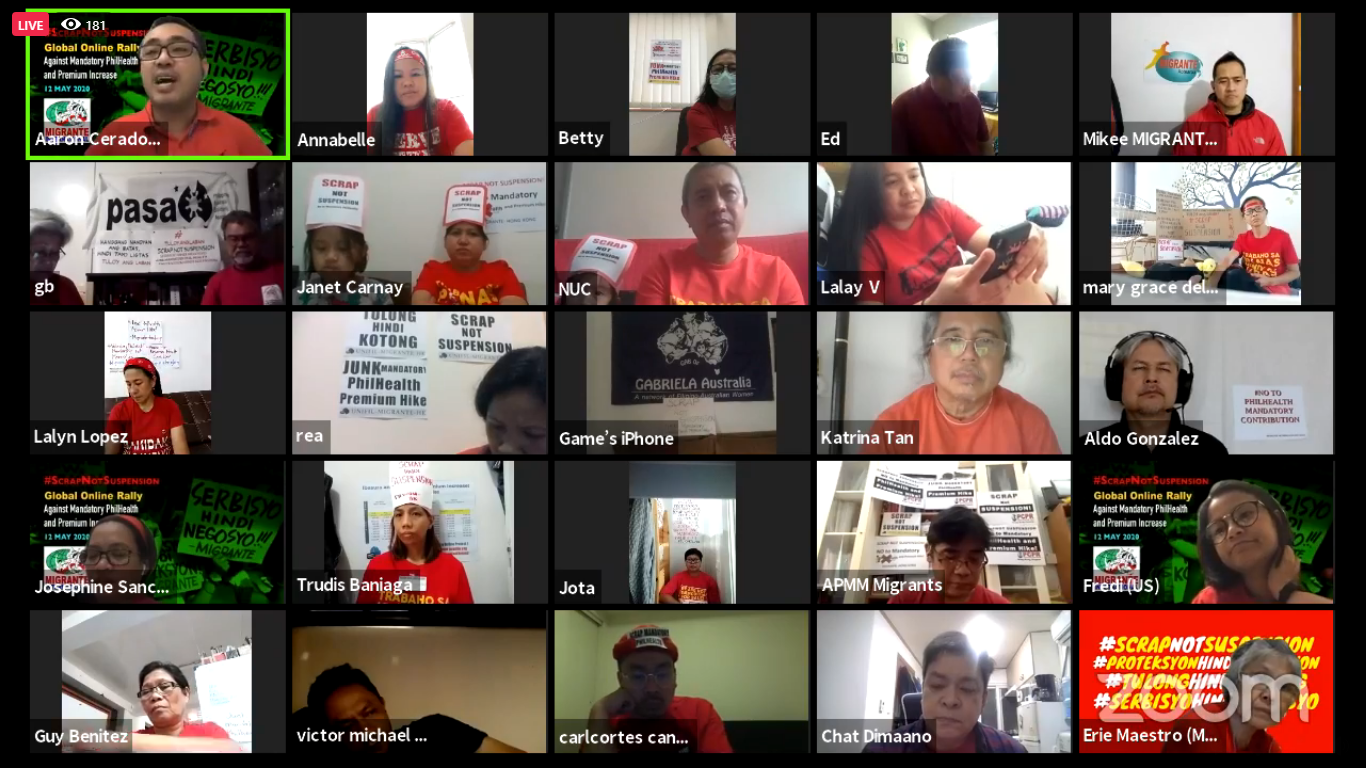 “Filipino migrants are tired of being treated as milking cows by the Philippine government. We will continue to protest the unjust provisions of the law until it is totally scrapped.”

SANTA ROSA, Laguna – Migrant workers from all over the globe took to the internet to voice their condemnation to the mandatory Philhealth imposed upon them, May 12.

Migrante International and members from chapters in the United States, Canada, the Middle East, Europe, and Asia staged an online protest as part of an “online global protest” to oppose what they considered “unjust” and “extortionate” exactions imposed by the Duterte government.

On April 22, Philhealth released Circular 2020-0014, classifying OFWs as direct contributors under Republic Act 11223, the Universal Health Care Law, and as such must fall under the tiered premium hike stipulated by the agency. Outrage from migrant Filipinos worldwide led to Duterte ordering a suspension of the collection, May 4.

But suspensions are not enough, said Migrante International, asserting that the Duterte administration is merely “dousing cold water to the Philhealth issue.” The group is demanding a total scrap of the relevant provisions in the Universal Health Care Law.

According to the group, most migrant workers do not stand to benefit from the Philhealth insurance because of existing insurance programs in their respective countries.

“My companions are riling up in protest,” said Mel Baltazar of Migrante Australia, who confided that most of the migrant workers there have lived there for years or even decades. Baltazar noted that the proposed increase would only hurt the migrant workers and enrich Philhealth, which stands to earn “as much as P3 trillion annually from this scheme.”

“Philhealth is milking OFW’s dry,” she stated. Australian labor laws stipulate that migrant workers must be given health compensation by their employers, which she said makes the
Philhealth insurance “redundant and useless.”

Migrant workers from other nations shared the same sentiment. Erie Maestro from Migrante British Columbia in Vancouver, Canada, called the Philhealth hike an “unnecessary burden” on the workers and dual citizens in Canada since labor laws in the country also guaranteed healthcare.

Australia and Canada are home to the third and fourth largest migrant Filipino communities in
the world, respectively.

Aside from existing insurance programs, Migrante asserted that OFWs were not consulted before the law was enacted. “Had they taken the time to talk to us,” said Dolores Balladares Pelaez of Migrante Hong Kong, “they would have realized just how unfair this law is to OFWs.”
Migrant workers also questioned the Duterte administration’s right in extracting more premiums from OFWs given their present conditions.

Maria Sol Pajadura of Migrante Europe stated that most migrant workers in France live “from paycheck to paycheck”, and conditions have only worsened due to the global pandemic.

Marlon Lacsamana, also of Migrante Europe, countered the Duterte administration shouldn’t “pass on the responsibility of providing for healthcare to OFWs.”

“If Duterte can find the money to fund militarization campaigns in the countryside, he can take that money back and give it to the people,” Lacsamana said.

Migrante International stated that the online protest was only the latest in a series.

“Filipino migrants are tired of being treated as milking cows by the Philippine government. We will continue to protest the unjust provisions of the law until it is totally scrapped,” said Joanna Concepcion, chairperson of Migrante International.

The group is supporting amendments filed by the progressive Makabyan bloc through House Bill 6698, May 7, which aims to make Philhealth membership voluntary for OFWs.

The group aims to conduct a weekly ‘Kalampagan’ protest amid the global pandemic, which is expected to result in job losses of over 420,000 OFWs globally.