P108-M seized illegal drugs from US turned over to PDEA 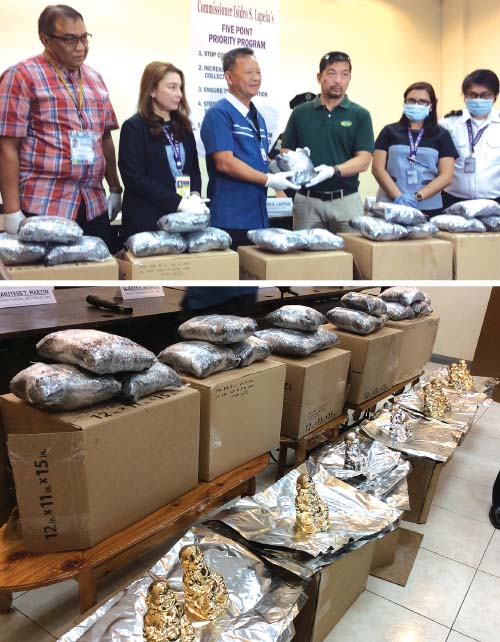 The packages were contained in six suspicious cargoes which were subjected to interdiction by joint elements of PDEA3, PDEA-NCR, PDEA-Special Enforcement Service K-9 unit and the Bureau of Customs (BOC)-Clark.

In a press conference, Lapeña said that coordination between PDEA, BoC and the Clark International Airport Corporation (CIAC) was the key in achieving the objective of intercepting the shipment, and eventually control the delivery of the illegal drugs to the consignees.

“Galing ito (shabu) sa (These came from) Southern California and they were put on hold because they have suspicious analogous declarations with the shipments seized last January 23,” said Lapena, adding that the boxes were declared to contained either statues, sculptures, figurines or religious items.

“Malaking tulong yung close coordination with the CIAC and the efforts of all agencies concerned to halt transfer and delivery of the illegal drugs to the consignees,” he added.

Lapena said the shipments may be identical or similar with the modus of the alleged drug cartel that had earlier sent shabu to the country using religious items as decoy.

According to Ladip, they have been monitoring illegal shipment from abroad since last month that was why this latest attempt to smuggle illegal drugs into the country was foiled.

After the packages were intercepted, Ladip explained that initial documentation and proper labeling of the confiscated illegal substance was made by a Customs officer, and eventually a simultaneous controlled deliver was planned for the arrest of the consignees.

“After the discovery of the illegal drugs in Clark, joint anti-narcotics operatives of PDEA3 and PDEA-NCR conducted controlled delivery operation in Cavite (residences of the consignees) but unfortunately no person was arrested because the consignees could not be located.

He said the consignees will be charged for violation of the Customs modernization and tariffs act and the Comprehensive Dangerous Drugs Act once they have been identified.

“We are more strict now as much as possible especially those items coming from abroad,” said Lapeña.