People have the power: EDSA 32 years on 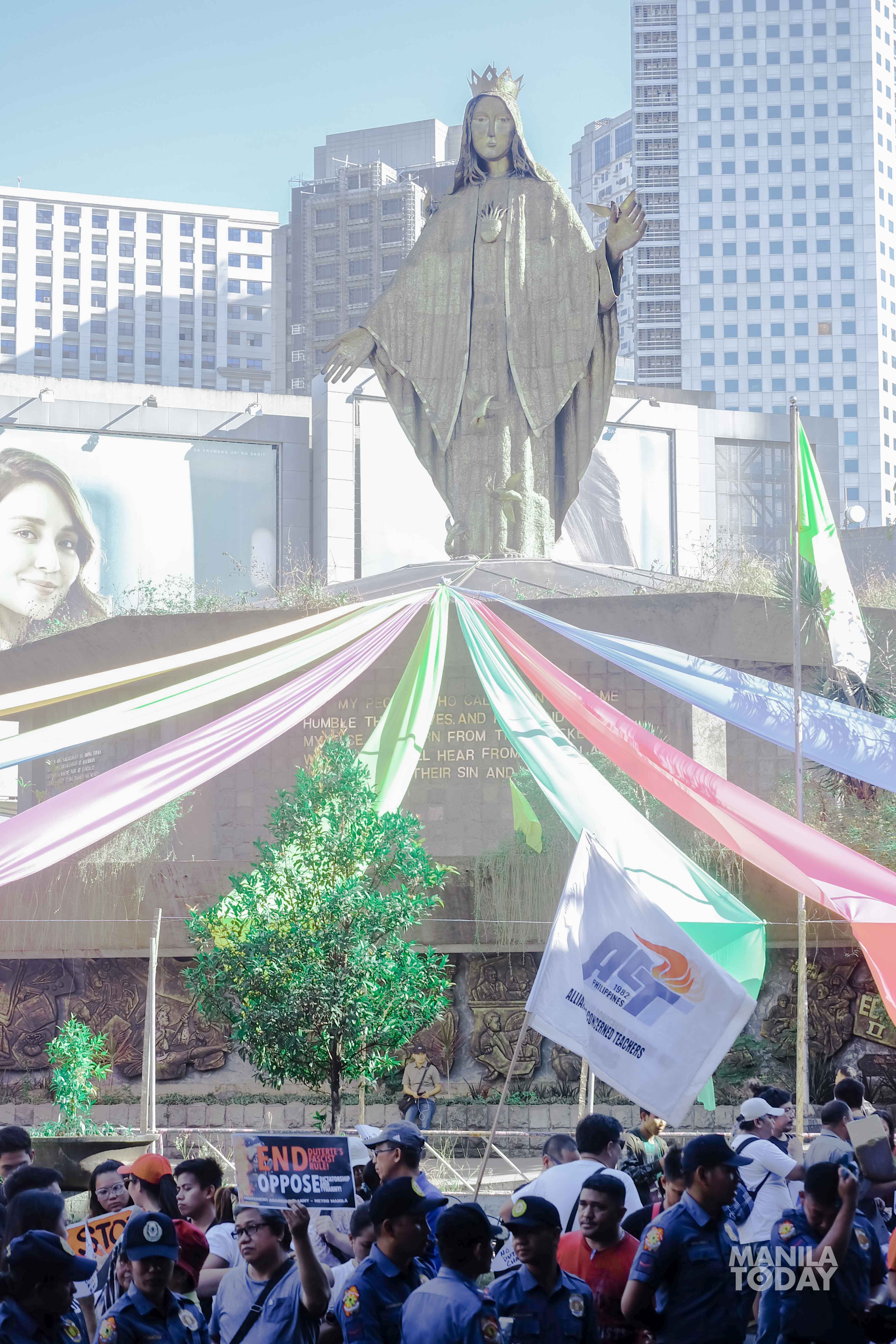 Some called it a revolution, but it was hardly ever one.

After the fall of dictator Ferdinand Marcos on February 25, 1986, the Philippines’ so-called restored democracy meant no land for farmers, low wages for contract workers, land grabbing and militarization for indigenous peoples.

Nothing much has changed since then except the names and faces of those in power. Prices of food and utilities continue to soar, as do the number of those killed in the drug war and martial law atrocities in Mindanao.

If the Philippines had won its revolution in 1986, then why do the people continue to fight tyranny? 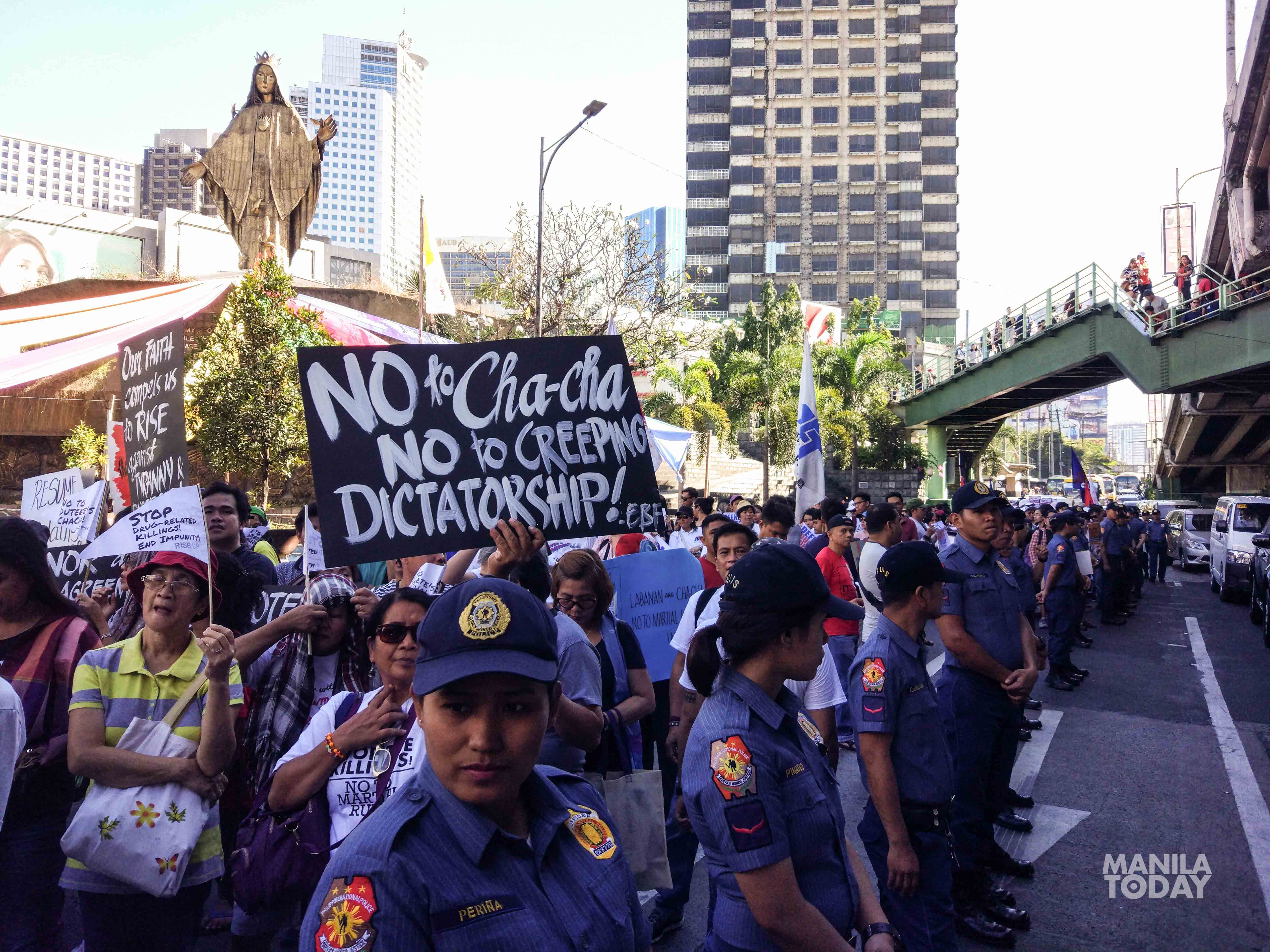 The EDSA Shrine, a testament to the people’s unity in toppling a dictator 32 years ago, is once again witness to the people’s struggle against a rising tyrannical leader. Photos by Erika Cruz 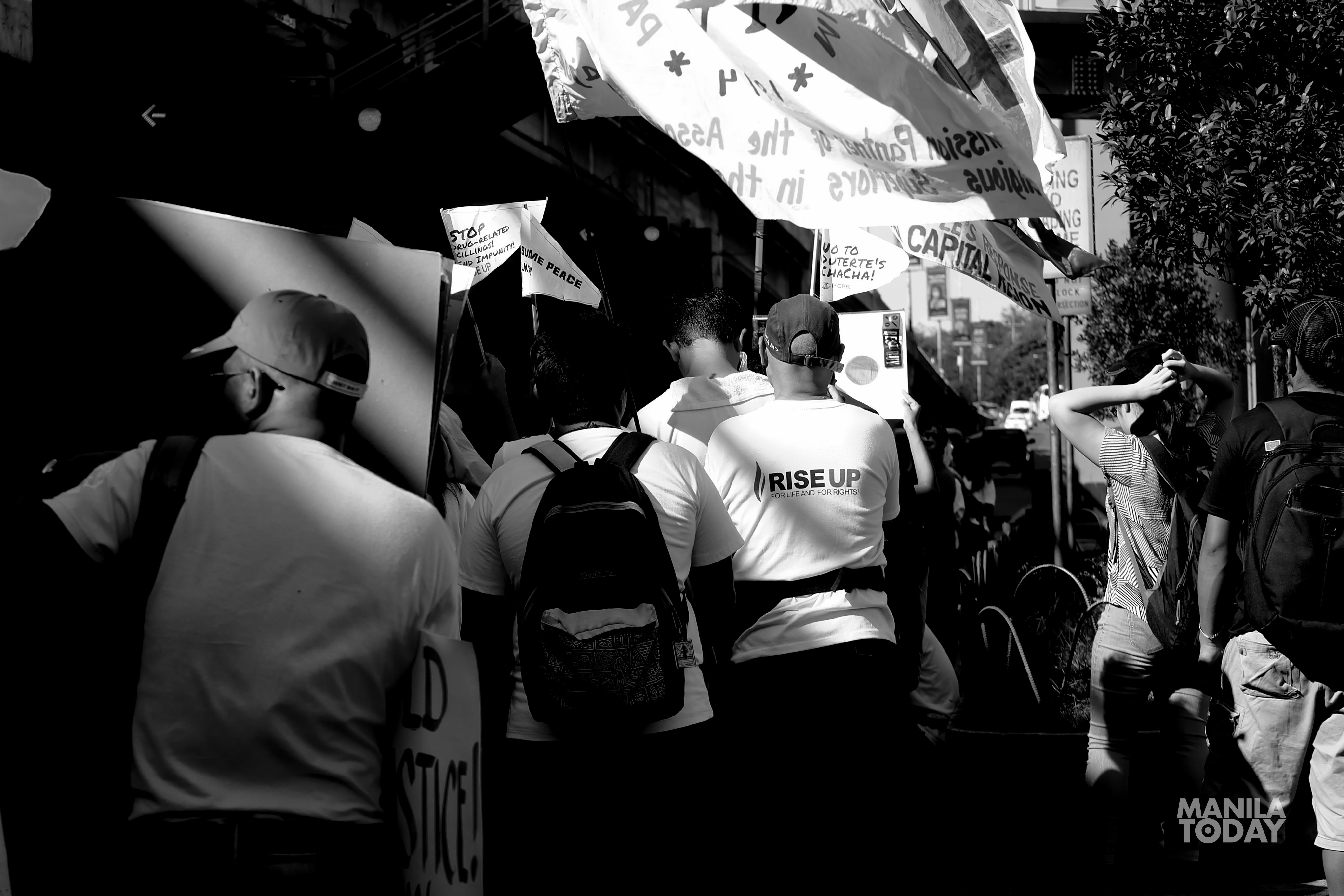 Protesters gather at the EDSA Shrine and prepare to march to the People Power Monument, not minding the afternoon heat. Photo by Erika Cruz 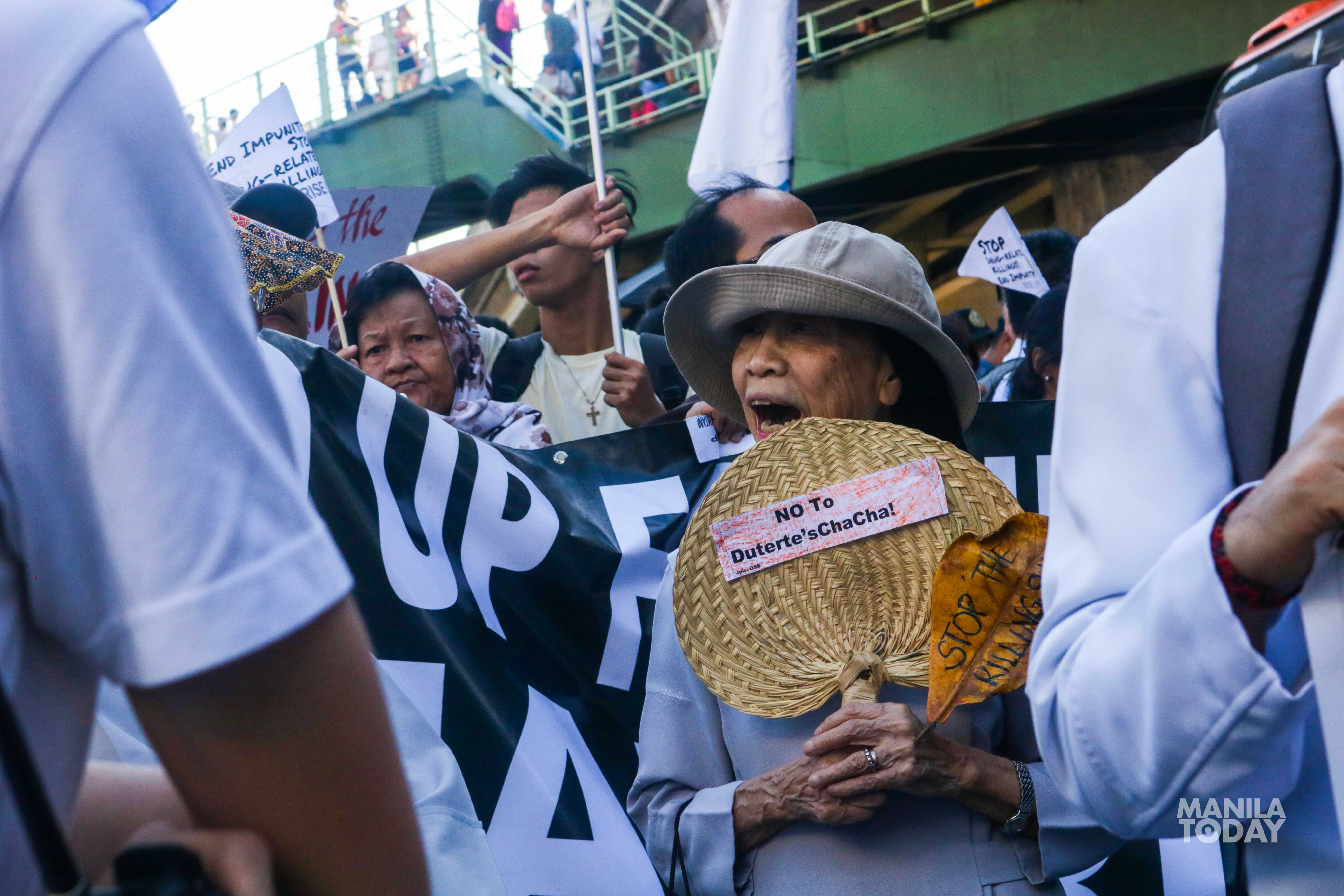 Reminiscent of a past that saw church people on the forefront of People Power, priests, pastors, nuns, lay ministers, and seminarians led the march to the People Power Monument. Photo by Joshua Acpal 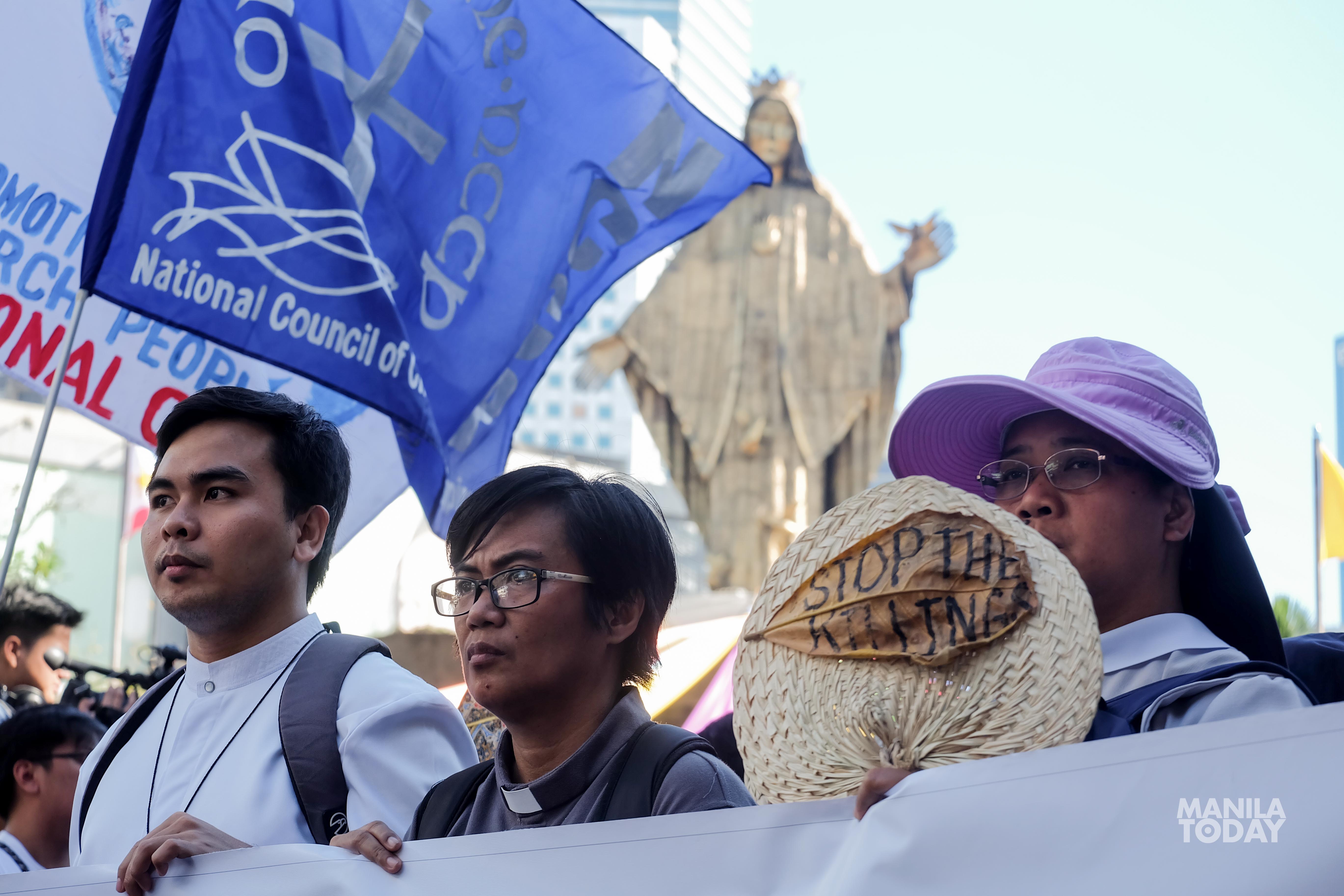 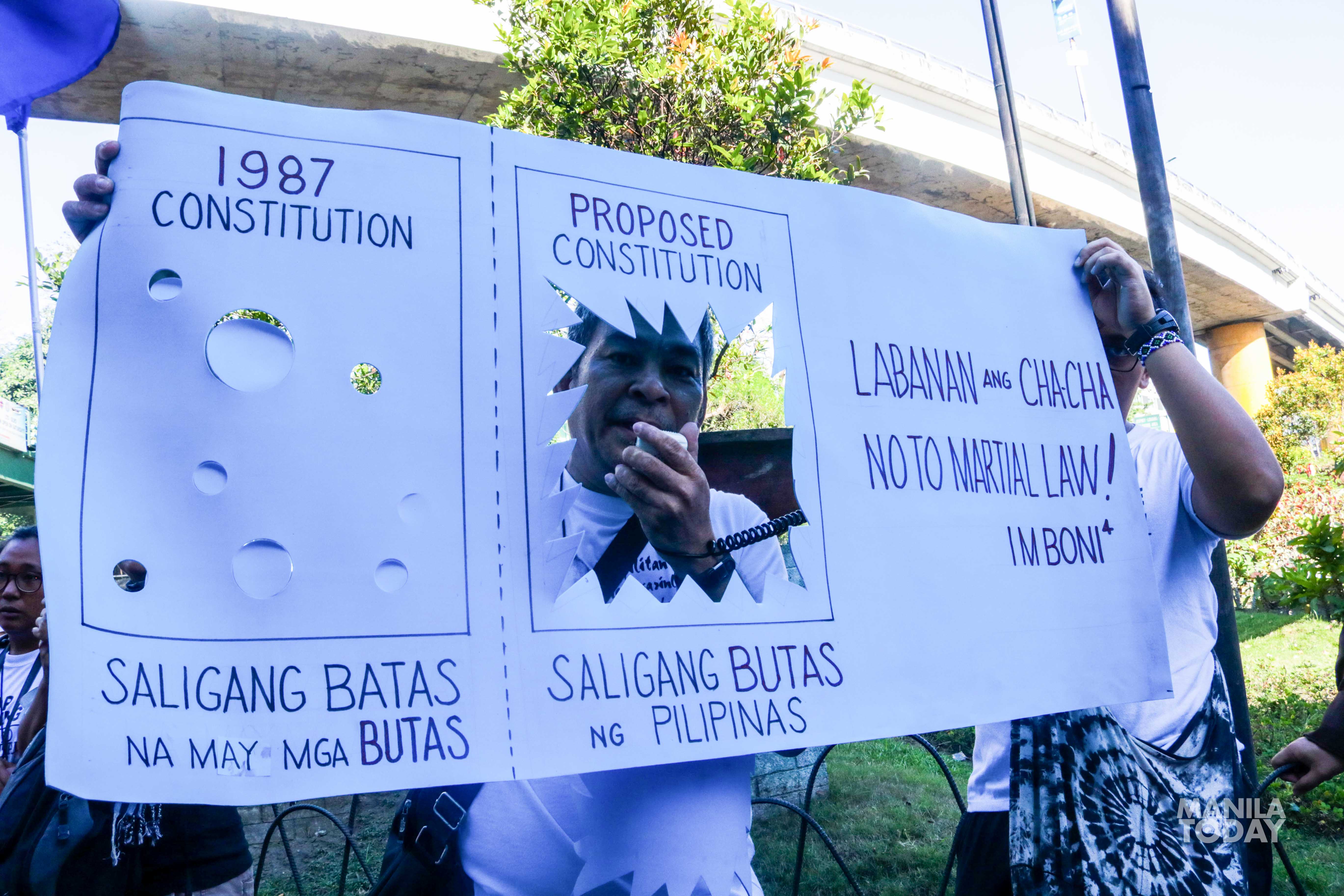 Church workers illustrate the difference between the 1987 Constitution—nicknamed the ‘Freedom Constitution’—and the proposed Constitution under Duterte’s Charter change. Photo by Joshua Acpal

The 1987 Constitution crafted under Corazon Aquino’s presidency was one of the first acts of the president to supposedly guarantee the democratic rights of the people. Even then, fundamentals rights such as the right to own land only remained on paper. Less than a year after People Power, 13 peasants were gunned down at the gates of Malacañang. Thousands of farmers marched to Mendiola on January 22, 1987 to demand Cory’s campaign promise of land reform. Their demands were met with bullets instead.

During his campaign, President Rodrigo Duterte rallied supporters to push for a federal form of government. Legislative measures are now underway to change the fundamental law of the land.

Neri Colmenares of the National Union of People’s Lawyers (NUPL) call Duterte’s Charter change “the worst” among the proposed changes in the Constitution that Duterte’s predecessors put forward. The president’s version of cha-cha would give him absolute powers, practically making him a dictator. 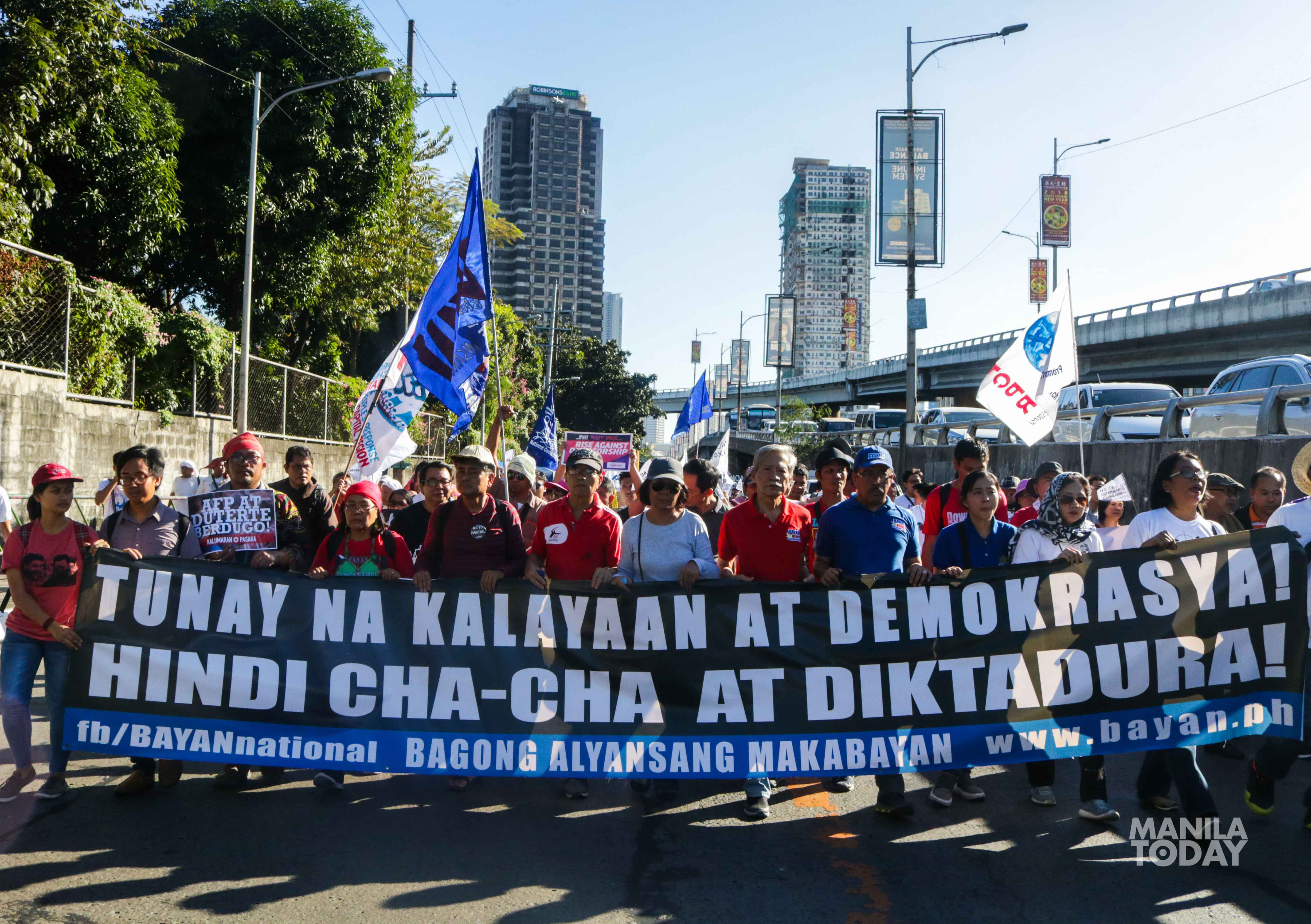 Bagong Alyansang Makabayan (BAYAN) leads the march to the People Power Monument. BAYAN played a significant role in mobilizing hundreds of thousands of people that led to the Marcos presidency’s downfall. Photo by Joshua Acpal 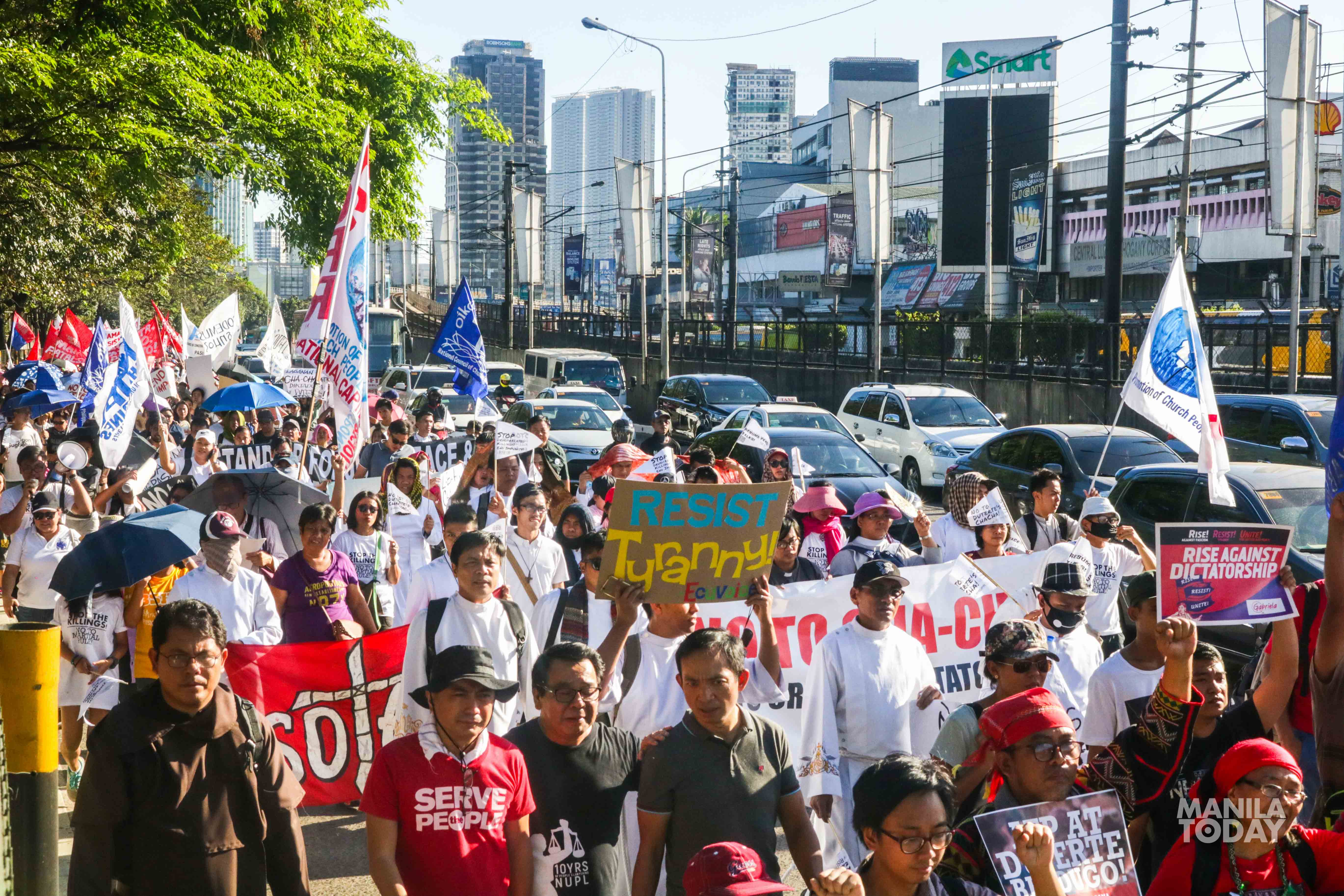 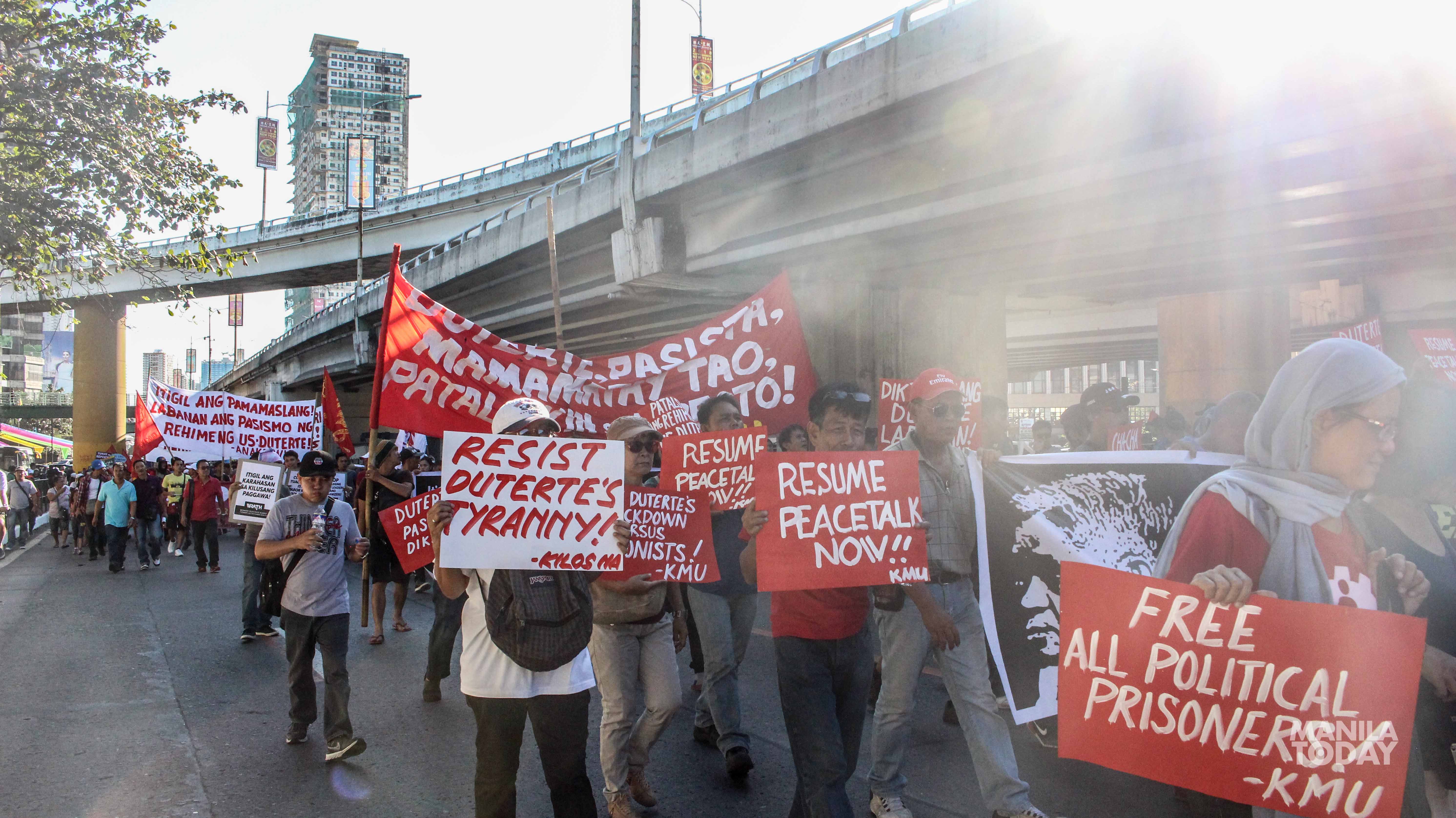 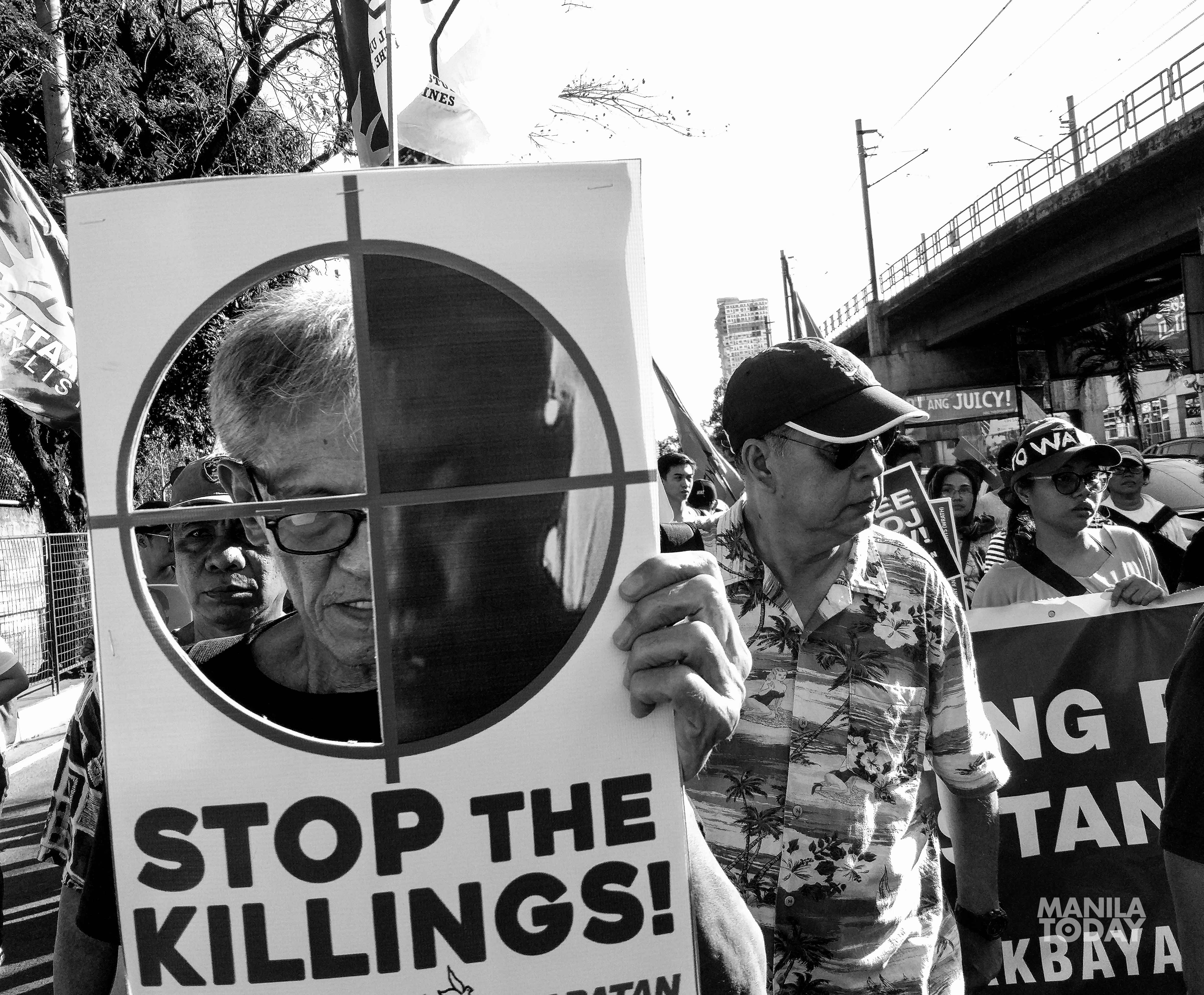 Danilo dela Fuente was one of the 70,000 who were tortured during Marcos’ martial law. He was subjected to electrocution, water cure, long hours of interrogation and psychological torture, and incarceration under harsh conditions. Photo by Erika Cruz 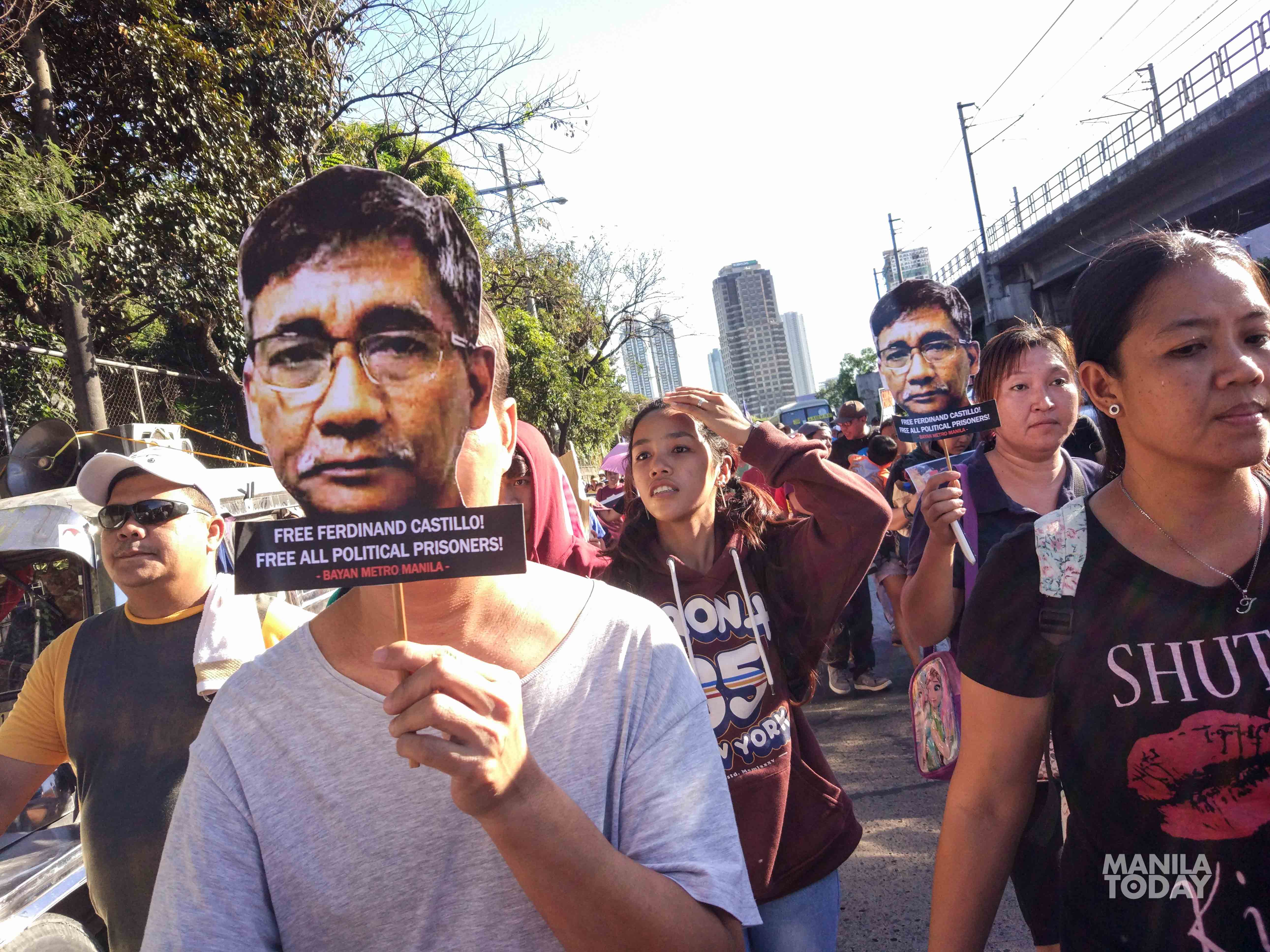 Today, there are over 400 political prisoners in the country. Sixty of them were arrestd under the Duterte administration. BAYAN Metro Manila campaign officer Ferdinand Castillo was arrested in February last year. Photo by Erika Cruz 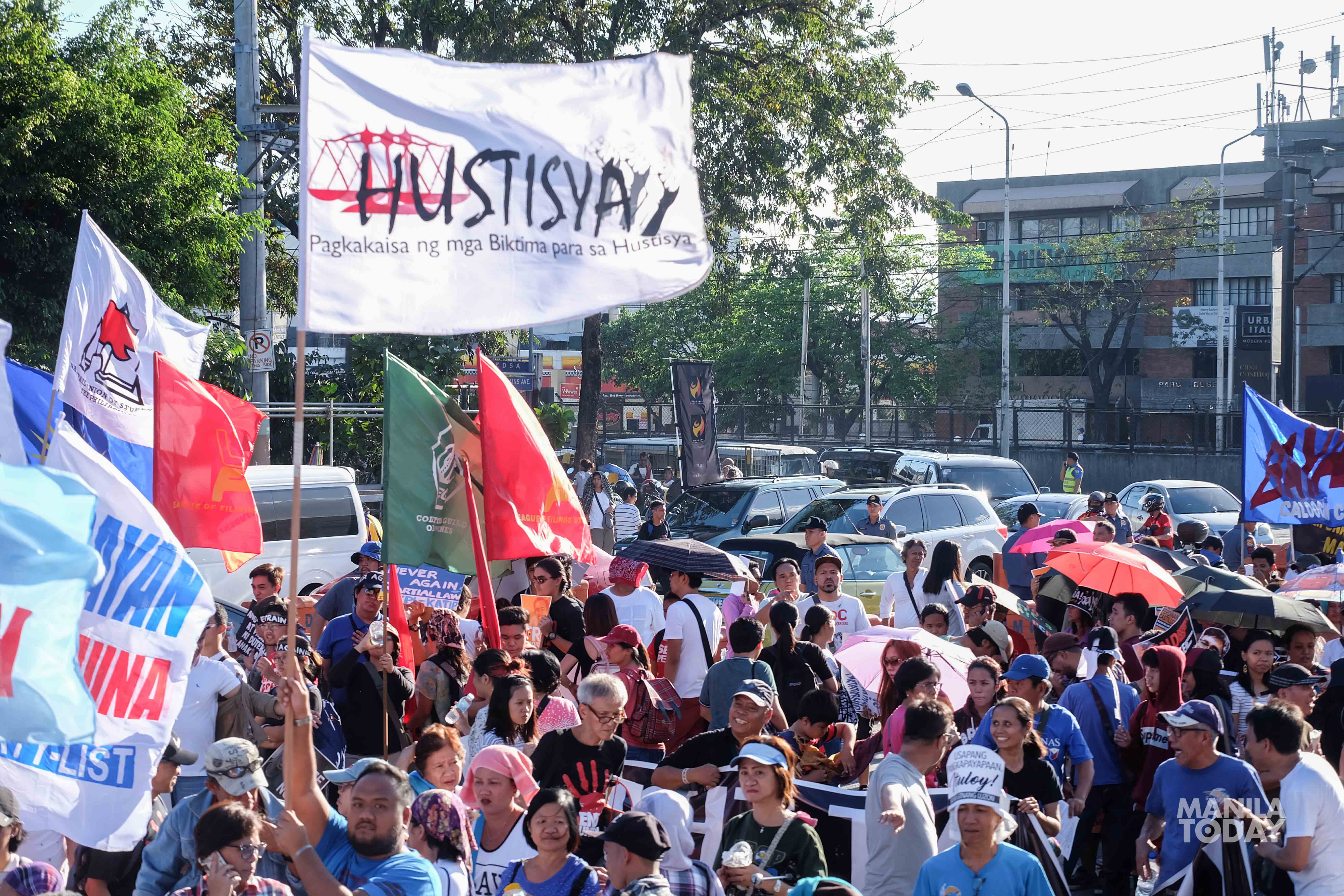 People from all sectors pour in at the People Power Monument. Photo by Rica Silva.

The Marcos regime inspired many to write and sing about freedom and democracy, among which is the iconic ‘Bayan Ko’. Shortly after Aquino came in power, a band formed in 1979 called The Jerks wrote a song about how the people suffered under a false democracy ruled still by elite families and a meddling United States government. 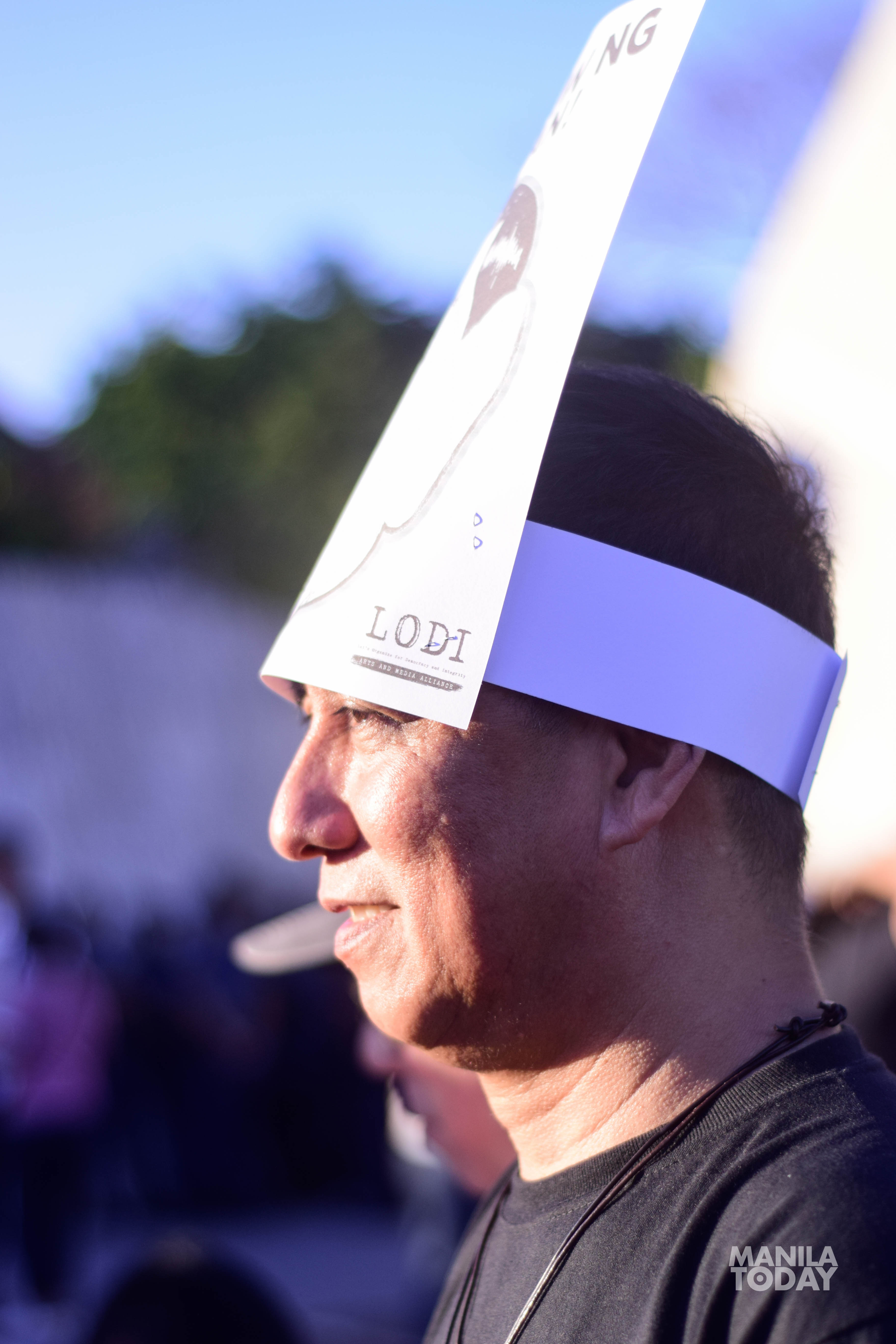 Nick, 56, is a psychologist and a member of Karapatan and LODI (Let’s Organize for Democracy and Integrity). By Lanz Varon and Marilou Morales

Like Nick’s family, Carla’s relatives are martial law veterans. She continues the fight against tyranny as she struggles for the emancipation of the LGBT. “Cha-cha is a tool to manipulate people,” she argues. 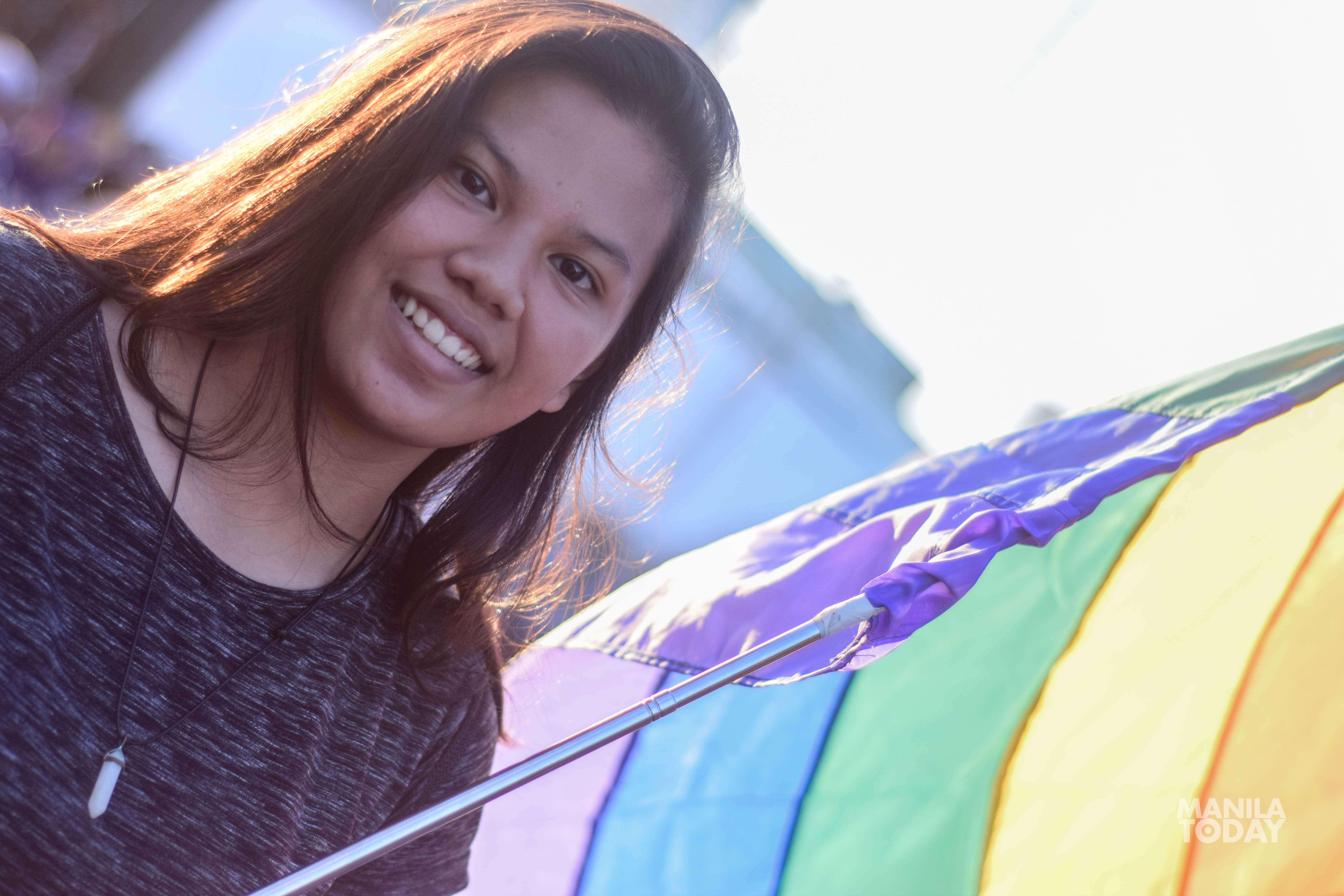 Carla, 17, is a student of Bulacan State University. By Lanz Varon and Marilou Morales.

Luis was already working in the docks when Marcos declared martial law in 1972. He now works as a crane operator at Harbour Centre Port Terminal, a privately owned establishment in Manila. Last year, Harbour Centre contractual workers won a Department of Labor and Employment (DOLE) case versus their employers, but many of them still work on a contractual basis. 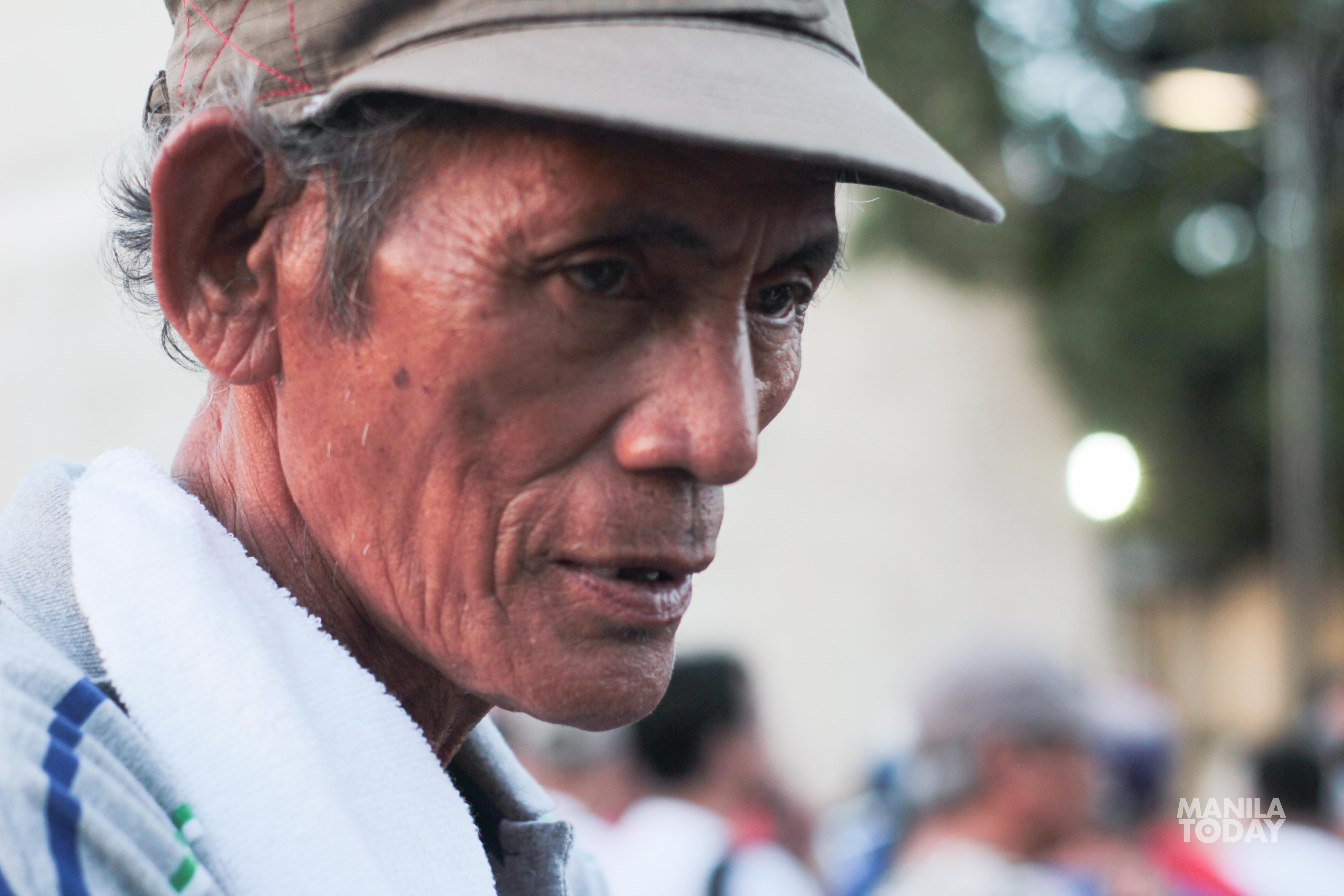 Luis, 56, attends the protest with his co-workers who are also members of Samahang Manggagawa sa Harbour Centre. 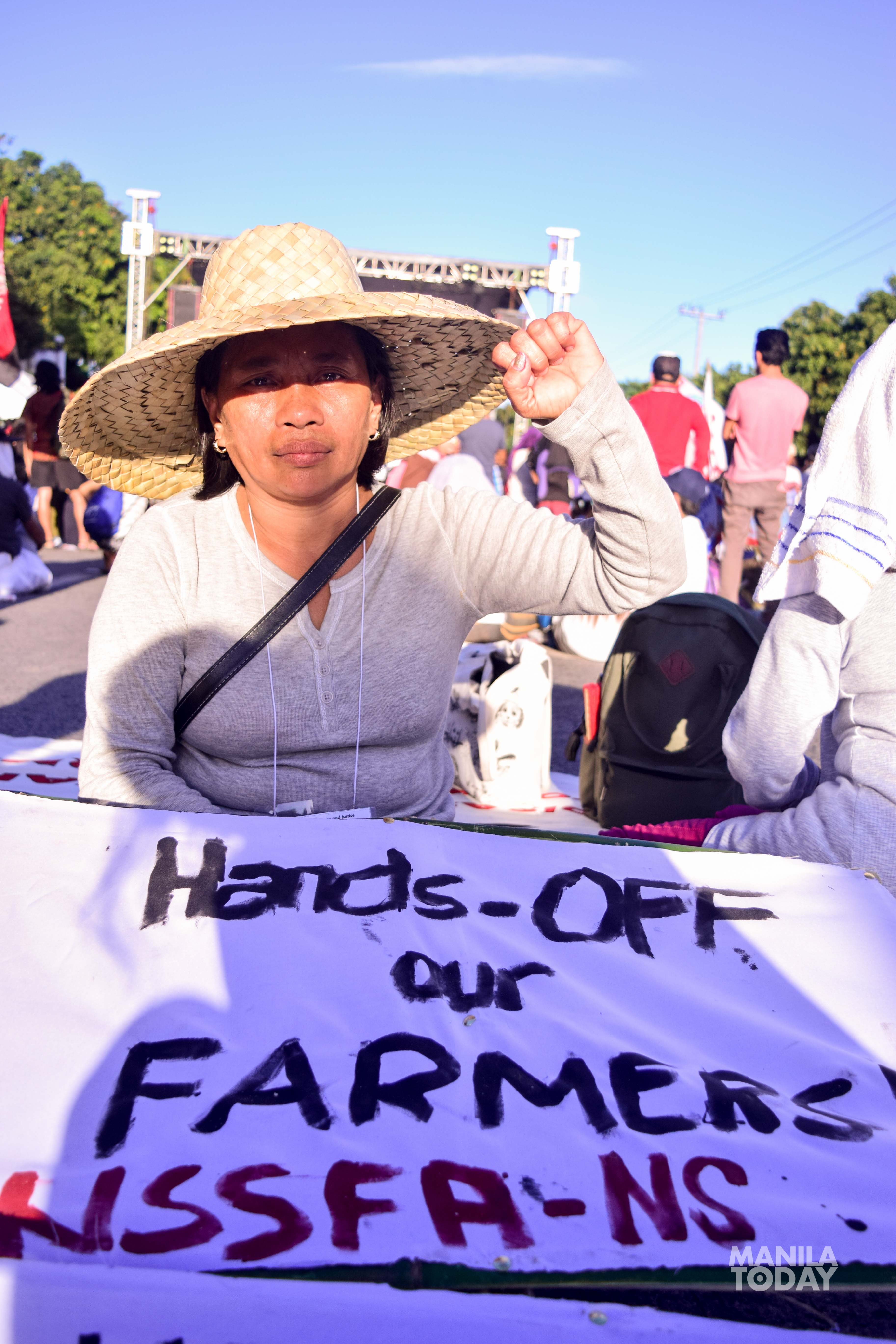 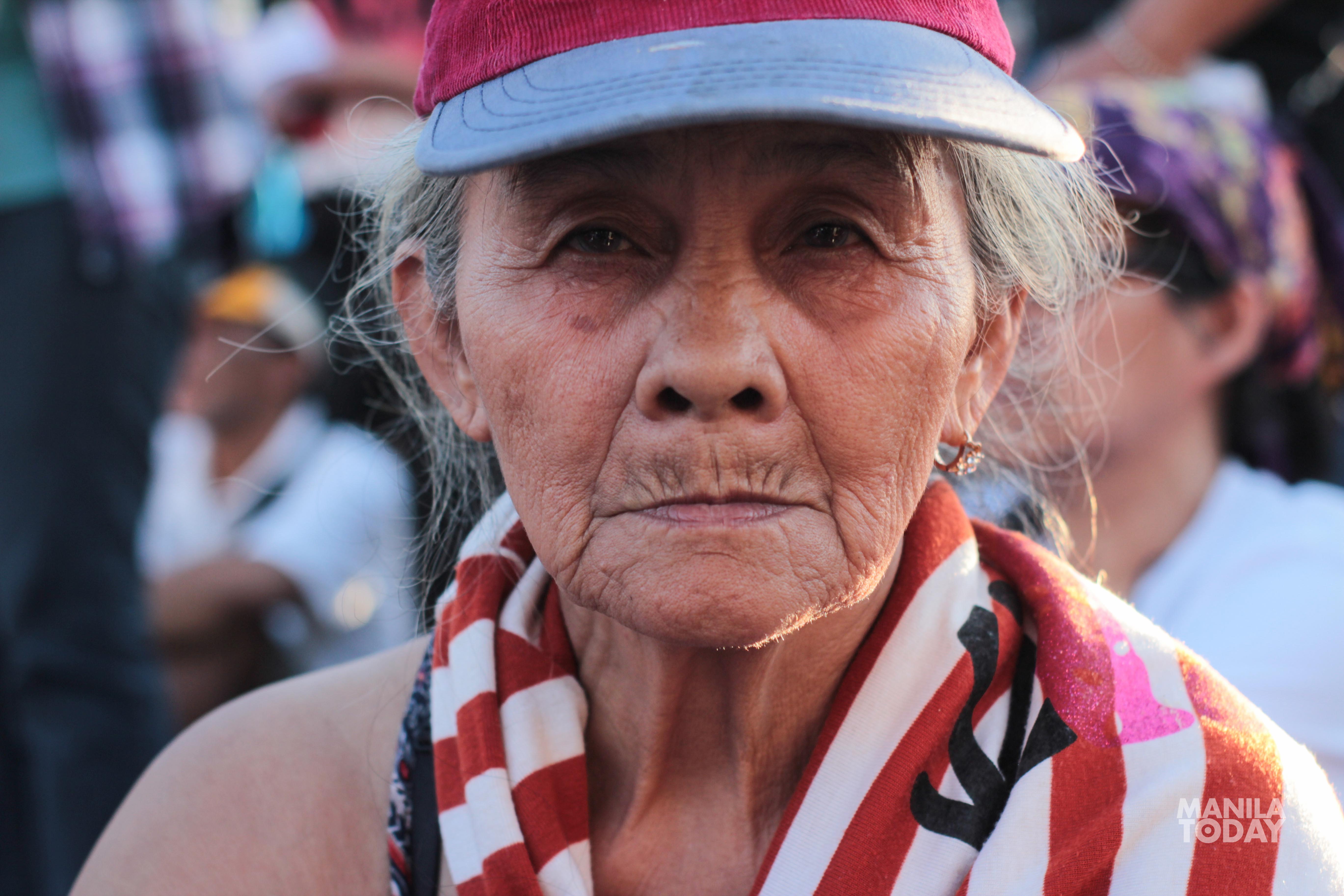 Doray lived through Marcos’ martial law and doesn’t want her grandchildren to grow up in a country ruled by another tyrannical leader. By Lanz Varon and Marilou Morales 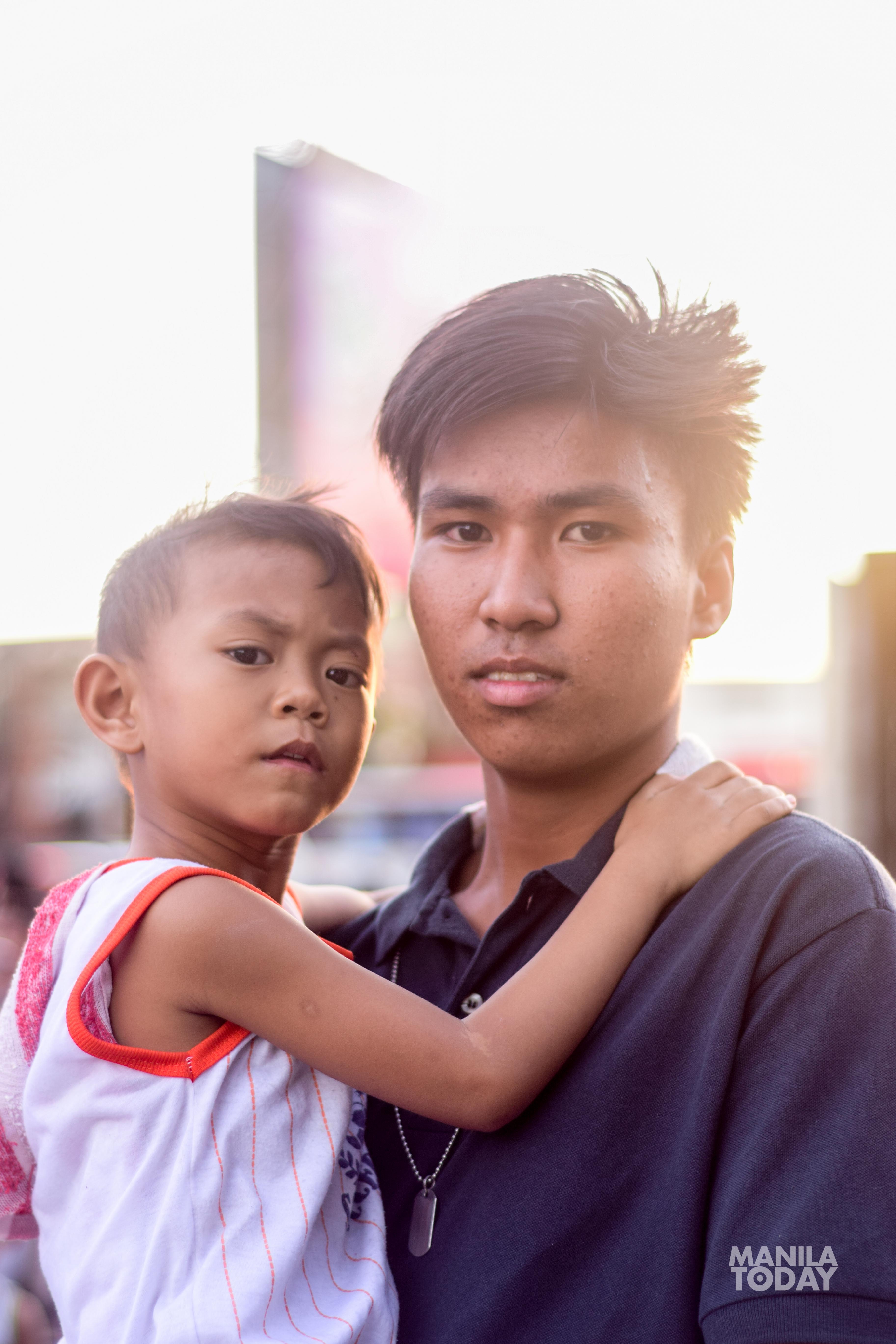 John Peter, 18, with his cousin Froilan. By Lanz Varon and Marilou Morales

The People Power Monument’s symbol of struggle and freedom was brought to life with speeches and performances by martial law veterans, youth activists, progressive leaders, artists, and relatives of political prisoners. It was a gathering of peace and struggle, of hope and resistance. 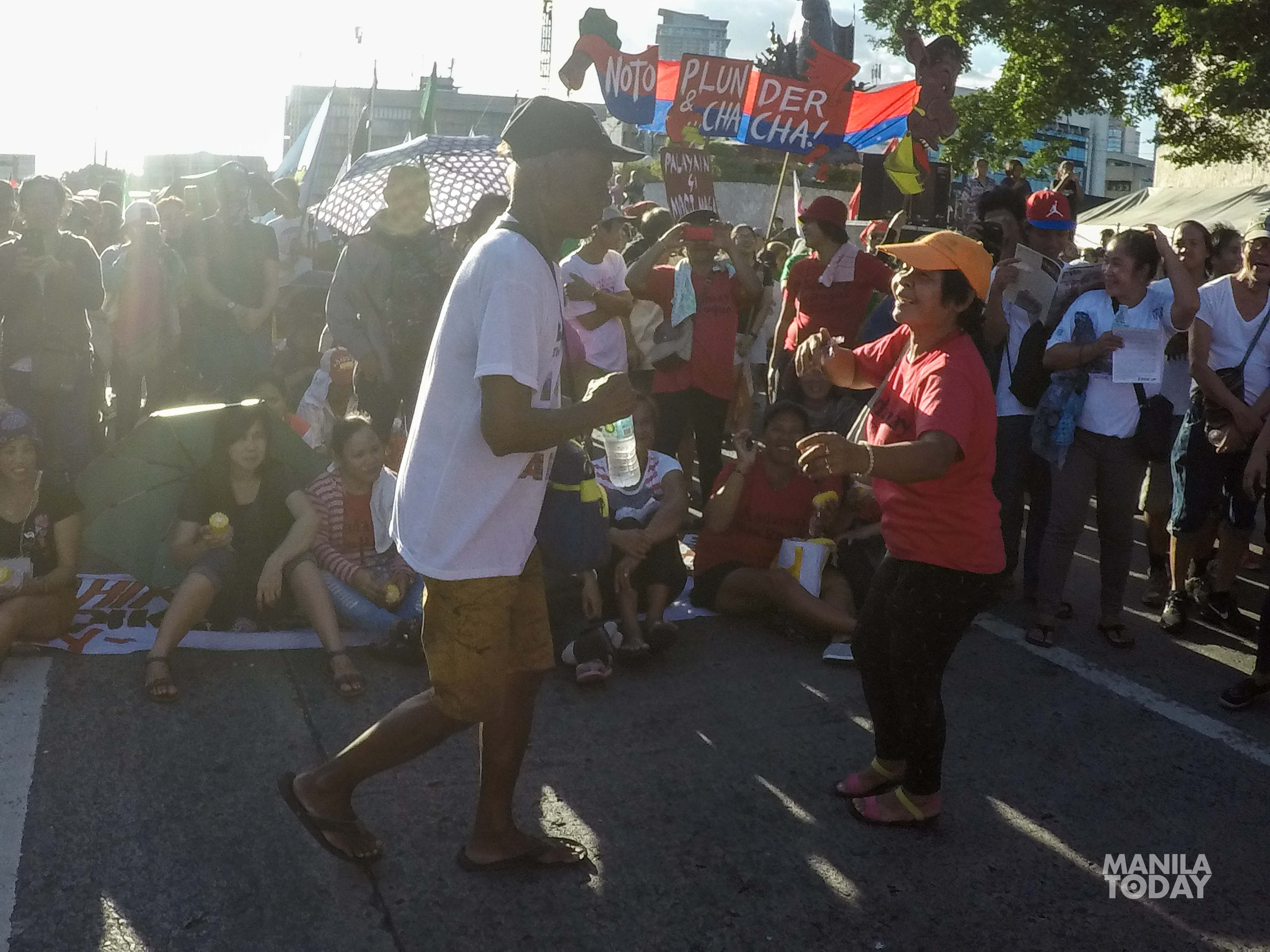 For farmers, the only cha-cha they want is the dance originating from Cuba but is widely popular in the Philippines. Photo by Patricia de Luna 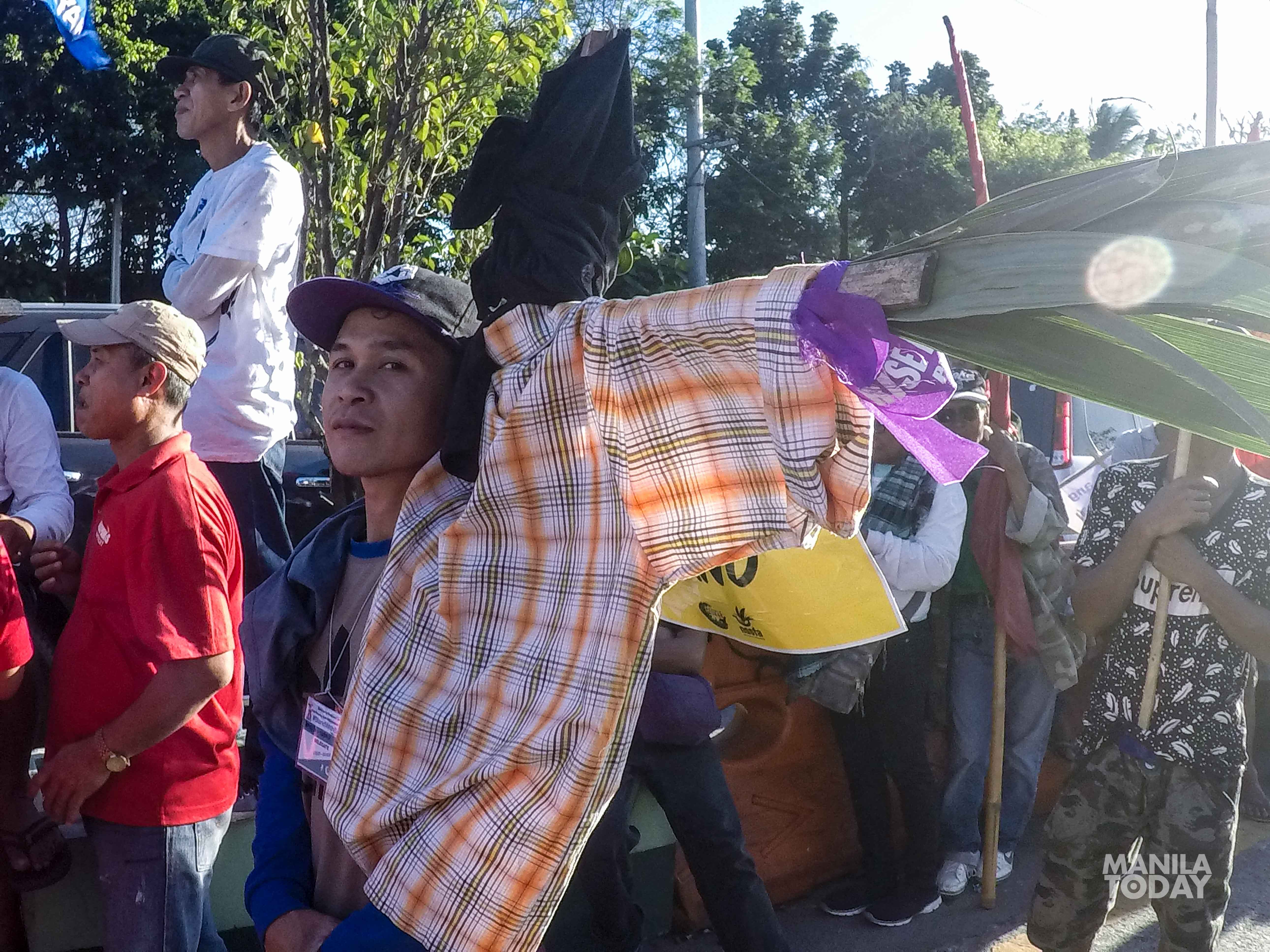 A farmer from Eastern Visayas carries a scarecrow to “scare off the crows in government who try to steal the freedom away from the people”. Photo by Patricia de Luna. 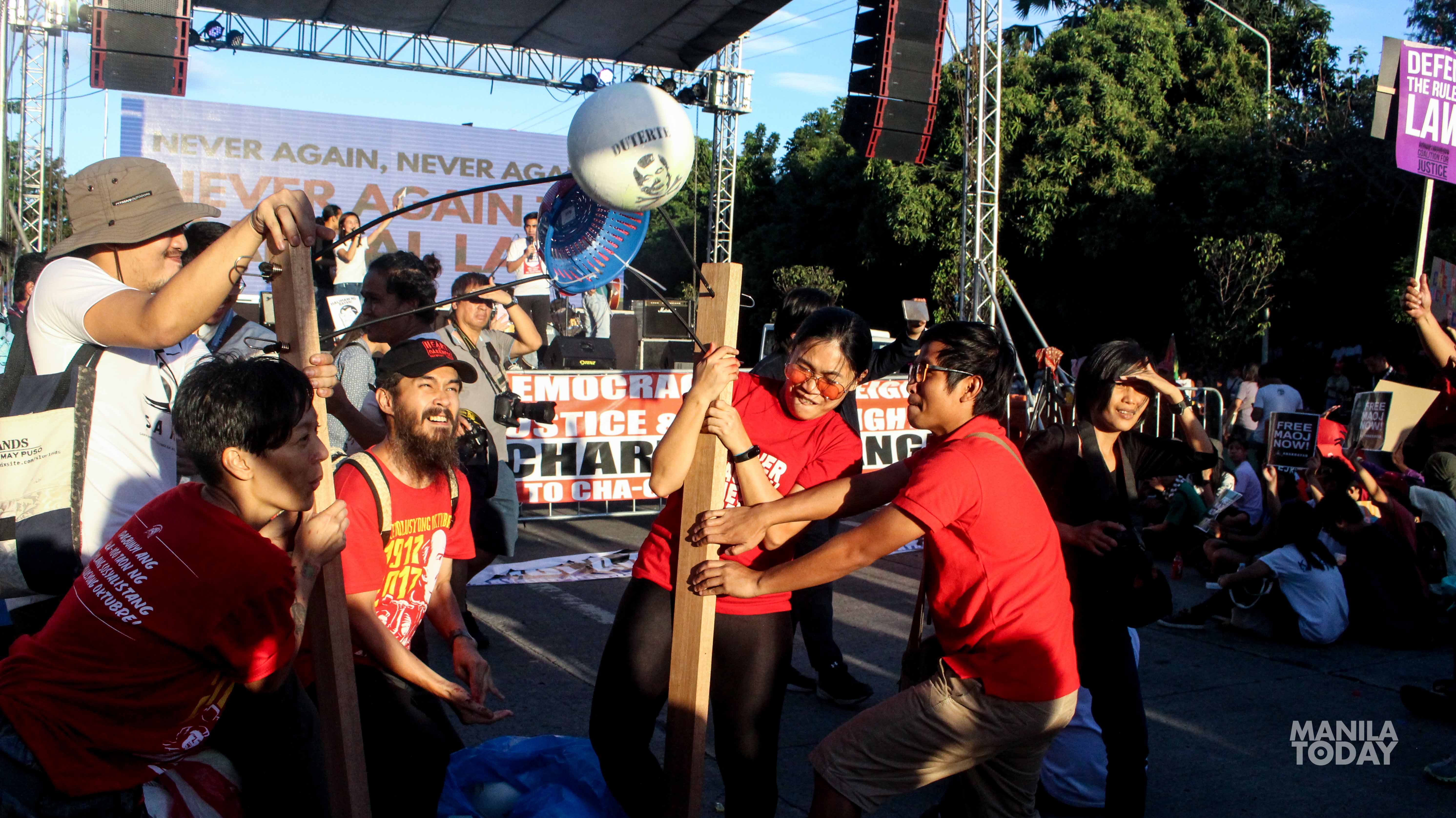 Members of Sama-samang Artista para sa Kilusang Agraryo (SAKA) “overthrows” Duterte by catapulting an image of him printed on a volleyball. Photo by Estelle Gwee 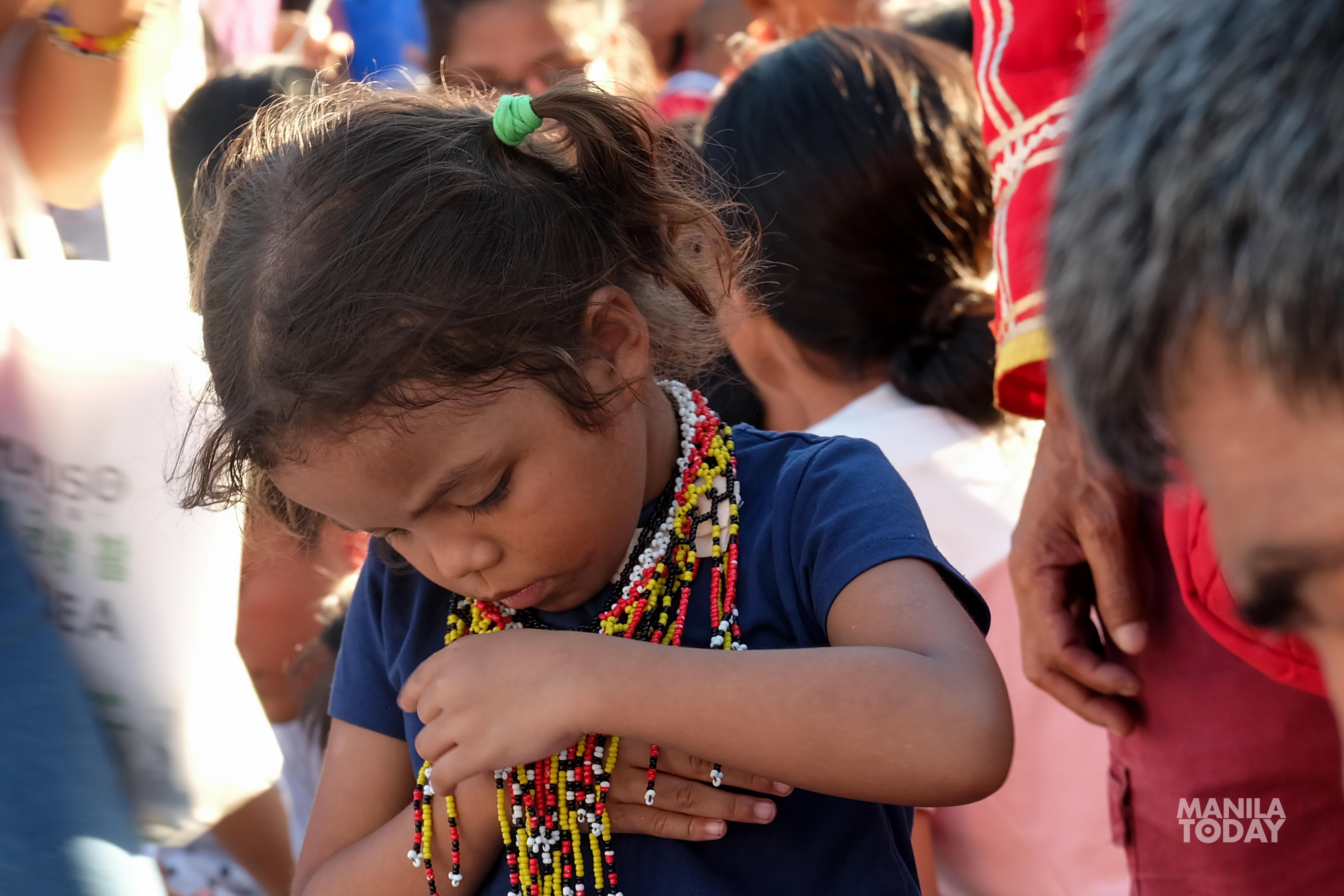 A young Lumad girl inspects her bead necklace. She and her mother are seeking sanctuary in a Manila church after her mother received death threats from the military for allegedly being a member of the New People’s Army in Bukidnon. Photo by Kate Simple 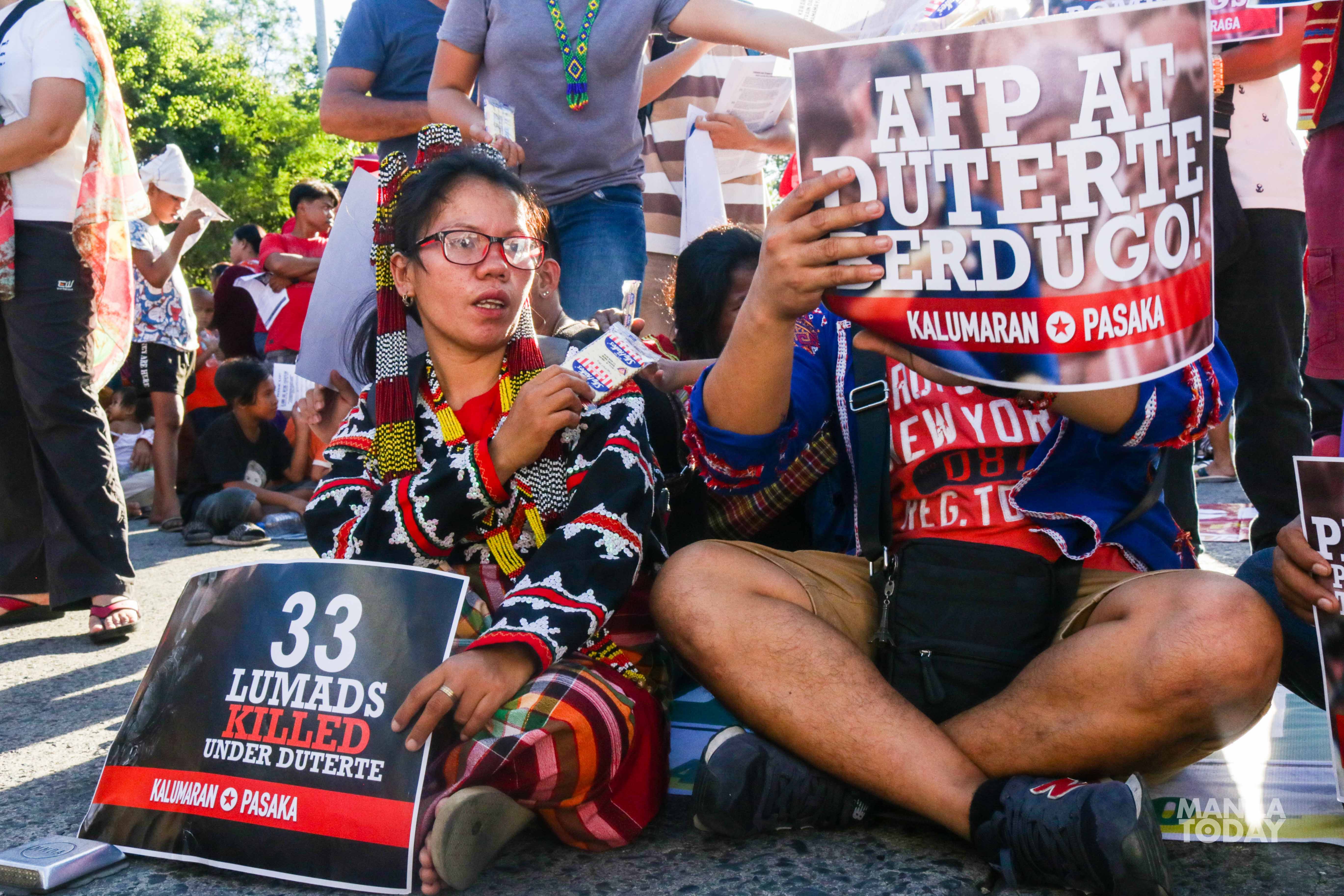 Around a hundred killings of indigenous peoples have been documented from July 2016 to the present. Under the Duterte government, 33 Lumad have been killed by members of the military or paramilitary groups. Photo by Joshua Acpal 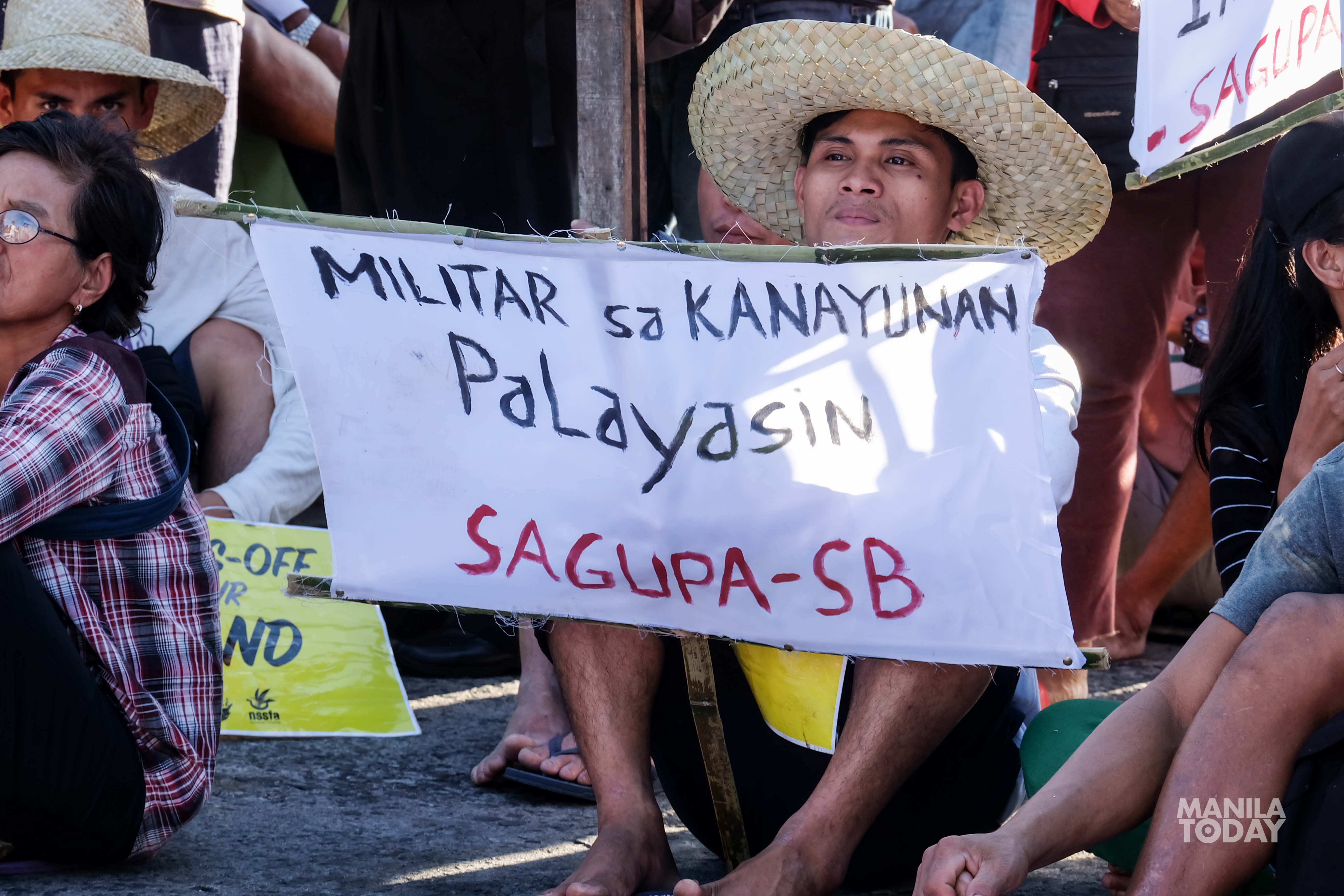 A farmer from Northern Samar calls to end militarization in their communities. The government’s ‘counter-insurgency’ program Oplan Kapayapaan seeks to crush New People’s Army guerrillas in the countryside, but largely targets civilians through encampment and aerial bombings. Photo by Kate Simple 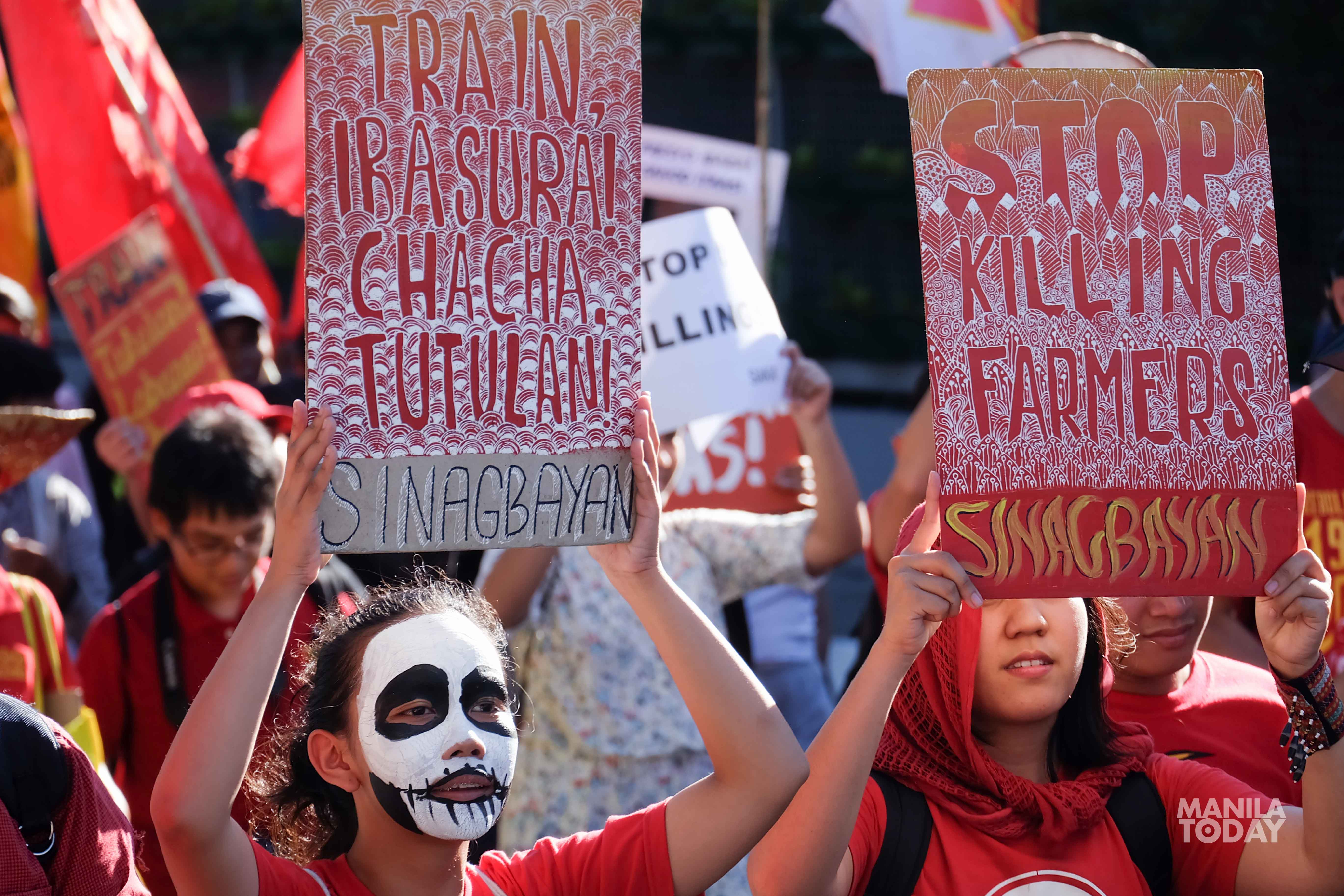 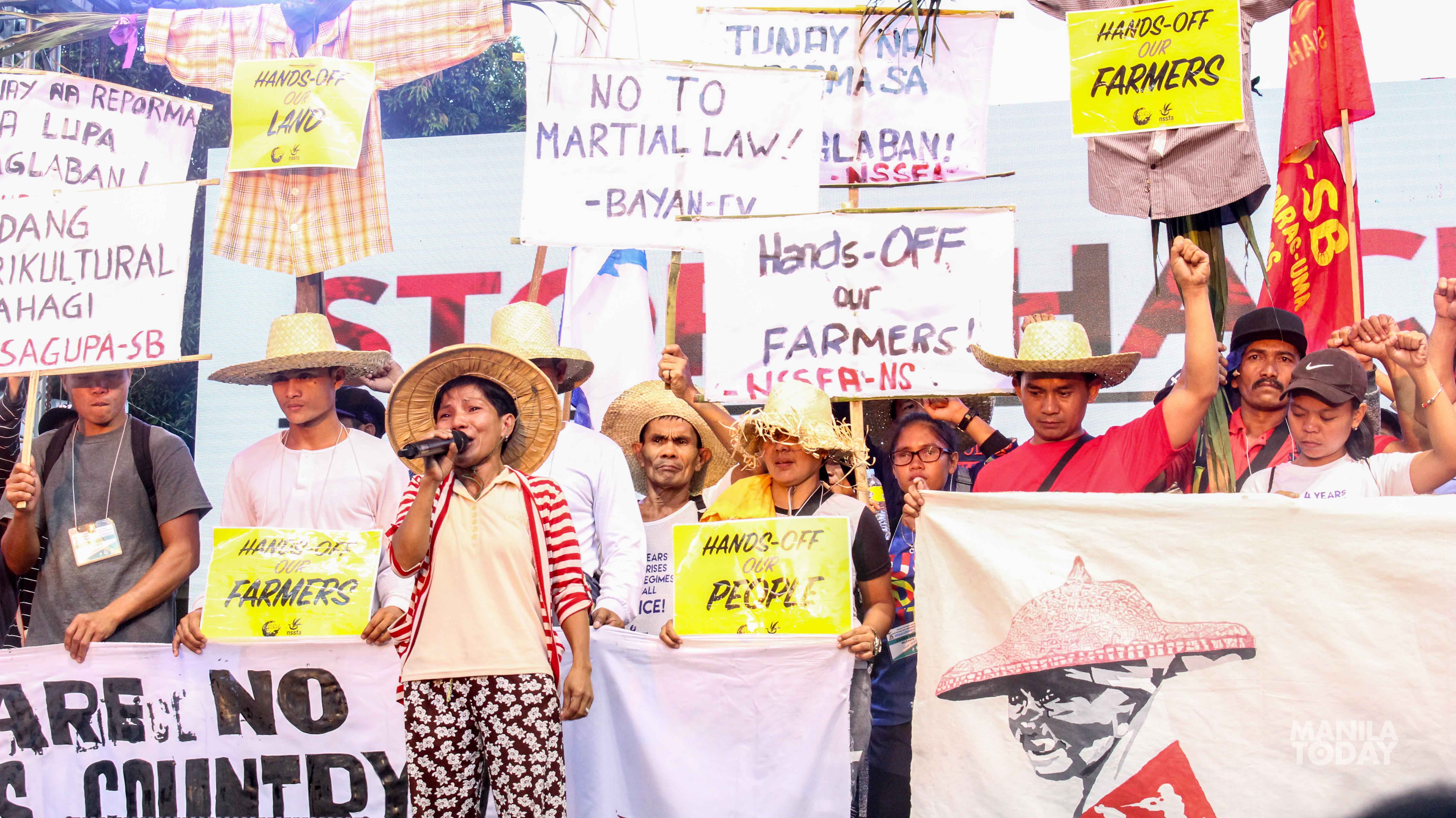 Farmers from Eastern Visayas address the crowd and the media. The farmers’ lakbayan in Metro Manila will be until March 8th. They are currently staying at the MCCCD-United Church of Christ in the Philippines in Manila. Photo by Estelle Gwee 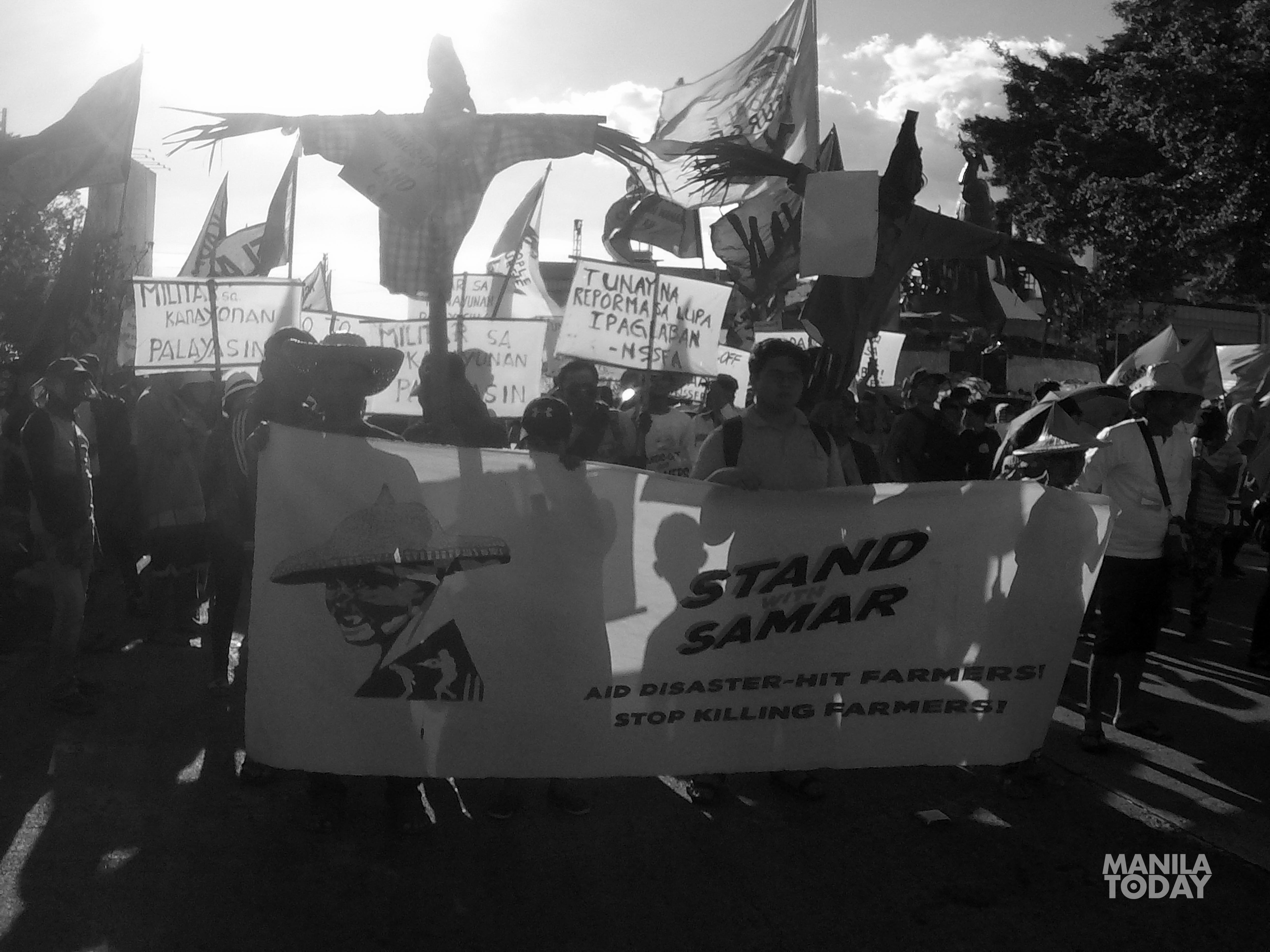 The Filipino people may have won the battle against Ferdinand Marcos in 1986. But, as the saying goes, the war isn’t over yet. Six Philippine presidents have since come to power, bearing slogans and policies that promised change. But, like “Bagong Lipunan”, a new society that is ruled by the broad masses is yet to be seen and felt.

The thousands who attended the anniversary protest of the Edsa People Power Revolt may have carried different calls, but their stories when weaved together form a single struggle: the struggle for genuine democracy and freedom from foreign intervention. Their shared struggle targets a common enemy: those few in power who forget that it’s the people who have the true power.

In the coming days and months, as the system allows leaders like Duterte to rule iron-handed over the people, those few will be reminded again and again that the revolution isn’t over. The people, as the poem by Dylan Thomas says, will “rage, rage against the dying of the light”. 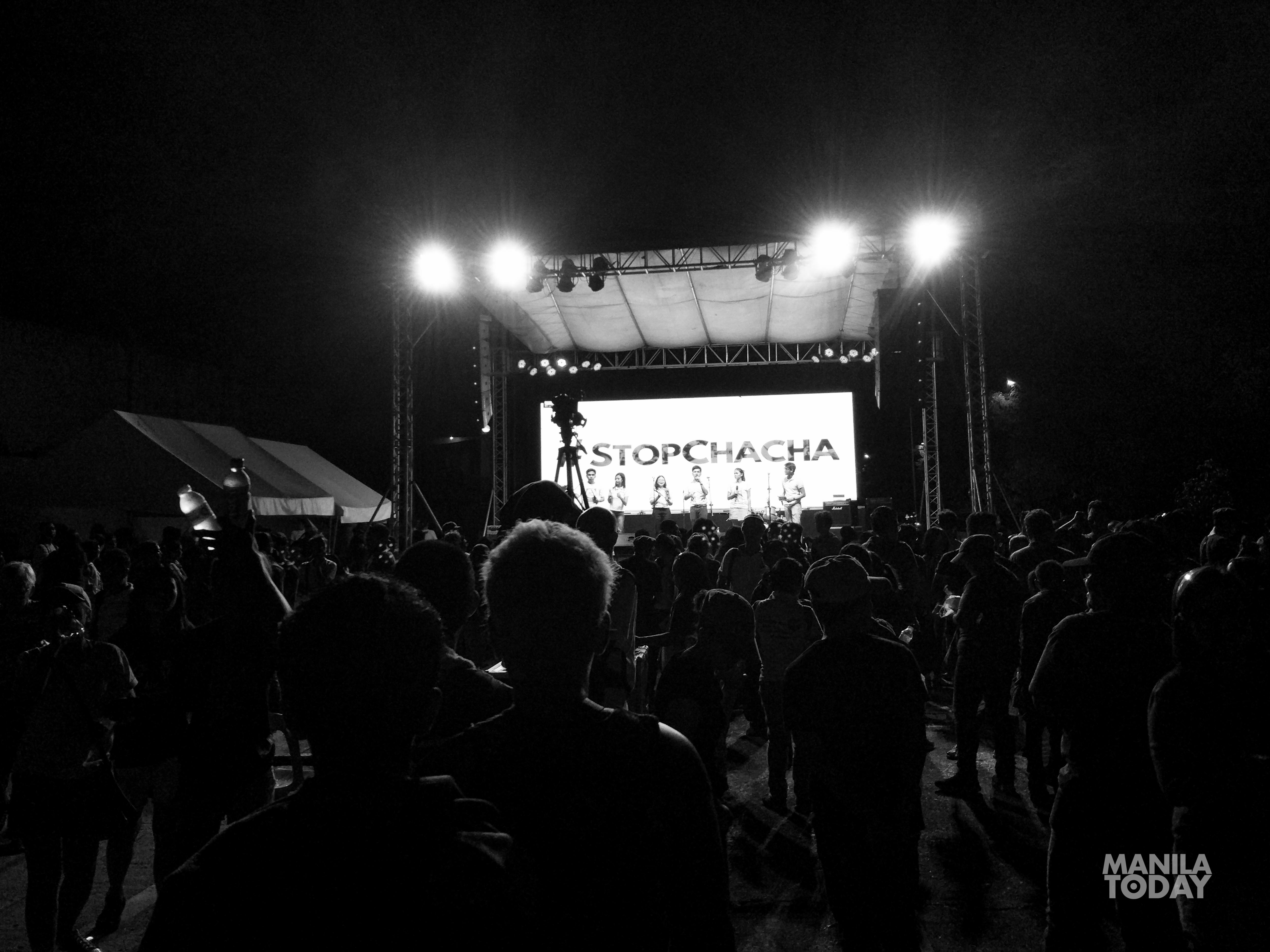 The post People have the power: EDSA 32 years on appeared first on Manila Today.