The shutdown of ABS-CBN is the biggest attack, so far, on the Philippine media since the pandemic.

MANILA– Two days after the Word Press Freedom Day, the Duterte administration shut down ABS-CBN, the largest broadcasting company in the Philippines.

The National Telecommunications Commission (NTC) issued a cease and desist order against the ABS-CBN as its franchise expires May 4.

The shutdown of ABS-CBN is the biggest attack, so far, on the Philippine media since the pandemic.

The Philippines dropped two places in the recent World Press Freedom Index released by Reporters Without Borders (RSF) for the year of 2020.

According to the Index, the Bayanihan To Heal as One Act had only highlighted the government’s attacks against the media. Since its implementation, the law has put at least two journalists in prison for spreading “fake news” about the COVID-19 pandemic.

“(The fake news provision) gives the government powers to prosecute any reporter or news organization publishing a report that displeases the Duterte government.”

Pandemic being used for media repression

In the online forum conducted by the Freedom For Media Freedom for All Network (FMFA) on May 4, the network pointed out how the media is being demonized for speaking out and calling out the government’s militaristic response on the health crisis.

Various attacks on free speech have been reported even before the implementation of the fake news provision.

Campus publications also experienced the backlash of the provision.

Today’s Carolinian editor-in-chief Berns Mitra was publicly called out by Cebu governor Gwendolyn Garcia for posting critical statements against the LGU’s response on the coronavirus.

At the same time, University of the East’s Dawn editor-in-chief, Joshua Molo was threatened with cyberlibel and was forced to do a public apology online for airing his critical comments about the administration.

In the sixth episode of Bulatlatan, Bulatlat managing editor Ronalyn Olea mentioned how the government has used the Luzon-wide quarantine to justify attempts to control information and stifle press freedom in the Philippines.

“We see an intensifying repression and chilling effect because of the new law that is being weaponized against the citizens,” said Olea.

The media accreditation implemented by the Inter-Agency Task Force (IATF), for example, has been used to limit the number of media outfits allowed to cover the pandemic. Alternative media outfits like Bulatlat, Kodao, and Altermidya were not given accreditation, and were blatantly told that mainstream media were given priority instead.

Community journalists outside of the Luzon-lockdown also reportedly experienced the same unfair treatment. The case of Zamboanga-based journalist Jonathan Jalon, whose media outfit failed to apply for accreditation, was evicted from Zamboanga City Hall for not carrying the identification card the local government had issued as a requirement for journalists covering the COVID-19 emergency.

The continuous red-tagging of critical journalists also did not stop during the health crisis, despite multiple media organization’s insistence that the media is an effective partner in this crucial time.

In Iloilo, seven community journalists were arrested on May 1, for allegedly violating Republic Act 11332, or the Mandatory Reporting of Notifiable Diseases and Health Events of Public Health Concern Act.

“The fight against the COVID-19 has been presented as a war, but that is more than just a metaphor,” said Center for Media Freedom and Responsibility Executive Director Melinda de Jesus, during FMFA’s online forum.

From January 1, 2019 to April 30, 2020, CMFR and NUJP had documented 61 incidents of threats and attacks against media workers; 3 of which are journalists who were killed for practicing their profession.

Half of the cases were allegedly perpetrated by state agents; from national government officials, senators, congressmen, LGUs, the military, and the police. 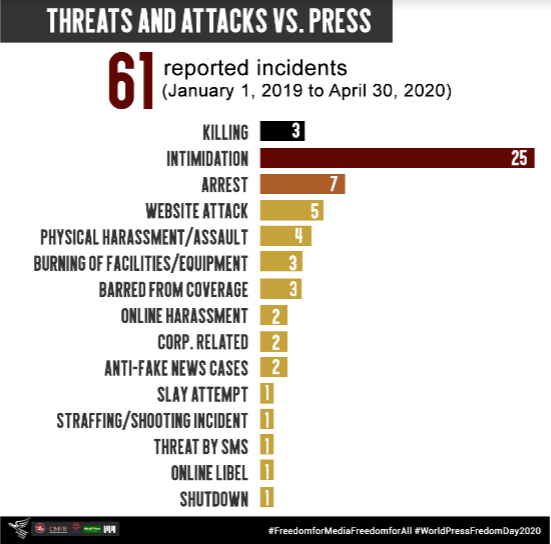 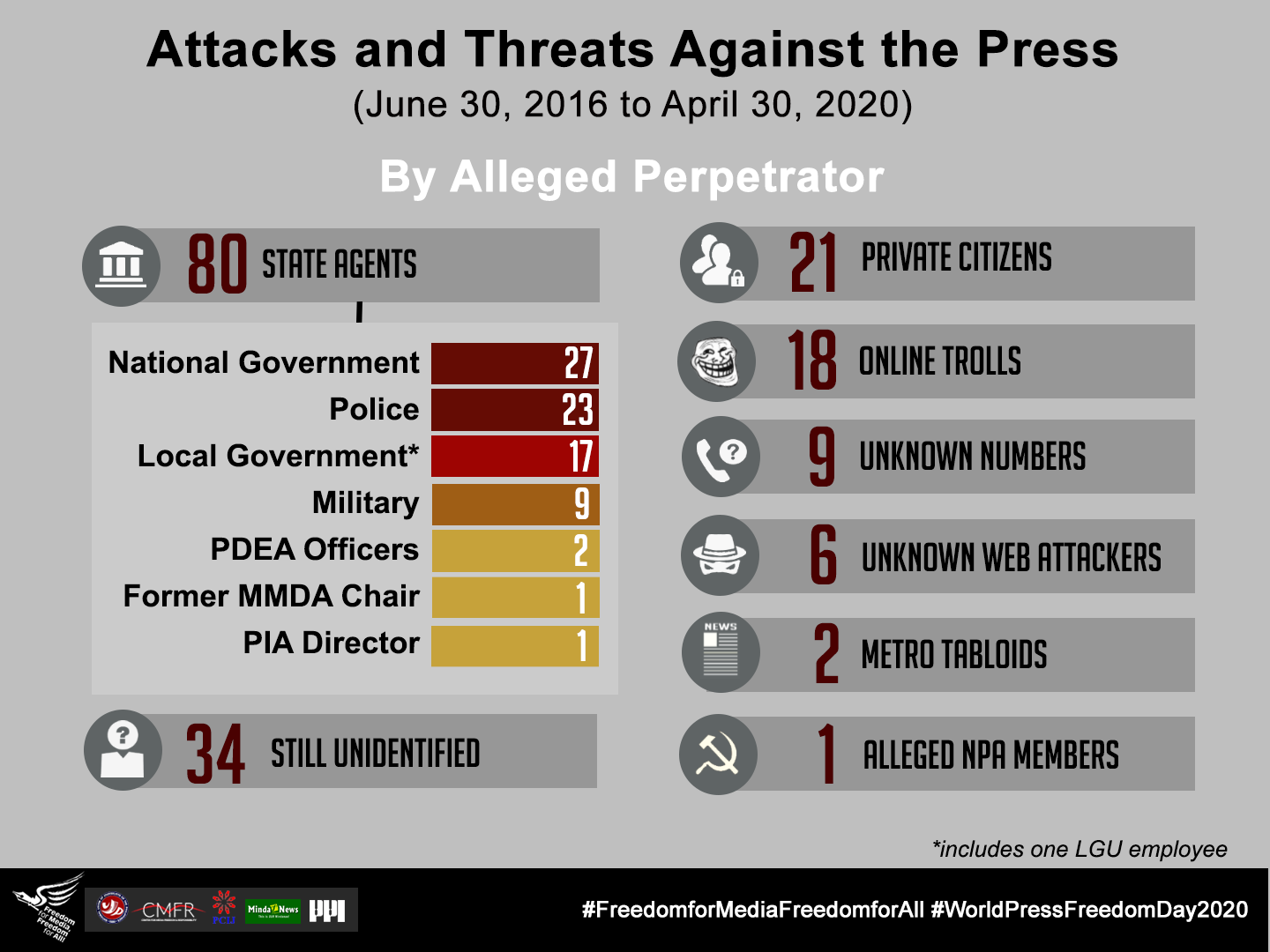 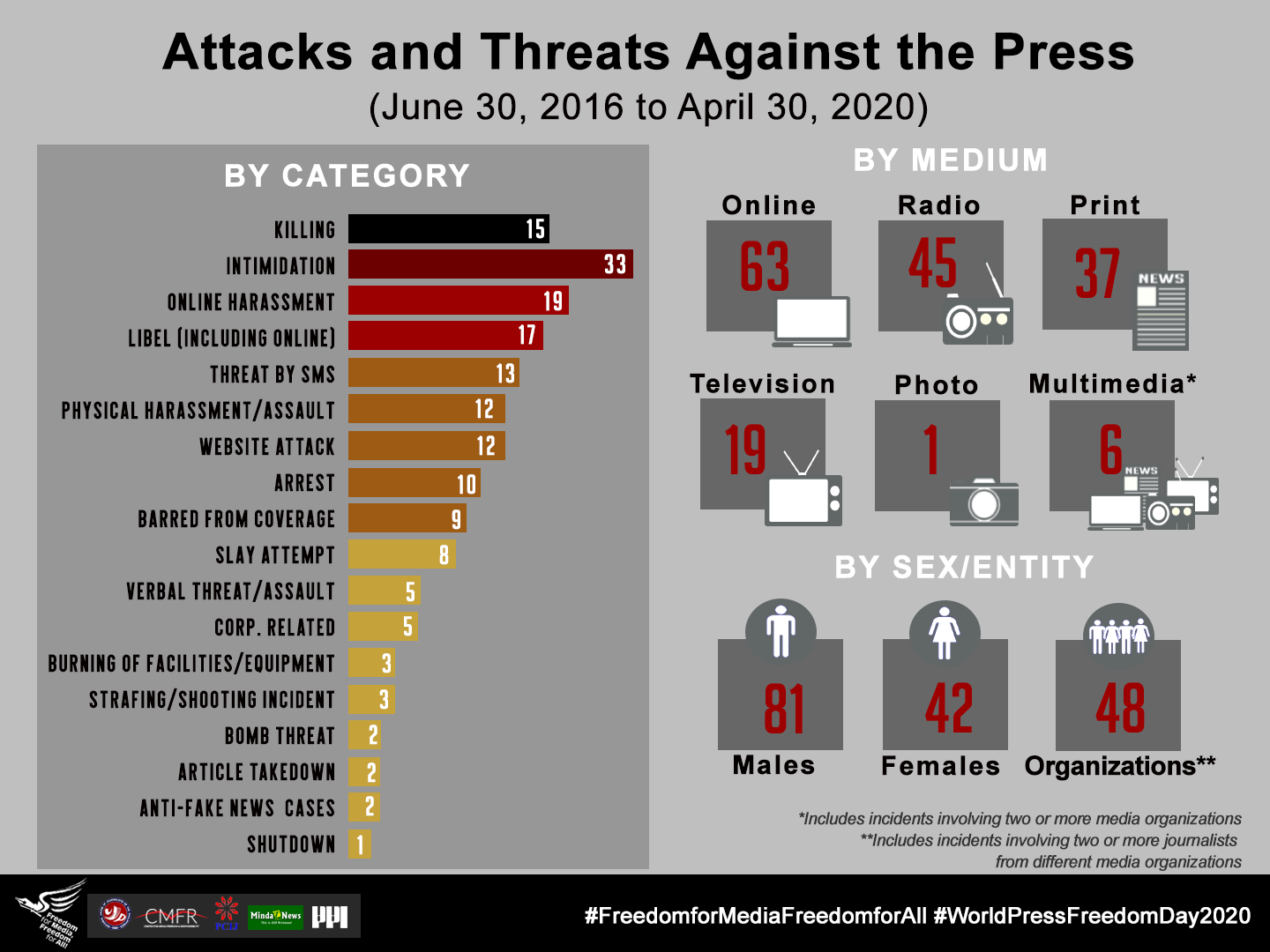 The group also mentioned how red-tagging and red baiting of critical journalists sometimes lead to serious harassment, and even arrest such as the case of Frenchie Mae Cumpio.

Cumpio, executive director of Eastern Vista, has been red-tagged and linked to the CPP after her reportage on the government’s response to Typhoon Yolanda in Tacloban. Since December 2019, Cumpio has been tailed, threatened, and surveyed by unknown individuals.

She was arrested on February 7, along with several other activists, for alleged illegal possession of firearms and explosives. Cumpio remains in detention until now.

In a letter, Committee to Protect Journalists (CPJ), along with 73 media and rights groups urged several Asian leaders to release jailed journalists amid the COVID-19 pandemic.

“For journalists jailed in countries affected by the virus, freedom is now a matter of life and death,” CPJ said.

According to the World Health Organization (WHO), people living in enclosed environments are likely to be more vulnerable to the COVID-19 disease than the general population.

“Journalism must not carry a death sentence,” it added.

The international group cites Article 19 of the Universal Declaration of Human Rights, guaranteeing everyone’s right to freedom of expression and opinion without interference.

“We urge you to release every jailed journalist in your respective countries, and to protect free press and the free flow of information at this crucial time,” the group said.

The post Philippine media as a casualty of the COVID-19 pandemic appeared first on Bulatlat.