Philippines has not flattened the curve – experts 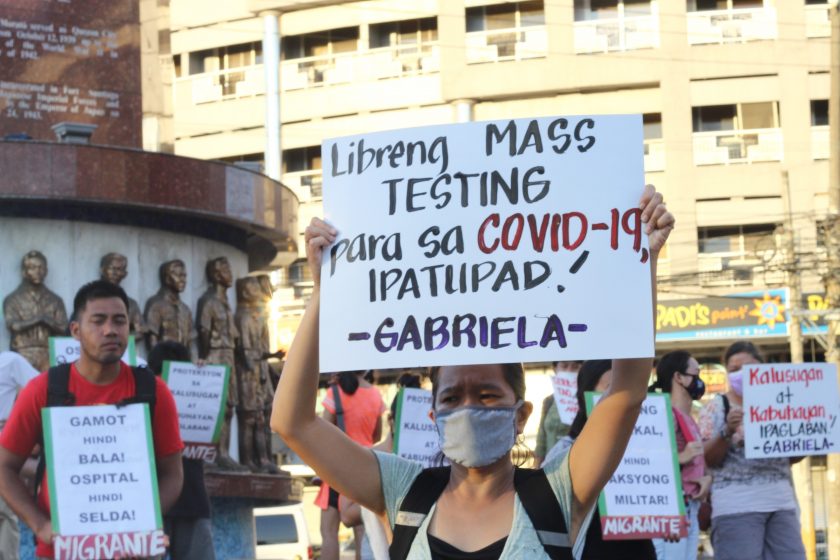 MANILA – After nearly two months of enhanced community quarantine in Luzon, the Philippines has not yet flattened the curve.

This was the statement of the Citizens Urgent Response to End COVID-19 (CURE Covid), contrary to earlier statements of an epidemiologist working with the Inter-Agency Task Force for Emerging Infectious Diseases.

Dr. Felix Muga II, a mathematics professor from Ateneo de Manila University, said that the number of positive cases of COVID-19 is still increasing. He added that with the large number of backlog tests of around 2,500, it would be difficult to ascertain that we have contained the disease.

“If this is what is happening everyday, how could we say that the curve has been flattened?” Muga said in a recent press briefing organized by CURE Covid.

Flattening the curve refers to efforts to slow down an outbreak and make it more manageable. It also refers to how a line graph looks when the number of new cases daily is no longer increasing or has stayed low.

“An example would be if of five COVID-19 patients, only three of them are able to infect others, that means our reproduction rate is less than 1,” he said. “At the moment, we are still hovering above one, so the curve has not been flattened.”

Dr. Julie Caguiat of the Coalition for People’s Right to Health also pointed out three elements in the fight against the COVID-19 pandemic, which she believed the government should prioritize – mass testing, a healthy health system, and positive social determinants of health.

Caguiat pointed out that it was only at the end of March that the government recognized the need for mass testing, and it was only on April 14, a month after the enhanced community quarantine was imposed in Metro Manila, that they actually started with the testing.

Caguiat added that most of these testing centers are in the National Capital Region, while those in the provinces are only able to serve limited patients because of the lack of testing kits and the slow delivery of the kits from the head office.

In Baguio, for example, the testing center can only do 10 tests per day.

She also pointed out that testing, as of the moment is only given to critical cases and not even health workers who are regularly exposed to COVID-19 patients are given regular tests.

“If we want to see the real picture of the spread of the disease, then the test must be given to a wider population,” she said.

Former Social Welfare and Development Secretary and CURE Covid-19 spokesperson Dr. Judy Taguiwalo said that when it comes to testing, it must be given for free, adding that even the Red Cross are asking for payment of around P3,500 per test.

A reflection of a desperate health system

Caguiat said that our inability to control the spread of COVID-19 is reflective of the desperate state of our health system.

Caguiat underscored how ill-prepared the government has been before the first case of COVID-19 was detected in the country. She said that by March, the spread of the disease has become uncontrollable, affecting even our doctors and nurses.

“We should have prepared for this, but even now we are having difficulty addressing the needs of our health workers and hospitals,” she said.

Caguiat said that even before the COVID-19 pandemic, they have been pushing for the government to increase the manpower of government hospitals, that the 17,000 available plantillas would be filled in, and for the deployment of 42,000 nurses to the communities.

“Now, COVID-designated hospitals are in need of 6,000 health professionals, but the Department of Health has only hired 750 personnel. Slow and limited,” she said.

Caguiat added that personal protective equipment (PPEs), ventilators and other equipment are lacking even in hospitals catering to COVID-19 patients.

Taguiwalo said that the government is making an effort to flatten the curve, it should also make an effort to raise the line in terms of improving the health system in the country.

“They are interconnected,” Taguiwalo said.

She stressed that in the fight against the pandemic, it is the people that is the most important element.

The community doctor said the poor, senior citizens and persons with disability are the most vulnerable to the disease and even to stress and anxiety at this time.

That is why, she said, that government must be able to clearly and effectively communicate information about the virus, the disease and even their plans in fighting the disease, especially when the planned lifting of the enhanced community quarantine in the region is fast approaching.

“Even if it takes a long time to find a solution to the pandemic, the government should not overlook the question of the people’s livelihood, their rights, housing, education, all of these are connected with how we address this problem,” she said.

Quarantine extension, difficult for the poor

However, they clarified that this doesn’t mean that the quarantine should also be extended.

Caguiat said that because we were not ready to face the pandemic, the government resorted to quarantine to be able to make up for its inefficiency in addressing the problem.

“The national government should dialogue with the local government,” Caguiat said. “There are some areas where the quarantine can already be lifted, but even then, the mass testing should be continuous.”

Muga also highlighted the importance of mass testing in the decision to lift the quarantine, as this would give us a better picture of the situation. Even so, he said that the lifting of the ECQ should be localized depending on the capacity and the situation of the place.

“What we want to see is how this ECQ is being used to stop the spread of the virus and not just to incarcerate the people in their homes while the government is not making any effort to aggressively conduct mass testing,” she said.

“We want the ECQ to be lifted, but we don’t want to risk our most vulnerable population to be exposed to the virus that is why there should be free mass testing together with a proper system for contact tracing, isolation and relief for those who really are in need,” Taguiwalo said.

The post Philippines has not flattened the curve – experts appeared first on Bulatlat.