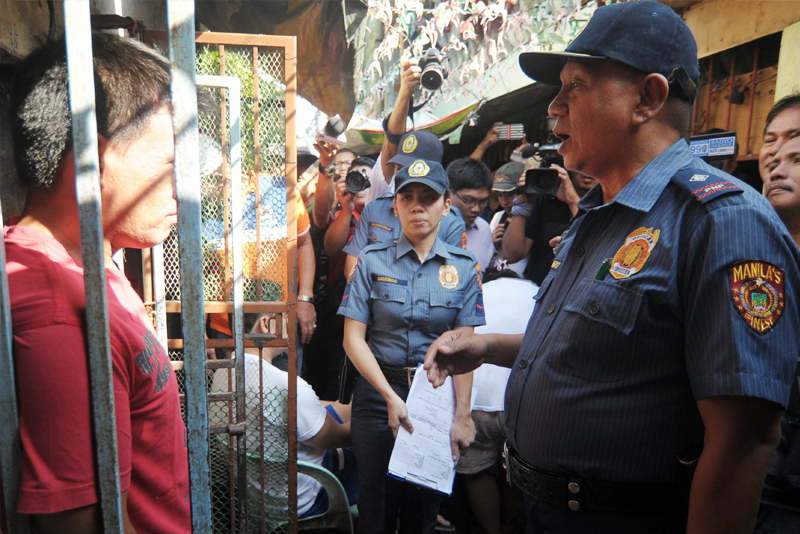 MANILA, Philippines — There is no guarantee that the relaunched “tokhang” will not result in bloodshed, Philippine National Police (PNP) chief Director Ronald dela Rosa said yesterday.

At Malacañang, presidential spokesman Harry Roque expressed hope the police “have learned from their experience” and would try their best to make sure community anti-drug operations or Oplan Tokhang “would be less bloody.”

The program made a comeback with an assurance from Dela Rosa that it would be free of violence if offenders agree to go peacefully with police.

But he could not promise a “foolproof anti-drug campaign that would be bloodless,” Dela Rosa stressed, explaining that police were “not dealing with people who are in their proper state of mind.”

“On the way of addressing this problem, we also have to protect ourselves, preserve our own life and the life of the stranger,” he said. “Now, tell me who among the police commanders can do it, and I will be willing to give up my post.

“We are just giving you the assurance we will try our best to make it less bloody,” he added. Tokhang operations, he said, would only be conducted between 8 a.m. and 5 p.m.

But Sen. Panfilo Lacson questioned the PNP’s move to limit “tokhang” to office hours and weekdays.

“I don’t understand why drug pushers will have a weekend holiday,” he said.

Lacson said as long as the provisions of the Revised Penal Code and the rules of engagement on arrests, especially warrantless arrests, are followed, “the law enforcement function of the PNP should be continuous.”

In Cebuano, “Tokhang” is a combination of the words “knock” and “plead.”

Besides the visits, police have also run so-called “buy-bust” or sting operations and raided suspected drug dens and laboratories.

In many of these operations, say rights activists, suspects did not get the chance to surrender, but were executed in cold blood. Police insist suspects died because they violently resisted arrest.

Nearly 4,000 drug suspects have died in gun battles with police since June 2016, when President Duterte came to power. The government lost 85 police and soldiers in the drug war, police data show.

More than 1.2 million people had also turned themselves in after the home visits.

Duterte stopped police anti-drug operations twice due to questions over the conduct of the operations.

The President, who has promised to continue his war on illegal drugs “until the last drug pusher is out of the streets,” has also vowed to protect policemen who shoot drug suspects in self defense.

But he has clarified that the protection does not cover law enforcers who commit crimes and abusive practices.

Roque welcomed the PNP’s statement reaffirming police commitment to the rule of law. He said the President has no instructions regarding the re-launched campaign, noting that the PNP has already issued new guidelines for law enforcers involved in drug raids.

Interior and local government department officer-in-charge Eduardo Año has said that the new Tokhang guidelines emphasize accountability of police personnel providing support to the Philippine Drug Enforcement Agency, which has been tasked to lead the campaign.

While the PNP promised a less bloody Tokhang, at least four suspected drug personalities in Quezon City, Pasig and Cavite were killed days before the relaunch of the anti-drug crackdown.

Last year, Duterte removed the PNP from the anti-drug war following the deaths of teenage drug suspects in Caloocan.

He restored the PNP’s role in the campaign after a few months because of the supposed “notable resurgence in illegal drug activities and crimes.”

The police officers involved would also undergo a vetting process to weed out rogue officers, said Dela Rosa, adding that past abuses had involved the police seeking bribes to drop the names of people from the lists they compiled.

“We are certainly hoping that it will be less controversial, because controversy will only blur the real intention, which is really the fight against dangerous drugs,” Roque told reporters.

“We are inviting the CRH to join all our Oplan Tokhang operations to erase once and for all accusations of EJK (extrajudicial killings) and other illegal activities by our Tokhangers,” said Albayalde in an interview.

Albayalde led the simultaneous re-launching of Oplan Tokhang in Metro Manila as he stressed that Tokhangers strictly passed a vetting process and background investigation.

The NCRPO chief said every tokhang operation would involve at least four policemen and village officials.

The PNP’s Directorate for Intelligence (DI) would pinpoint houses to be subjected to tokhang.

The Tokhangers would be in full uniform and unarmed, but would be accompanied by armed units depending on the security situation in the area of operation.

According to Albayalde, the Tokhangers would be different from the Station’s Drug Enforcement Unit (SDEU) which would separately conduct anti-drug operations in Metro Manila.

Tokhangers, based on rules, should not force subjects to come out of their houses.

“Those who turn themselves in or surrender would be brought to the barangay hall or police station where they would undergo documentation. They would be evaluated and first timers would be recommended for rehabilitation,” he said.

“When their subjects refuse to open their houses, the visiting Tokhangers would conduct a case buildup against them for the purposes of police operation later,” he added.

A total of 352 policemen have been dismissed from the service for various offenses since Dela Rosa’s assumption as PNP chief 18 months ago.

“Since I assumed as chief PNP, I have already dismissed 352 policemen for various offenses, 167 for drugs or drug-related, 155 others for kidnapping, murder, extortion, various offenses,” he told reporters in a press briefing yesterday.

The ranks of the dismissed policemen ranged from police officer 1 (PO1) to superintendent.

He said 329 more are facing administrative and criminal charges and might also be dismissed.

Quoting a report from the Directorate for Personnel and Records Management (DPRM), Dela Rosa said 146 of the 167 policemen dismissed for drug related reasons were found to be drug users.

As part of the internal cleansing in the police force, Dela Rosa reassigned 200 errant Metro Manila-based policemen to Mindanao.

The DPRM records also showed 21 other policemen arrested for alleged involvement in illegal drugs, 72 dismissed for being absent without leave (AWOL), 57 for offenses like immorality, estafa and dishonesty; 22 for murder and 15 for robbery extortion.

Eight other policemen were dismissed for charges of kidnapping; one for graft and malversation and one for rape, DPRM records showed.

Dela Rosa revealed the dismissal proceedings against a police senior superintendent remain pending before the Office of the President. He refused to name the officer.

The Office of the President handles dismissal proceedings against officers with ranks of senior superintendent and higher.

“The city director of Iloilo City allowed drugs to proliferate, and Odicta to lord it over the drug trade. There’s a case against the city director,” he said, apparently referring to alleged Iloilo drug lord Melvin Odicta Sr. and his wife Meriam, who were shot dead at the Caticlan Jetty Port in Aklan on Aug. 29, 2016.

Dela Rosa did not disclose details about the police officer.

He also revealed a policewoman is facing charges after she was caught in a casino in Cebu. “Despite our warning, some remain hardheaded,” he said.