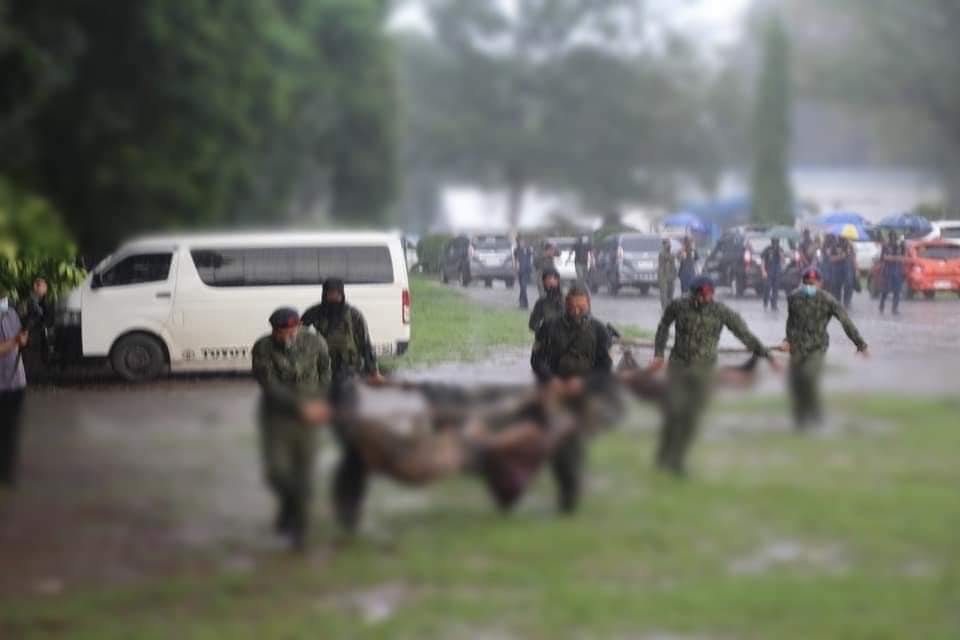 SANTA ROSA, Laguna – Elements of the Philippine National Police have taken the remains of three suspected members of the revolutionary New People’s Army to Camp Vicente Lim, Calamba, Laguna, and are “shrugging off all requests by their families” to claim them, according to human rights group Karapatan Southern Tagalog.

The families were informed that the remains were interred at Green Lawn Memorial Services in Calamba, August 5. Reveleen Cello, Deoscoro’s daughter, sought the assistance of Karapatan ST in retrieving the remains – the group arrived at Green Lawn on August 6.

When they arrived, no remains were found.

“The funeral home said that the police took the bodies again to bury them,” Reveleen said.

Green Lawn staff also informed them that police officers had the three remains go under autopsy, without the consent of any family member or relative.

According to Karapatan ST, the police threatened the attendants at Green Lawn to give them the remains of the three individuals, despite protests that Cello’s relatives were on the way. They assert that police cannot simply “take somebody’s remains without the express permission of family members, especially after an autopsy was done.”

Reveleen and the humanitarian team from Karapatan ST went to Camp Vicente Lim to claim the remains. They were delayed for three hours before a man in civilian clothes claiming to be from the PNP Regional Mobile Force Battalion 4A spoke with them to confirm that Cello’s remains were inside the camp, along with Masinas’ and Perdiguerra’s.

“Instead of mourning for our loved ones, we feel spiteful at the police officers who are denying the remains of our loved ones,” said Reveleen. “We are seeking justice, not only for the brutality that the police inflicted upon them, but also for the continuing denial of justice.”

Karapatan ST stressed that “NPA or not, everybody has the right to a decent burial.” The group is currently calling on the Commission on Human Rights and other groups to investigate the matter.

The group also alleged that the reason why Cello’s remains are being held is because of a police assertion that he was a high-ranking officer in the NPA’s Melito Glor Command, with a P3.8 million bounty above his head.

Not new under Duterte

Karapatan ST stressed that this wasn’t a new ‘modus operandi’ for the PNP. Last February 5, the remains of two peasant activists, Emerito Pinza and Romy Candor, were found hastily buried under false names in a cemetery in Calamba. Like Cello, Masinas, and Pedriguerra, they were also killed by police officers in Kalayaan, Laguna.

The PNP insisted that Pinza and Candor were members of the NPA. They also released a statement that they assisted family members and relatives in burying them.

Karapatan ST debunked the statement, with Pinza’s wife flat-out stating that she had not seen her husband’s remains.

The truth came out when the remains of the two were found in mislabeled graves in a local Calamba cemetery.

Aside from the three individuals, the 2nd Infantry Division of the AFP also reported an alleged encounter in Kalayaan, during the late hours of April 7. Karapatan ST is also currently looking into the facts of the matter.

Karapatan ST insisted that these were violations of the Comprehensive Agreement on Respect for Human Rights and International Humanitarian Law (CARHRIHL).

Under CARHRIHL, the right to decent burial is guaranteed. (Bulatlat.com)