Political prisoner in Tagum dies due to illness 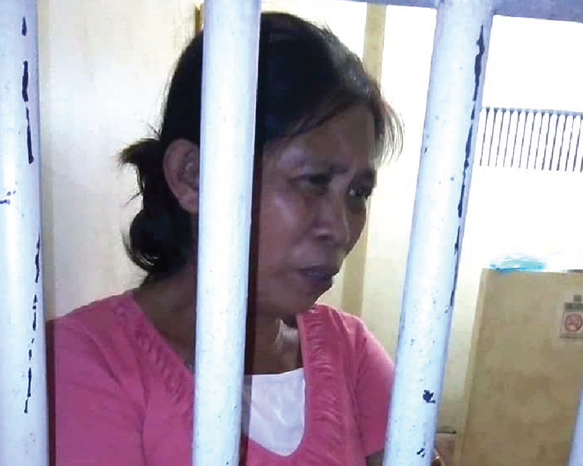 “Her untimely death underscores the failure of the prison system to provide even the most basic health care for treatable illnesses that justifies the petition we filed at the Supreme Court seeking the humanitarian release of the elderly and the sick who are most vulnerable to succumbing to the pandemic.”

MANILA – A political prisoner died on May 4 in Tagum City, Davao del Norte.

Adelaida “Nanay Ede” Macusang, 61, was rushed to the hospital after complaining of severe stomach pain and nausea. However, she was declared dead on arrival.

According to human rights group Karapatan, doctors initial findings stated that Macusang succumbed to kidney failure and cardiac arrest. Prior to her arrest, Macusang had already been diagnosed with severe hypertension and cardiomegaly, or a medical condition in which the heart is enlarged. She died without being tested for coronavirus disease 2019 (COVID-19.)

Macusang, a member of the Montevista Farmers Association, was arrested on March 28, 2018. She was slapped with with trumped-up charges of illegal possession of firearms and explosives. She was detained at Davao del Norte Provincial Rehabilitation Center.

Kapatid, and organization of families and friends of political prisoners, meanwhile, asserted that COVID-29 test should still be conducted “as a protective priority to mitigate the spread of the contagion inside the provincial prison center.”

“Her untimely death underscores the failure of the prison system to provide even the most basic health care for treatable illnesses that justifies the petition we filed at the Supreme Court seeking the humanitarian release of the elderly and the sick who are most vulnerable to succumbing to the pandemic,” Kapatid said in a statement.

The groups expressed alarm over Macusang’s death especially with the onslaught of the pandemic in detention facilities in the country. They reiterated their plea to the Supreme Court to heed their call to free prisoners on humanitarian grounds before it’s too late.

“Even the death of one detainee is already alarming enough, especially when high congestion rates, the lack of adequate medical and sanitation facilities, and the subhuman conditions in our prisons mean that the disease can easily spread, infect, and kill more prisoners, especially the most vulnerable,” Karapatan Deputy Secretary General Roneo Clamor said.

He added that the government should act to curb the transmission of the virus in jails as there are reports of increasing cases of COVID-19 positive inmates as well as staff of detention centers.

On May 5, the SC deliberated on the petition to release prisoners on humanitarian grounds to prevent the spread of COVID-19 in jails.

Based on reports, there are now 333 detainees who are COVID-19 positive in Cebu City Jail, Quezon City Jail has nine PDLs and nine staff, Correction Institute for Women has 47 detainees and two died of the virus.

“The warped basis of her political imprisonment should have long been trounced had the most basic rights to due process, equal protection of the law, and the right against unreasonable searches and seizures been diligently upheld. Her age and underlying illnesses could have qualified her for humanitarian release had the wheels of justice on our petition moved faster and immediately yielded positive results,” Kapatid said.

The post Political prisoner in Tagum dies due to illness appeared first on Bulatlat.