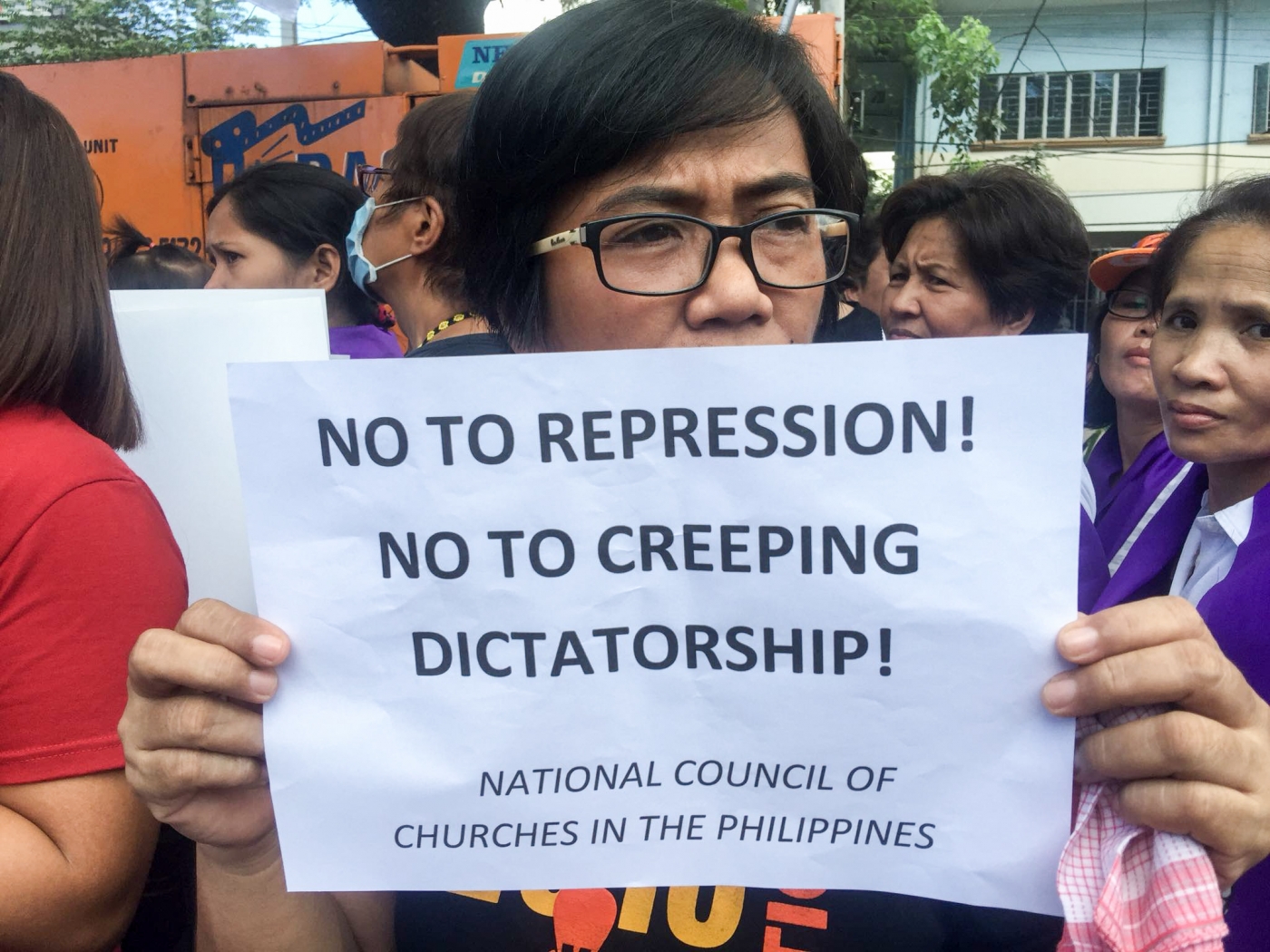 Thousands marched to the House of Representatives in Quezon City today to call for the defense of Supreme Court (SC) Chief Justice (CJ) Maria Lourdes Sereno and of judicial independence in the light of the ongoing move of the Duterte government to remove Sereno in office.

Led by the Coalition for Justice (CFJ), Movement Against Tyranny (MAT) and Bagong Alyansang Makabayan (Bayan), pro-democracy groups slammed the continuing and orchestrated moves to unseat Sereno and pave the way for a Duterte appointee to take the helm of the High Court.

Also present in the broad protest were law students, farmers from Eastern Visayas, Lumads from Mindanao, Church groups, among others.

Bayan, in their statement given to media, decried the use of a ‘judicial bulldozer’ to remove the Chief Justice from her post through the quo warranto proceedings that will be discussed by the SC en banc today. They said that “this is a desperate move by the Duterte regime, through the Solicitor General, to unseat the Chief Justice through means other than the pending impeachment process.”

“If the SC gives die course to the petition, it will set a very bad precedent. Such proceedings can and will be used against other justices of the SC in the future. It will be a sword of Damocles held by the Executive branch over the Judiciary. No one is safe from being removed,” said Renato Reyes, secretary general of Bayan.

He added, “The people demand for an independent Supreme Court, one that is free from the dictates or influence by the current Malacañang occupant. We stand for checks and balance in government against authoritarian rule and tyranny.”

Among the groups that marched in solidarity of CJ Sereno were member churches of the National Council of Churches in the Philippines (NCCP) and the United Church of Christ in the Philippines (UCCP). Aside from expressing support for Sereno, they also bared their calls to uphold the rule of law and resist tyranny.

The NCCP also speaks of the consequences of political actions done with impunity and those which compromise seriously the checks and balances that are inherent in the three branches of the Philippine government. They aired concern that in the current polarized state of the country, “impeaching CJ will create animosity more than the national unity it aims to achieve.”

“We call upon our constituency to continue praying and working towards social justice that encourages accountability for those in power for the good of the nation and its people,” said Rev. Rex RB Reyes, General Secretary of the NCCP.

Meanwhile, anti-dictatorship farmers from Eastern Visayas also aired support for Sereno and joined the rally today. They believed that “the supposed bases for the impeachment of CJ Sereno are only cover-up of the real intent to expel her and for the Duterte presidency to take a stranglehold of the Judiciary.”

Sagupa Sinirangan Bisayas (SAGUPA-SB) also called Duterte as ‘power-hungry’ for hitting personalities who oppose his anti-people policies. They also lambasted lawmakers who are using their positions to satisfy their master (Duterte).

Jun Berino, spokesperson of SAGUPA-SB insisted, “Sereno is one of the very few vocal government leaders who oppose Duterte’s de facto martial law and his will to impose such declaration.” He added, “We stand with Chief Justice Sereno because just like us, she is also a victim of this tyrant.

We also laud her for being vocal against some of Duterte’s anti-people policies.”