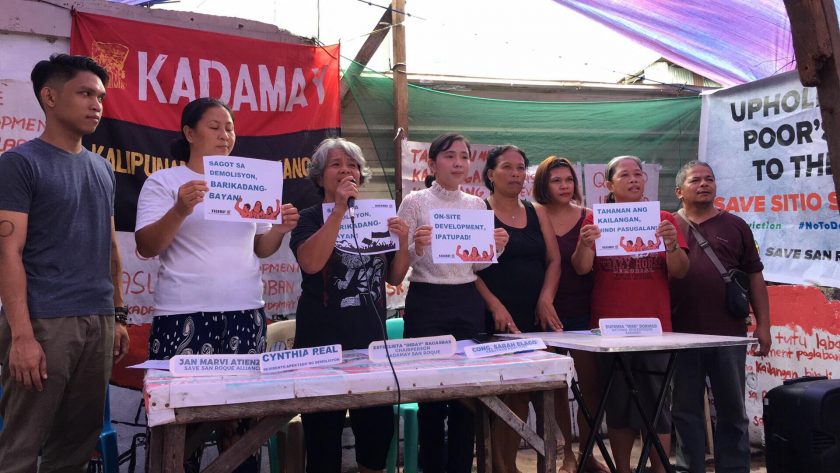 “I learned from the process that ‘wants’ of these urban poor families are what may be considered as ‘basic’ for those who are considered in the middle class.”

Residents have long been struggling against their eviction to give way to the construction of the Quezon City Central Business District, a joint venture between the real estate giant Ayala Land and the Philippine government through the National Housing Authority.

In a press conference this morning, Aug. 6, community leader Estrelieta Bagasbas, said, “They continue to insist on building commercial infrastructure and tourist attractions at the expense of our homes and livelihoods. Who will reside in those condominium units? The rich, of course. The poor, on the other hand, are treated like trash.”

From over 10,000 households, the number of residing families has been reduced by nearly half or roughly 6,000 after a series of pocket demolitions and so-called “road widening” projects. The San Roque community today is surrounded by several high-rise residential towers — all part of the ongoing construction of the business district.

Last week, at least 277 families have received their respective notices of demolition from the NHA, along with a Certificate of Compliance on Demolition secured from the Quezon City Local Housing Board.

Residents were quick to notice that the certificate’s 30-day validity has already expired, having been issued on June 19, under outgoing Quezon City Mayor Herbert Bautista.

Though newly-elected Mayor Joy Belmonte has categorically said there will be no demolition while negotiations are still ongoing, residents continue to prepare the barricade nonetheless.

For 26-year-old architect Jmar Atienza, one of the more than a dozen designers and engineers volunteering in the Save San Roque Alliance, the process of designing an on-site development plan has been very tedious yet participative.

There is currently an ongoing consultation among residents — asking for their dream houses, their wants and needs, and their monthly income and expenses, he told Bulatlat.

“I learned from the process that ‘wants’ of these urban poor families are what may be considered as ‘basic’ for those who are considered in the middle class,” he added.

Among the features of their “dream houses” are: garden, at least two bedrooms, kitchen, balcony, and a sari-sari (variety) store.

The process, he said, is also “radical” as it has never been done by both public and business sectors. No government institution has accomplished anything similar while those in the mainstream real estate industry already has a set of standard designs considered as “saleable,” Atienza added.

Non-government agencies that have attempted to come up with a similar participatory approach, on the other hand, also follow the government’s Community Mortgage Program, as provided in the Urban Development and Housing Act, which progressives consider as anti-poor, he said.

An easier path for those behind the on-site development plan would have been to convince residents to root for a medium-rise residential building, which Atienza found to be the most feasible.

“But it must really go through a process — a process that is open to the community,” he added.

Looking at the towering residential units within the vicinity, will a giant real estate and its own government even consider the people’s proposal?

Atienza said, “we must be able to show them that Sitio San Roque may be considered as an ‘asset’ to the community (rather than an eyesore). We must look for a harmonious way to live together.”