Rappler takes SEC case to the Court of Appeals 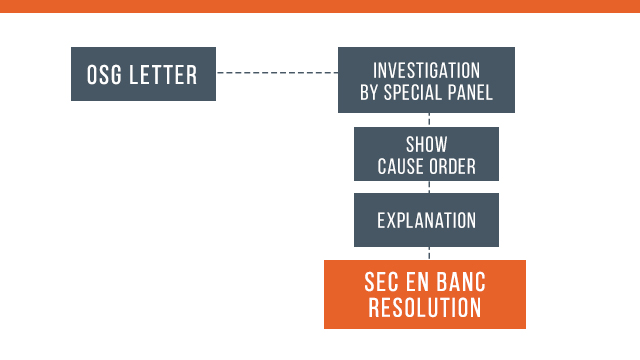 (UPDATED) Rappler’s petition for review cites procedural and substantive processes which were violated, and points out how Rappler’s PDRs were singled out 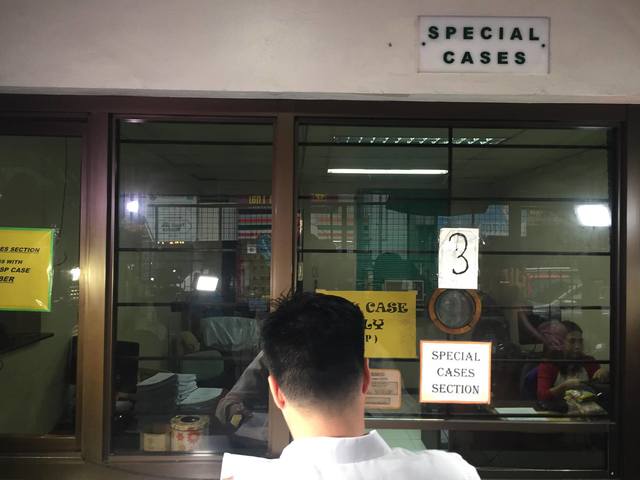 PETITION FOR REVIEW. Rappler’s counsel from the firm ACCRALAW files the petition for review before the Court of Appeals on January 29, 2018. Photo by Lian Buan/Rappler

MANILA, Philippines (UPDATED) – Rappler Inc and Rappler Holdings Corporation filed on Monday, January 29, a petition for review questioning the revocation of their certificates of incorporation before the Court of Appeals (CA).

“We have our own legal position on these issues and the Securities and Exchange Commission (SEC) will most likely take the opposite view. Fortunately, there is jurisprudence that can guide the Court of Appeals in deciding the case. We fervently hope that the case will ultimately be decided for the broader interest of the country,” Lim said.

The 68-page petition argues that contrary to the decision of the SEC, the agreement between Rappler and foreign investor Omidyar Network (ON) does not constitute control.

The petition also bares similar agreements between network giants ABS-CBN and GMA News with its foreign investors, which the SEC has not faulted, and which it did not investigate.

The SEC revoked the certificates of incorporation of both Rappler Inc and Rappler Holdings Corporation (RHC) due to a provision in the Philippine Depositary Receipt (PDR) agreement of RHC with Omidyar.

A PDR is a financial instrument that corporations resort to, to secure foreign investments without violating the nationality restrictions prescribed by the Constitution.

The SEC said that it was unconstitutional for Rappler to commit to Omidyar that it should engage in prior discussion or secure 2/3 of the votes of PDR holders before Rappler can amend its articles of incorporation or by-laws, or take action that would prejudice the rights of ON as a PDR holder.

The questioned provision, or Clause 12.2.2 reads as such:

“The Issuer undertakes to cause the Company from the date hereof and while the ON PDRs are outstanding: not to, without prior good faith discussions with ON PDR Holders and without the approval of PDR Holders holding at least two-thirds (2/3s) of all issued and outstanding PDRs, alter, modify or otherwise change the Company’s Articles of Incorporation or By-laws or take any other action where such alteration, modification, change or action will prejudice the rights in relation to the ON PDRs.”

The SEC said the provision was equivalent to ceding control to a foreign entity, which means Rappler violated the 100% Filipino control rule.

The SEC’s Implementing Rules and Regulations (IRR) define control as something exercised only by the Board of Directors who shall vote, similar to the definition of control under the Corporation Code.

“Clause 12.2.2 of the Omidyar PDR does not grant control over Rappler to Omidyar because it does not make it a stockholder of Rappler or give it the right to vote the Underlying Shares,” the petition said.

Rappler’s lawyers explained that because Omidyar is only a minority investor (another PDR holder North Base Media has more), the questioned provision existed “as a mechanism to help ensure that the rights of a minority investor would be protected vis-à-vis other PDR Holders.”

Rappler’s lawyers said that a close reading of the provision would show that the agreement only kicks in when the amendment is “prejudicial” to Omidyar. It means, the petition said, that Omidyar does not dictate when to amend the by-laws, only that it has to be consulted and it has to agree if the amendment puts them at a disadvantage.

The petition stressed that this has not yet even happened. “Thus, Rappler and RHC cannot be punished in any way for a violation that never occurred,” said the petition.

Rappler’s lawyers cited Article 1158 of the Civil Code in saying that “if an act punishable by law has not been performed, then, the corresponding penalty under the law cannot be applied to one accused of violating it.”

PDRs of GMA and ABS-CBN

The petition also provides the Court of Appeals examples of PDR undertakings of network giants GMA and ABS-CBN, and said they were similar to Rappler’s PDRs. 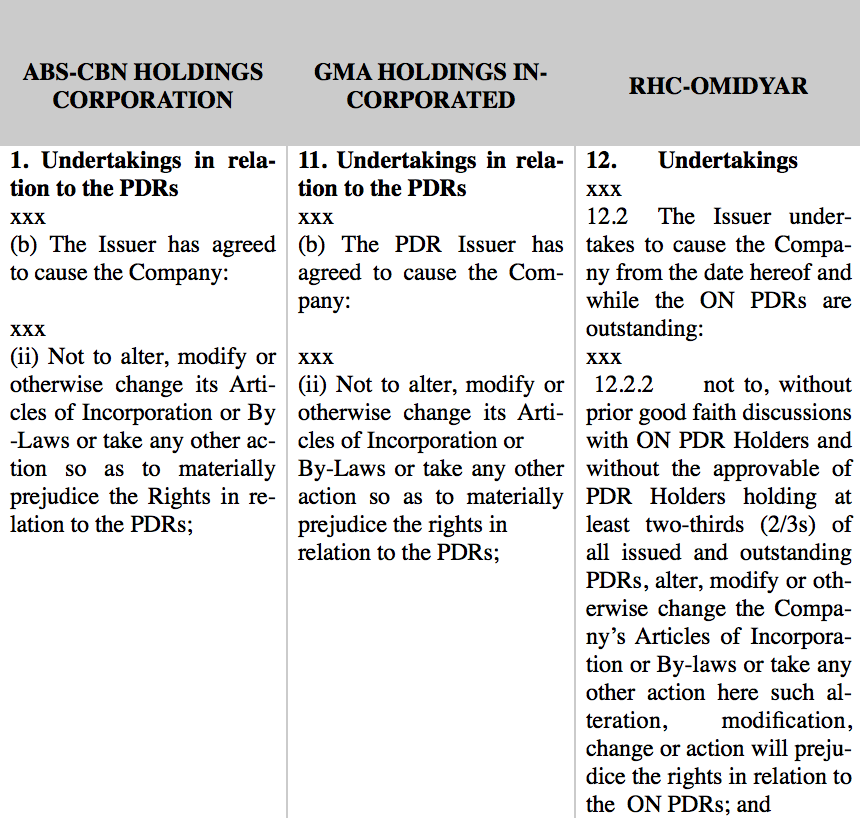 Rappler’s lawyers made the argument that Rappler’s PDR issued to Omidyar requires good faith discussion and a 2/3 vote, while PDRs of the network giants “absolutely obligated the issuers” not to amend their by-laws in a way that will prejudice the rights of the PDR holders.

“There should be no reason for the SEC En Banc to find fault in Clause 12.2.2 of the OMIDYAR PDR, which does not even absolutely prohibit the amendment of the Articles of Incorporation and By-Laws of Rappler,” the petition said.

SEC Chairperson Teresita Herbosa said there’s no need to review the PDRs of the network giants, after their decision on Rappler, saying they were different cases.

In the petition, counsels explained that Rappler did not need to register their PDRs with the SEC because the Securities Regulation Code (SRC) did not require registration for sales of securities to less than 20 persons. (Rappler sold only 3 PDRs.)

“Nevertheless, RHC notified the SEC of the existence of the PDRs it had issued not only through SEC Form 10-1 but also through the submission of its Consolidated Financial Statements for 2015 and 2016, which the SEC En Banc (adopting the findings of the Special Panel in toto) took note of,” the petition said.

It added: “Clearly, there was no intention whatsoever to conceal the Omidyar PDR from the SEC.”

Rappler also claimed that due process was not followed, citing the SEC’s own rules. In the graphic below, the lawyers explained how the SEC cut short the process for Rappler, depriving it of the rightful opportunities to defend itself.

This is the standard procedure as per SEC rules, according to the petition: 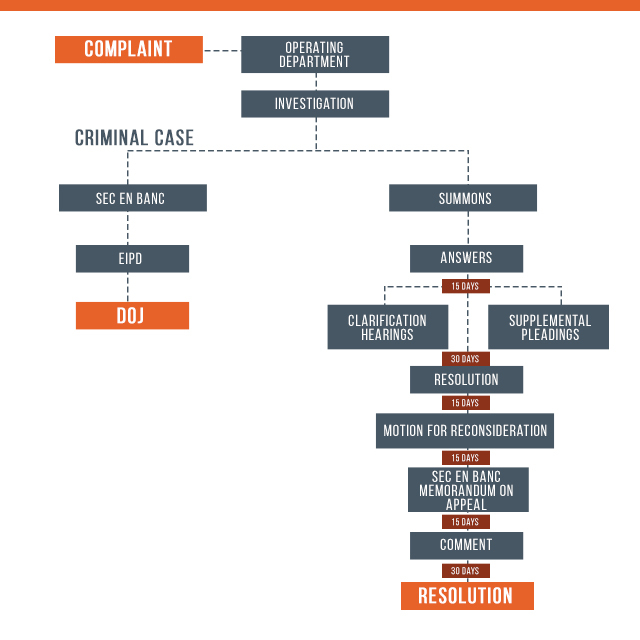 STANDARD PROCEDURE. Standard Procedure for an administrative action under SEC rules, according to Rappler’s petition for review.

And this was the procedure applied to Rappler, also according to the petition: 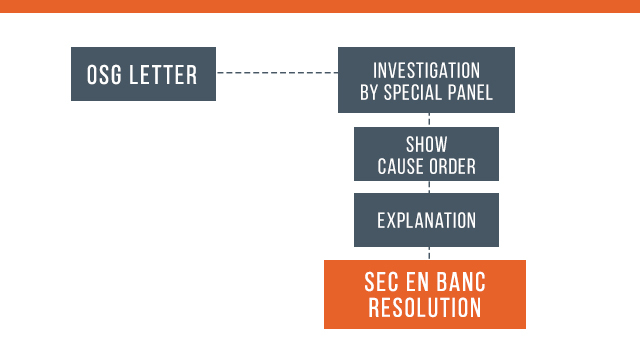 SHORTCUT? The procedure applied to Rappler in the investigation of the SEC, according to Rappler’s petition for review.

Moreover, the petition also said that the SEC had prejudged Rappler from the time it issued a show cause order against it.

A special panel was created in July 2017 to conduct an “in depth-examination of Rappler” and after a month, on August 2, Rappler was served a show cause order to explain why it should not be held liable for violation of the Constitution.

“The Special Panel did not have the power, authority or jurisdiction to adjudge Rappler and/or RHC administratively liable and to impose administrative sanctions….(but the show cause order) had already made a finding that RAPPLER and RHC were liable under the various laws cited in that order,” the petition said.

It added: “Rappler and RHC, being respondents in this case, were already found to have violated the law and the Special Panel shifted the burden of proof on them to explain why they are not liable. This is in contravention of the established rule the burden of proof is on the complainant.”

The petition also pointed out that on December 11, 2017, Omidyar waived its rights under the questioned provision. But the SEC did not consider it because only a photocopy was submitted, and therefore not counted as notarized.

The petition also cited the PLDT case, wherein the Supreme Court allowed the corporation to “cure” the deficiencies of their structure. The petition maintained that the revocation of the certificates of incorporation was a “harsh penalty” that would have a disastrous impact on businesses, and would discourage foreign investors.

And even if the PDR clause were assumed to be unconstitutional, the petition said that there is no law that “grants the SEC the power to revoke the certificate of incorporation of a company for the reason that a clause found in a contract it had entered into is void for being unconstitutional.”

“To argue otherwise would expose countless corporations to possible revocation of their certificates of incorporation if any of their contracts happen to contain a void provision,” the petition said. (READ: FAQs: Rappler SEC case)

Rappler also pointed out that it cannot be held accountable for a law applicable to mass media when it should not be classified as only mass media.

The petition pointed out that both Section 11 (1) of Article XVI of the Constitution and Presidential Decree No. 1018 said that “mass media” only pertains to print and broadcast media. Rappler is fully internet-based. (READ: EXPLAINER: How SEC’s Rappler decision is a test case for press freedom)

Nevertheless, the petition said that the “serious procedural and substantive irregularities in the decision” lead to no other conclusion that “its real purpose is to silence Rappler and muzzle free expression.”

It notes the sequence of events of Solicitor General Jose Calida initiating the probe, and the accusations against Rappler by President Rodrigo Duterte in no less than his State of the Nation Address, as a pattern that would prove that its “closure” on corporate grounds has always been about the government’s intent to stop Rappler from publishing.

After the SEC decision, Rappler is now the subject of two separate criminal investigations by the National Bureau of Investigation (NBI): the first for possible violation of the Anti-Dummy Law and “other laws”, and the second for cyber libel over an article published before the Cybercrime Law was enacted.

“Rappler is being made to pay the ultimate price for exercising the freedom of the press,” said the petition. – Rappler.com