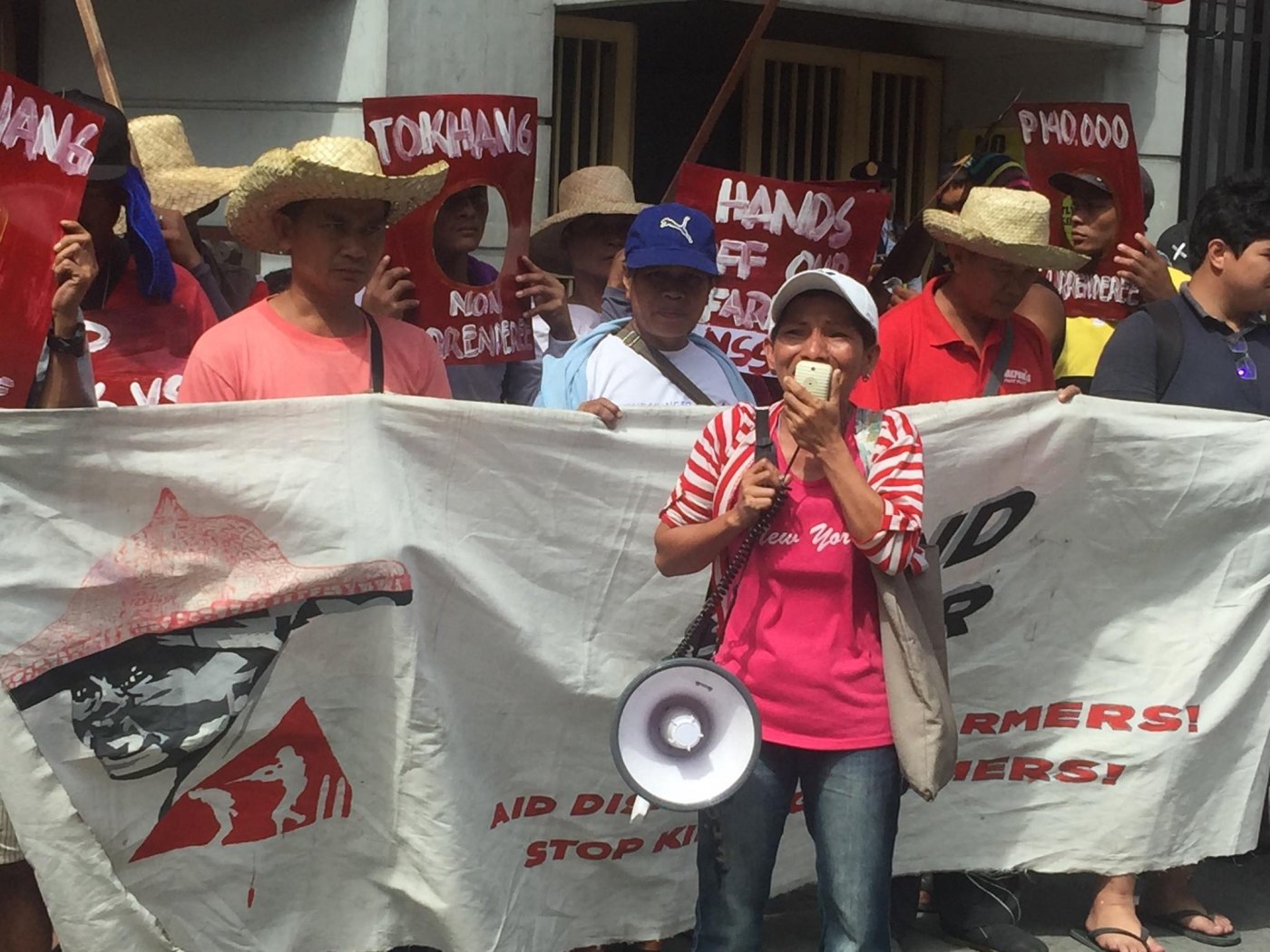 Members of Samahan han Gudti nga Parag-uma—Sinirangan Bisayas (SAGUPA-SB), Bayan Eastern Visayas, Northern Samar Small Farmers Association (NSSFA) and People Surge stormed the head office of the Department of Interior and Local Government in Quezon City today to slam the agency’s Comprehensive Local Integration Program (CLIP) which seeks to provide monetary compensation to members of the New People’s Army (NPA) who will submit to the folds of the government.

The groups exposed that under CLIP, a sum of P140,000 were being collected by the Armed Forces of the Philippines (AFP) and other State forces for every rebel returnee that they can present.

The 50-farmer delegation displayed mock “WANTED: FAKE NPA SURRENDEREE” posters with their faces shown on it that also included monetary amounts indicating how much money is on top of their heads.

Protesters also aired suspicions that the military are falsely accusing farmers as members of the NPA and luring them to sign blank documents. According to them, “CLIP is being used as a milking a cow of military officials and a huge source of corruption and a bogus reintegration program.”

“Voluntary surrender under CLIP is fake news. We, innocent farmers, are either forced to surrender, bribed with Php140,000, or lured into signing blank documents. CLIP is nothing but a huge chunk of fund used to harass farmers for propaganda posturing, a huge source of corruption, a fascist reintegration program,” said Jun Berino of SAGUPA-SB.

During the rally, Maricris Rosco of the NSSFA recounted her actual experience and encounter with the military in their barrio in Barangay San Francisco in Las Navas town, Northern Samar where each household was asked by the military to get bamboo stalks for the camp they are building close to their barrio.

They were also asked to write their names and signatures in a sheet of paper only for them to find out that the back page indicates that it was a surrenderree form.

Meanwhile, Mila Quimbo, also a member of the NSSFA was threatened by officials from the 20th Infantry Battalion when she declined the P140,000 bribe for her to sign forms indicating that she was a surrenderee of the New People’s Army.

“I can still vividly recall when they said that if I will be consistent in refusing to do as they say, I will be next on the hit list since Tokhang will be their new tool against us farmers,” Quimbo narrated.

In Palapag, Northern Samar, three farmers named Teny Gerbon, Richard Avino and Arnel Aquino were abducted by elements of the 20th Infantry Batallion last November 24, 2017 while they were attending to their farms. The groups said that the 20th IB declared them as NPA surrenderees to justify their detention.

“My 20-year old son did not voluntarily surrender. He was taken by elements of the AFP and was asked to sign sheets of paper. We visited him and he has been interrogated inside the camp,” Jocelyn Aquino, mother of one of the detained farmers said.

Berino said that CLIP should be junked as it is used as a tool for harassment, interrogation and other human rights violations against innocent farmers by falsely charging them as members of the NPA. He stressed-out, “CLIP is a concrete example how AFP works in cahoots with civilian government in the pursuit of ending insurgency.”

“But that poses a problem-solution mismatch. If the Duterte government truly intends to end the decades-long insurgency, it should resume talks with the National Democratic Front of the Philippines (NDFP) and resolve the root causes of the armed conflict,” Berino said.

The groups also called for the realignment of CLIP budget to basic social services and be given as Emergency Production Assistance to farmers who have been struck with calamities and widespread infestation such as the farmers in Eastern Visayas.