Review of ‘Aswang’ | The worst monsters prey on the poor 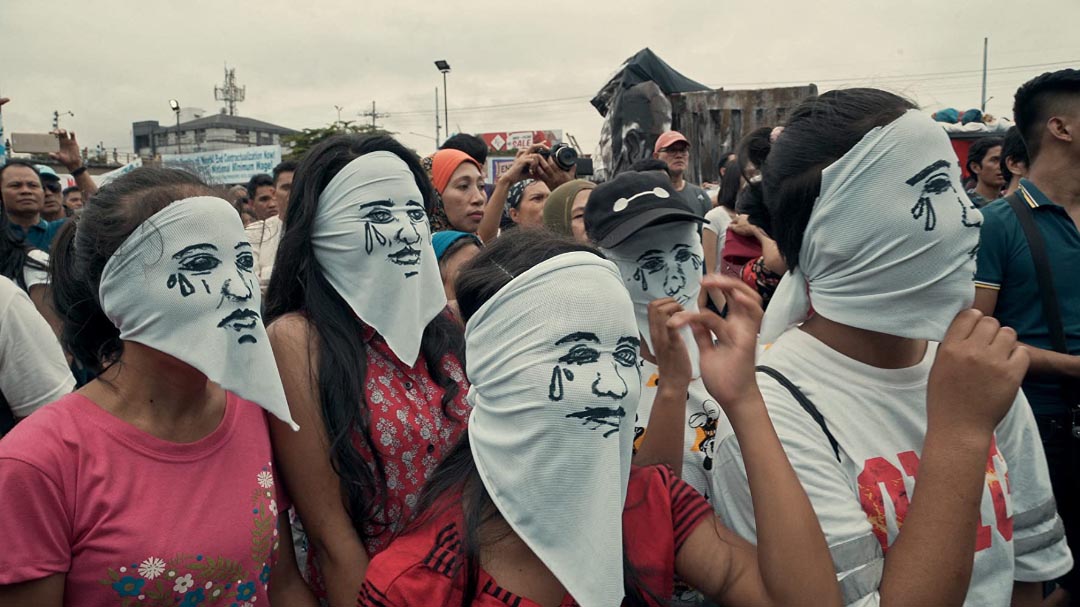 “Whenever they say an Aswang is around, what they really want to say is– be afraid.”

‘Aswang’, the much-awaited award-winning documentary by Alyx Ayn Arumpac is an intimate illustration of how Duterte’s bloody “drug war” continues to haunt the children and families who were left behind.

Chronicling the first two years of President Rodrigo Duterte’s ‘legacy’ Oplan Tokhang, this film has portrayed one of the darkest times in recent Philippine history through the points-of-view of a child, of a photojournalist following the trail of blood, and of people in the margins whose lives have changed forever. Needless to say, the narratives shown in the film have once again reminded us of the grim reality we live in. It speaks to us – reminding us that we should not be numbed by the number of the “drug war” casualties, we should be disturbed.

Tok-hang, a term which originated from the local words tok (‘knock’) and plead (‘hangyo’), describes the massive police operations that were launched by the Duterte administration since July 2016. It involved police officers going door-to-door to hunt for drug users and other related offenders. Contrary to Philippine National Police data of about 6,000 casualties, local human rights groups have recorded about 30,000 casualties of the brutal campaign. These include thousands more whom unidentified gunmen killed in cases that the police did not seriously investigate. And even cases that did not make it in the news like that of Kian delos Santos.

Kian, in the eyes of a dear friend

One of the most moving parts of the film is that about Kian. The helpless 17-year old boy accused of being a drug-runner, gunned down by policemen, and eventually was found dead in a narrow alley in his own neighborhood in Caloocan on the evening of August 16, 2017. Even with the guilty verdict on the three policemen who were proven responsible for his death, the grave feeling of loss and grief continue to haunt all the people he had left behind.

Jomari, a young child of about six or seven years old was one of Kian’s closest friends. With that very young age, he seemed to have witnessed far worse situations of violence and police brutality than any other ordinary child. In the film, he has effortlessly revealed the harsh truths faced by children in the slums – how they have become convenient targets of the police narrative of ‘nanlaban’ (fought back), or how they could be easily treated as ‘collateral damage’ during buy-bust operations in poor communities.

Jomari directly answered so many questions about his dear friend Kian. By how he described Kian, who was almost a brother to him, he has easily proven that his friend was a victim and not a criminal. Jomari knew how it felt having to bear the brunt of the government’s targeted war against the poor. His mother was also convicted of a drug-related crime, and it was excruciating to witness how, as a young child, he was pushed to accept a reality that he didn’t deserve. He was poker-faced as he spoke about the possibility that his mother could have the same fate as his friend, Kian.

In their community, all his playmates and fellow children of poor families have long accepted that fate. They have become too comfortable with that danger that they would even make jokes about it. That was one of the most painful scenes in the film. The children have been the primary witnesses to the tokhang-related crimes committed by the police, and they have also been the first ones to grieve the deaths of their family members and friends.

“What good are the many eyes when they only look at the victims on the ground?”

Even the act of grieving has been unapologetic to the families of Oplan Tokhang victims. Particular scenes in the film have shown how sudden deaths and wakes have become a routine in urban poor communities. The drug war has created one abandoned family after another, struggling to let loose the feeling of grief and anger over the loss of their loved ones.

“This government has always targeted the ‘drug users’, but never the ‘drug lords,” said Brother Ciriarco Santiago III, a photojournalist who committed most of his time documenting the victims of Oplan Tokhang.

While the number of drug-related killings have continued to increase since Duterte’s term in 2016, the Department of Justice in 2018 has cleared alleged drug lords Kerwin Espinosa, Peter Lim, and 20 others of narcotics-related charges due to ‘lack of evidence’.

This took place even after the discovery of a secret jail in Manila in 2017 which held about 30 drug suspects, most of whom were poor. In an anonymous interview, one of the detained drug suspects in that jail described the dehumanizing conditions they went through. They were held in a small, dark alley hidden behind a bookshelf in Raxabago Police Station in Tondo, Manila. They were electrocuted, tortured, and they slept in the same spot where they urinated.

Without records of arrest and inquest proceedings, they were held there for a week and were told that in order to be released, they must pay at least P 100,000-ransom. Upon investigation and extensive media exposure, they have proven that it was indeed a hidden jail. However, what happened next was even more heartbreaking – their arrests were made legal, they were still put behind bars.

Go not gently into that good night

For a power-hungry tyrant and his brutal pawns, the war against the poor is the name of the game. Aswang tells us that the thousands victims of Oplan Tokhang are not mere by-products of today’s nostalgia. As we are faced with another wave of state-sponsored threats in the form of the newly-enacted Anti-Terror Law, we are haunted by the souls of the thousands deprived of justice.

The unfortunate death of Kian and many others tell us that the Oplan Tokhang is real and its masterminds are very much alive today. These monsters have created a nation of orphaned children and killed their dreams. These are the same blood-thirsty monsters who creep into the night, whose only real weapons are inflicting fear and terror.

The film’s greatest strength is the up-close narratives from people who were left behind, which leave us with an unsettling feeling. It tells the viewers that grieving and being afraid will not slay the monsters. We need to fight them.

“But some refuse to be afraid. They choose to stand up and look the monster in the eye. Here is where it begins.”

The post Review of ‘Aswang’ | The worst monsters prey on the poor appeared first on Bulatlat.