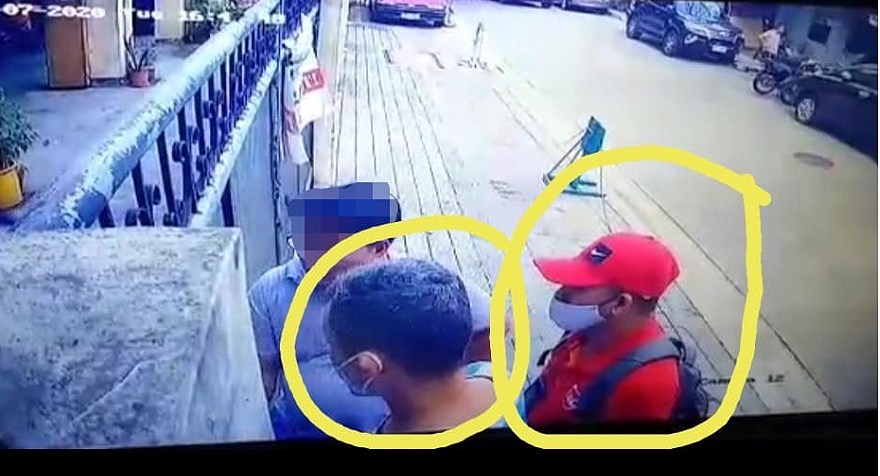 “I was served a warrant of arrest this afternoon by a guy who introduced himself as an LBC courier. He was wearing the uniform/t-shirt and had an ID. Is this the usual procedure now?”

By RAYMUND B. VILLANUEVA
Kodao Productions

Police Master Sergeant (SPOI) Joelon de Tomas Rafael was dressed as an LBC courier when he arrived at Karapatan’s office in Quezon City and introduced himself as an employee of the company.

“I was served a warrant of arrest this afternoon by a guy who introduced himself as an LBC courier. He was wearing the uniform/t-shirt and had an ID. Is this the usual procedure now?” Palabay wrote in a Facebook post.

Palabay added that another man in civilian clothes accompanying Rafael introduced himself as a police officer from the Quezon City Police District’s headquarters in nearby Camp Karingal.

“I asked for their IDs. The guy in plainclothes easily gave his and said, after I badgered the ‘LBC guy’ for his ID, that the LBC guy is also a cop,” Palabay revealed.

The prominent human rights activist said she reminded the two police officers that the manner they were serving the arrest warrant violated the PNP’s manual on such operations.

“[W]hen you’re serving warrants of arrests, you should introduce yourself as policemen/arresting officers. You should be in uniform. In fact, you should have read to me my Miranda rights,” Palabay told Ubias and Rafael.

Rafael also initially lied when asked for his identification, saying he left it in the car. He eventually took it from his back pocket when pressed, Palabay said.

The officers tried to justify their ruse by saying they would not be able to arrest respondents if they stick to legal procedures, she added.

Ubias and Rafael apologized and left after their identification cards and documents were photocopied, Palabay said.

Palabay said the arrest warrant stemmed from a perjury case filed by national security adviser Hermogenes Esperon Jr. in retaliation for the writ of amparo and habeas data petition Karapatan, the Rural Missionaries of the Philippines and Gabriela filed with the Supreme Court in May 2019.

Esperon was among the respondents named in the petition of having threatened and red-baited officers and members of the three organizations.

Palabay said the perjury case was initially dismissed by a Quezon City prosecutor, and then revived and filed in court by another prosecutor, after Esperon’s motion for reconsideration.

Palabay said she showed Ubias and Rafael the recall order for the arrest warrant against her.

The policemen said they only received the arrest warrant yesterday and they haven’t received the recall order issued on April 29, 2020.

Palabay has posted bail and presented herself to an executive judge via online channels to secure the recall of the arrest warrant against her.

In a Facebook post, Karapatan lawyer Ma. Sol Taule asked if the courier company knows its identity is being used by the PNP for undercover operations.

“At ano naman kaya ang susunod niyong costume? Grab, Food Panda, Lalamove Delivery?” she asked, referring to other courier service companies in the country. (What costume would you be using next?)

Taule also asked the police if donning LBC uniforms is part of Rule 6.1 of the PNP’s operations manual.

The manual orders that arrest, search and seizure, checkpoint, roadblocks, demolition and civil disturbance management operations shall be conducted with a marked police vehicle, led by a Police Commissioned Officer (PCO), and with personnel in prescribed police uniform or attire.

Ubias and Rafael are both non-commissioned officers. Reposted by