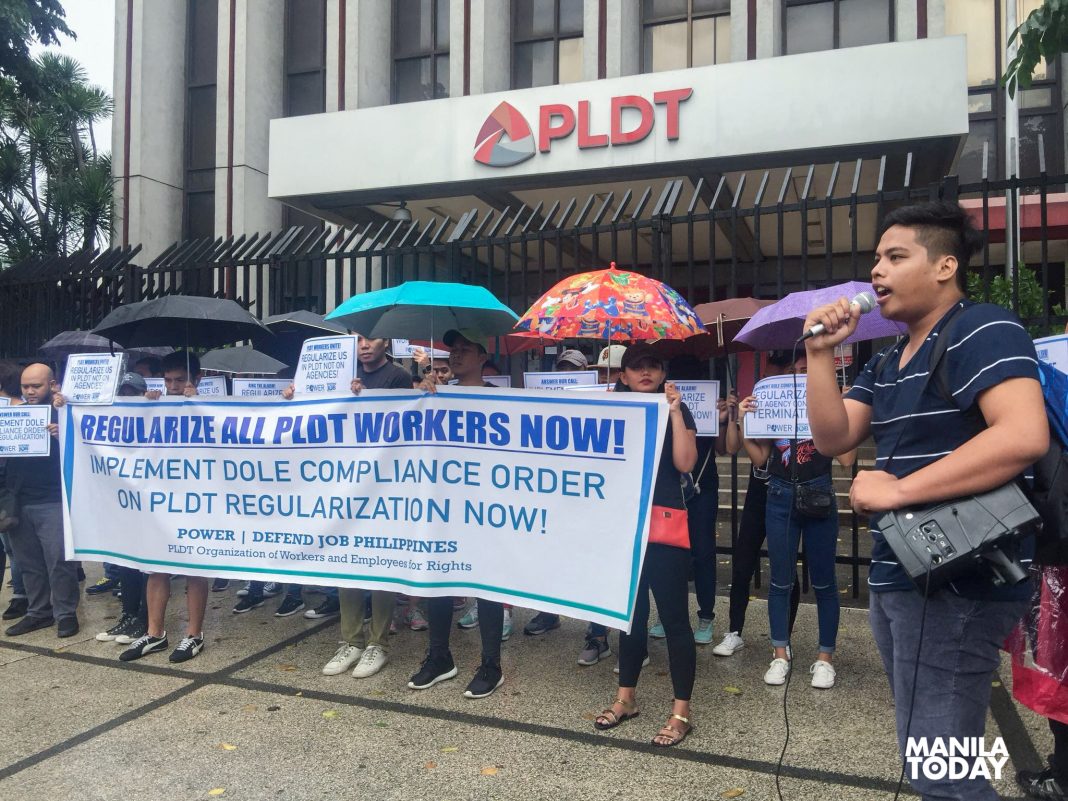 Customer service representatives and technical support workers of Philippine Long Distance Telephone Company (PLDT) today held a ‘Kalampagan’ protest in front of the company’s office on España Boulevard in Manila after the telecommunication giant terminated its service contracts with different manpower agencies across the country on June 30. The move placed thousands of workers in ‘floating’ status. 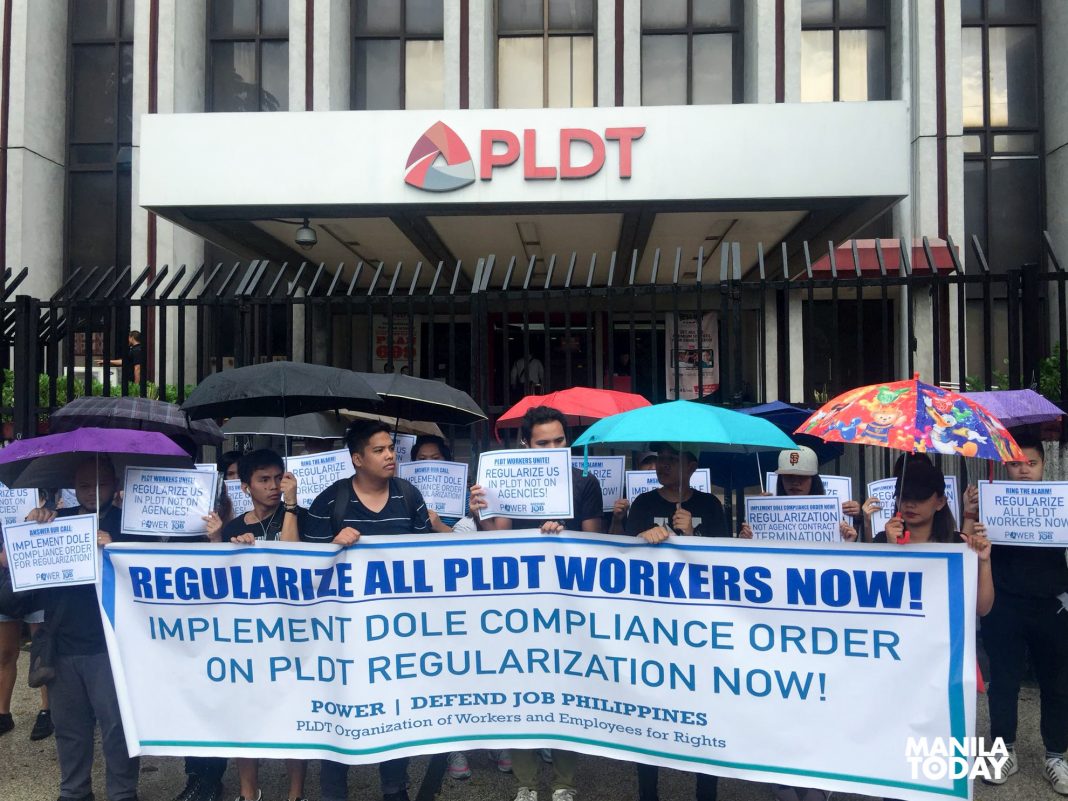 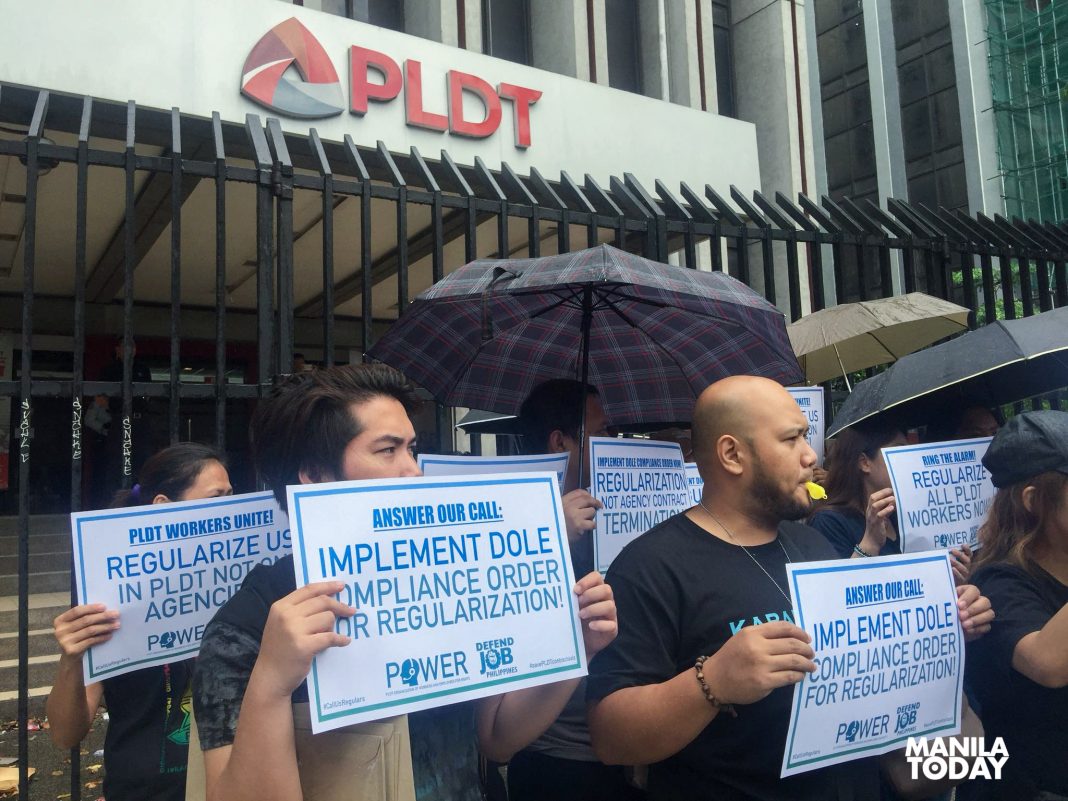 Led by the PLDT Organization of Workers and Employees for Rights (POWER) and Defend Job Philippines, protesters mostly coming from outsourcing agency SPi CRM Global urged the PLDT management to implement the regularization compliance order issued by the Department of Labor and Employment (DOLE).

POWER and Defend Job Philippines slammed the said termination of agency contracts and saw this as move of the PLDT to circumvent the said compliance order on regularization.

“We are deeply enraged over what PLDT did to our jobs. PLDT’s decision to junk the agencies is clear proof that it is avoiding the DOLE’s ruling to regularize us. PLDT is our principal employer,” said Dan Joshua Nazario, POWER president.

Nazario added that as PLDT has been “desperately trying to resort to all possible means to circumvent the DOLE rulings.” In response, the group said they will be intensifying their protests to pressure the company into granting them regular status in the soonest possible time.

Cycle of orders and appeals

POWER and Defend Job Philippines explained that DOLE came up with a new decision on April 2018 which upheld its January 10 ruling and in effect denied PLDT’s reversal appeal of its earlier decision and reiterated its prior order to grant regular status to its nearly 8,000 contractual workers.

As in DOLE’s earlier decision over PLDT, Bello said that it found no merits to the appeal of PLDT and 35 of its contractors. In response, PLDT elevated its contractual case to the Court of Appeals (CA) through a petition for certiorari on May 2018.

As of press time, according to the groups, PLDT’s appeal is still pending and is awaiting the CA decision.

DOLE recently included PLDT among the top three companies suspected to be engaged in labor-only contracting.

After the ‘Kalampagan sa PLDT España’, protesting workers trooped to the DOLE Main Office in Intramuros, Manila to seek dialogue with DOLE officials. The groups aired their complaints to the DOLE regarding their disputes with the PLDT management. Dressed in black shirts, members of POWER and Defend Job Philippines also challenged DOLE Secretary Silvestre Bello III to intervene on their issue and push PLDT to implement DOLE’s regularization order.

“We have high hopes that the Labor Department and President Rodrigo Duterte will answer our calls in the soonest possible time. We hope that they will be true to their words until all of PLDT workers will enjoy the benefits of being regular employees,” said Nazario.

In a dialogue with Bello and DOLE Usec Joel Maglungsod, Maglunsod stood firm on their compliance order and assured that PLDT workers must be regularized by PLDT.

Labor officials vowed to call for a mandatory conference between DOLE, SPi, PLDT and POWER in the coming days to discuss the issue of regularization of PLDT workers and implementation of its compliance order.