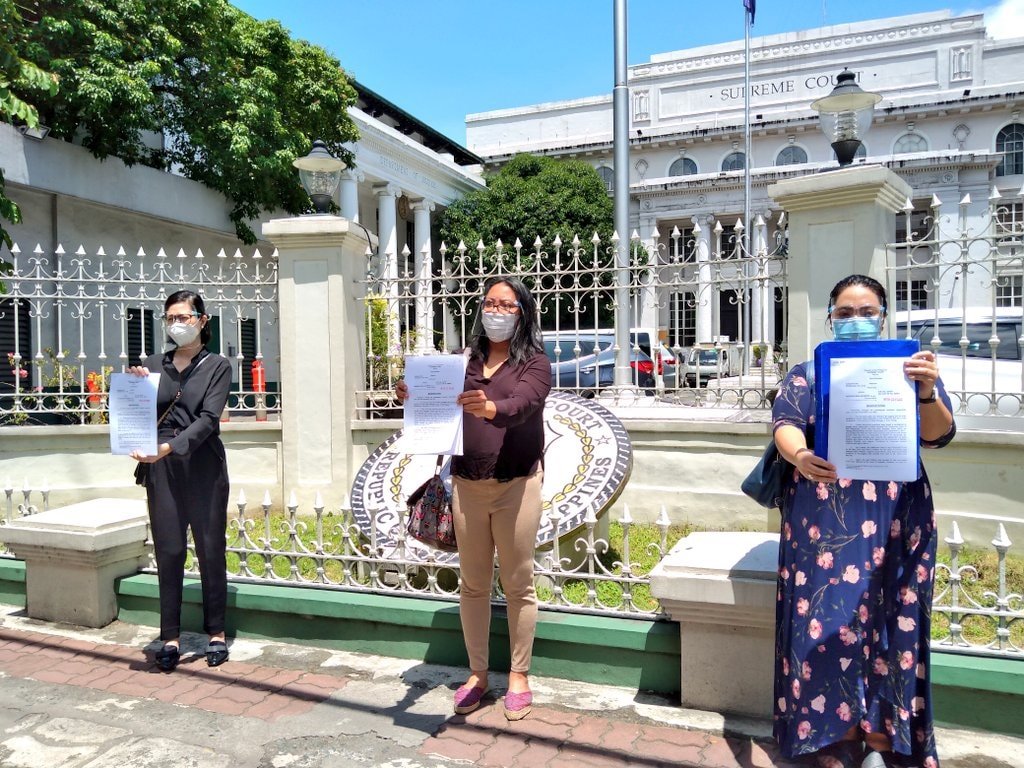 Just days before and after the murder of Alvarez, several members of Karapatan are receiving death threats, warning that they are next if they do not stop human rights work.

MANILA – Human rights group Karapatan once again appealed to the Supreme Court (SC) to grant its petition for review of its plea for protection amid state-perpetrated harassment.

Assisted by their counsels from the National Union of Peoples’ Lawyers (NUPL), the group made its appeal as it filed their manifestation, Sept. 1, on the assassination of human rights and health worker, Zara Alvarez. She was supposed to stand as a witness in Karapatan’s petition for writ of amparo and writ of habeas data amid the continuing attacks on human rights workers.

In the manifestation, the group stated that “[f]or the past years, the rampant red-tagging and terrorist-labelling of human rights defenders in the Philippines has led to their harassment, incarceration on false charges or even killings.”

Alvarez was gunned down by an unidentified assailant in Bacolod City, Negros Occidental on Aug. 17 following years of threats, imprisonment, and harassment from State forces, the group said.

The petition for writs of amparo and habeas data was filed by Karapatan on May 6, 2019. It was granted by the High Court and was referred to the Court of Appeals. On June 18, 2019, the 14th Division of the appellate court submitted the case for decision without allowing the witnesses to present evidence. After 10 days, the CA dismissed the petition.

“We call on the Supreme Court to annul the decision of the Court of Appeals and grant our amparo and habeas data petition now. We cannot let this murderous crackdown continue!” she added.

Red-tagged and then killed

In 2008, Alvarez was declared as persona non grata in barangay Linantuyan, Guihulngan City. Karapatan said the resolution was instigated by the 11th Infantry Battalion of the Philippine Army to prevent her and Karapatan-Negros from documenting human rights abuses. Zara and other rights defenders in the island were also tagged as “fronts” of the New People’s Army.

Alvarez also received deaths prior to her arrest on Oct. 30, 2012. According to the affidavit she signed in June last year, she had been receiving calls from unknown numbers telling her to be careful and that she was being watched. A week later, she was arrested and detained for nine months. The case against her was eventually dismissed due to lack of evidence.

Alvarez was also included in the list of the 600 individuals in the Department of Justice’s petition for proscription filed before the Manila Regional Trial Court in 2018. Her and many others’ names were later removed but the red-tagging against her continued.

She, along with Escalante City Councilor Bernardino “Toto” Patigas’s and several others were listed in a tarpaulin at the police station and public market in Negros as “CNN (Communist Party of the Philippines-New People’s Army-National Democratic Front of the Philippines) personalities.”

Patigas was killed in April 2019. Other red-tagged lawyers, Benjamin Ramos and Anthony Trinidad were also gunned down. https://www.bulatlat.com/2019/07/26/lawyer-included-in-hit-list-killed/

A few days after the Court of Appeals dismissed the petition of Karapatan on June 28, 2019, the group received a message warning that “Alvarez would be next and all of the NUPL.”

Alvarez expressed fear for her life as well as her colleagues’ in the said affidavit because it was not only her that was being red-tagged but the entire organization.

“This makes us open targets of illegal arrests and trumped-up charges. I have also experienced being detained for crimes I did not commit and I fear that it may happen again or I might be killed like what happened to the many farmers of Negros as well as Tatay Toto and Atty. Ben Ramos,” Alvarez said in her affidavit.

On Aug. 17, Zara was gunned down by unknown assailants. https://www.bulatlat.com/2020/08/17/activist-gunned-down-in-bacolod/

Alvarez is the 13th human rights worker from Karapatan to be killed under President Duterte’s administration. She was also the second intended witness in the petition for the writs of amparo and habeas data who was killed following Ryan Hubilla, who was also gunned down on June 15, 2019, mere days before the initial hearing of the petition before the Court of Appeals.

Palabay said that just days before and after the murder of Alvarez, several members of Karapatan are receiving death threats, warning that they are next if they do not stop human rights work.

“The goal is to terrorize and silence us,” Palabay said.

This was followed by a liquidation list sent via text message to Karapatan-Southern Tagalog and the NUPL on August 22. The said list included Alvarez, Singson, and eight other activists in Negros.

Karapatan members in other regions also reported various forms of threats and harassment.

Mar Xavier Ampongan of Karapatan-Camarines Sur and other progressive leaders was also tagged as members of the CPP by the 9th Infantry Division of the Philippine Army on Aug. 23.

On Aug. 30, Karapatan-Batangas Secretary General Ruperta Enriquez and her son received from an unidentified man pretending to deliver a package from Shoppee a written note with cash worth P250 as well as two numbers, the name of a certain “Jerome,” and three “options,” with a warning that, if she does not “cooperate,” her name will be included in a “terror list” and “alam mo na ang mangyayari sa’yo” (“you know what will happen to you”).

Palabay added that the National Task Force to End Local Communist Armed Conflict also tagged Karapatan as a legal front and accused Alvarez and Randall Echanis as members of the New People’s Army.

Karapatan has documented at least 328 killings from July 1, 2016 until Aug. 17 this year, in line with the government’s counterinsurgency program. This includes the 185 human rights defenders and activists killed pursuing their advocacies.

Seven of Karapatan’s national officers are also facing perjury charges which the group see as retaliatory actions for its writ of amparo petition and engagement with the United Nations Human Rights Council. Online attacks, including cyber attacks on its website, were also documented against its human rights workers.

Palabay said they condemn the unabated threats against their colleagues.

She said these threats against human rights defenders are escalating into more terrifying forms and have already killed many of their colleagues.

“We will not take these threats sitting down. We are also calling the attention of the Commission on Human Rights, human rights lawyers and advocates, the United Nations human rights mechanisms, and the international community on these threats under this worsening climate of impunity in the Philippines,” Palabay said.