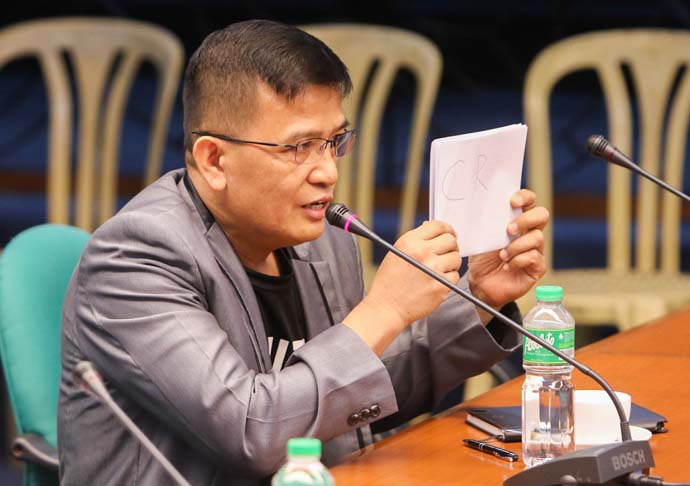 The Senate has moved for the transfer of Office of Civil Defense (OCD) deputy administrator Nicanor Faeldon to the Pasay City Jail due to his continued contempt citation.

Former BOC commisioner Nicanor Faeldon shows a sign asking permission to go to the bathroom after having a heated argument with Sen. Gordon during the Senate hearing on the 6.4-B shabu shipment from China today. (Photo by Jansen Romero)

Senator Richard Gordon, Blue Ribbon committee chairman, said the Senate has agreed to submit Faeldon under the custody of the Pasay City Jail, following the resumption of the probe on alleged corruption at the Bureau of Customs (BOC) today.

“I just want to make it formal that the Senate unanimously declared that Mr. Faeldon, formerly of Customs, would remain to be charged with contempt and he will now be remanded to the custody of the Pasay City Jail upon order of commitment by the Senarte President,’ Gordon said in his manifestation during today’s afternoon session.

Faeldon may be transferred to the city jail anytime within the day, information reaching Senate reporters said.

Faeldon has been detained in the Senate compound since September last year after he was cited for contempt for repeatedly refusing to attend the Senate inquiry.

Meanwhile, Gordon said Faeldon should “see a psychiatrist” for his demeanor in the Senate.

He made the proposal as he slammed Faeldon for being “arrogant” and deliberately evading the Senate blue ribbon committee’s probe into the alleged ‘tara’ system at the Bureau of Customs (BOC), which resulted in the release of the P6.4-billion illegal drugs from China.

The Blue Ribbon panel chair said Faeldon is being “selective in his respect, citing the latter’s reason for attending the hearing. At the start of the hearing, Faeldon, lashing out at Gordon, said he showed up because is “now a government employee, not because I expect that you will lead this committee to find out the truth.”

Gordon, concluding Faeldon’s attitude after the hearing, said, “He lives in his own world. I think he should see a psychiatrist, and I really mean that.”

With such an attitude despite the controversy he had figured in, the senator said he “agrees” that President Duterte may have “made a mistake” in appointing Faeldon to the OCD.

“I don’t think the President has any business appointing this guy. How many times should we forgive those who plot a coup against the government…those erring officials who escape when they get caught,” he said.

Gordon said he “strongly suggests” that the President appoint someone more competitive especially that Faeldon faces possibility of longer detention.

The senator lamented the Department of Justice’s dismissal of the case filed against Faeldon and other BOC officials linked to the smuggling of 604 kilos of ‘’shabu’’ (crystal meth) seized in May, while the Senate has yet to conclude its investigation on the issue.

He said this may have boosted the confidence of Faeldon to “disrespect” the Senate.