“More and more Filipino families will be pushed into deeper poverty under the COVID-19 lockdown if government does not speed up and significantly expand socioeconomic relief and response to reach all those needing assistance.”

MANILA – It has been a month since Luzon was placed under enhanced community quarantine (ECQ), and life has been difficult for Reina Sibulo, 37, a mother of two from Muntinlupa City.

Sibulo’s income from her online business has been limited since the lockdown. What makes it even tougher for her is that her husband, who is working in the Middle East, has not been able to send money for almost two months now because of the lockdown.

Even as her in-laws help them in their food needs and they receive relief packs from the local government, it’s still a challenge to make ends meet.

“It’s difficult since I can’t do meet ups as often as before. Delivery of goods is being hampered in checkpoints. So we are really saving, such as stretching our lunch to dinner,” she said in an online interview with Bulatlat.

The emergency subsidy or the social amelioration package (SAP) of the government could somehow help Sibulo but the form which was given to her has no code bar and only a photocopy. According to guidelines issued by the Department of Social Welfare and Development (DSWD), photocopied forms are not valid.

Under the Bayanihan to Heal as One Act, at least P200 billion shall be allocated for subsidy of 18 million low-income households affected by the ECQ. They will receive an emergency subsidy amounting to P5,000 to P8,000 each for two months.

Sibulo, whose livelihood has been affected because of the ECQ, should have been eligible but since she was not given a valid forms, she would not be getting the much-needed SAP. 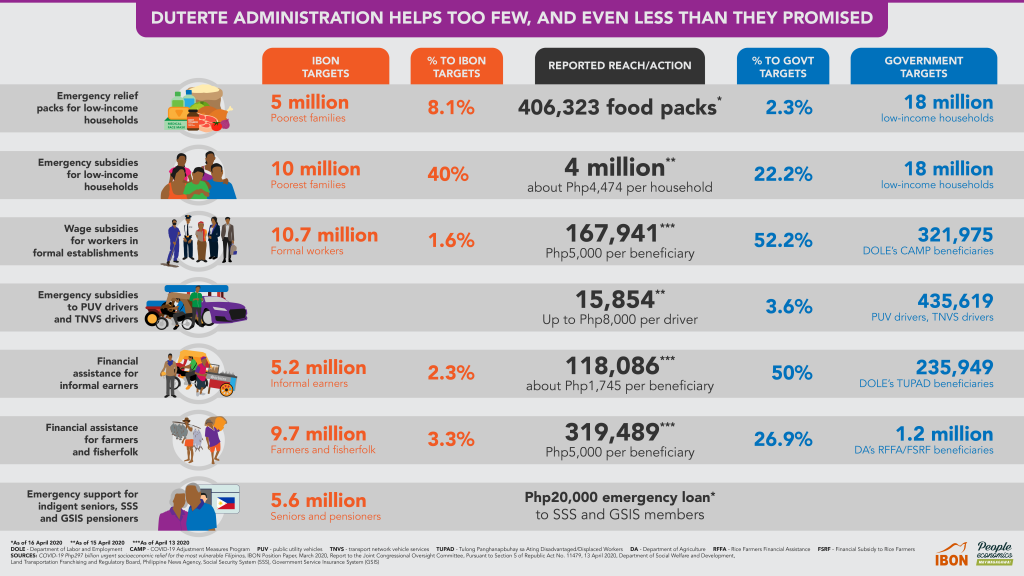 Contrary to House Speaker Alan Peter Cayetano’s pronouncement, not everyone would receive aid. For every municipality, the DSWD only allotted a definite number of families, or what local officials referred to as the quota system.

In Muntinlupa, only 58,836 households will receive SAP, or just 59 percent of the total households in the city.

This explains why some families, even if affected by the quarantine did not receive social amelioration cards or forms.

Many local government units complained of the said quota system.

In Angono, Rizal, only 39 percent of the 30,000 households would receive subsidy from the DSWD.

Richard Gappi, Arts and Culture Officer of the municipality of Angono and editor of Angono Rizal News Online said, “May allotted na dami/bilang po per bayan, like sa Rizal. Tapos sabi nyo po dagdagan ang forms. Magpapaxerox? E coded ang forms at may serial number,” Gappi said in a Facebook post addressed to Cayetano. (There is an allotted number per municipality like Rizal. Then you said, increase the number of forms. To have it photocopied? But the forms are coded and have serial numbers.

He added that Cayetano’s declaration has only caused chaos, confusion and quarrel among the residents.

Conn Reazo, a barangay worker in Muntinlupa, described their distribution of forms as chaotic. Many are furious or frustrated upon learning they would not get SAP. Some are contractual workers hired by the agencies or BPO employees. Many are also asking why they are not being included when Cayetano said that everyone will receive the cash aid.

In one area, the distribution of forms was put on hold thrice because of chaos.

“As much as we want to give them forms so they can receive cash aids we cannot do that. We know how difficult their situation is but the forms are limited that is why we need to prioritize,” she told Bulatlat in an online interview. 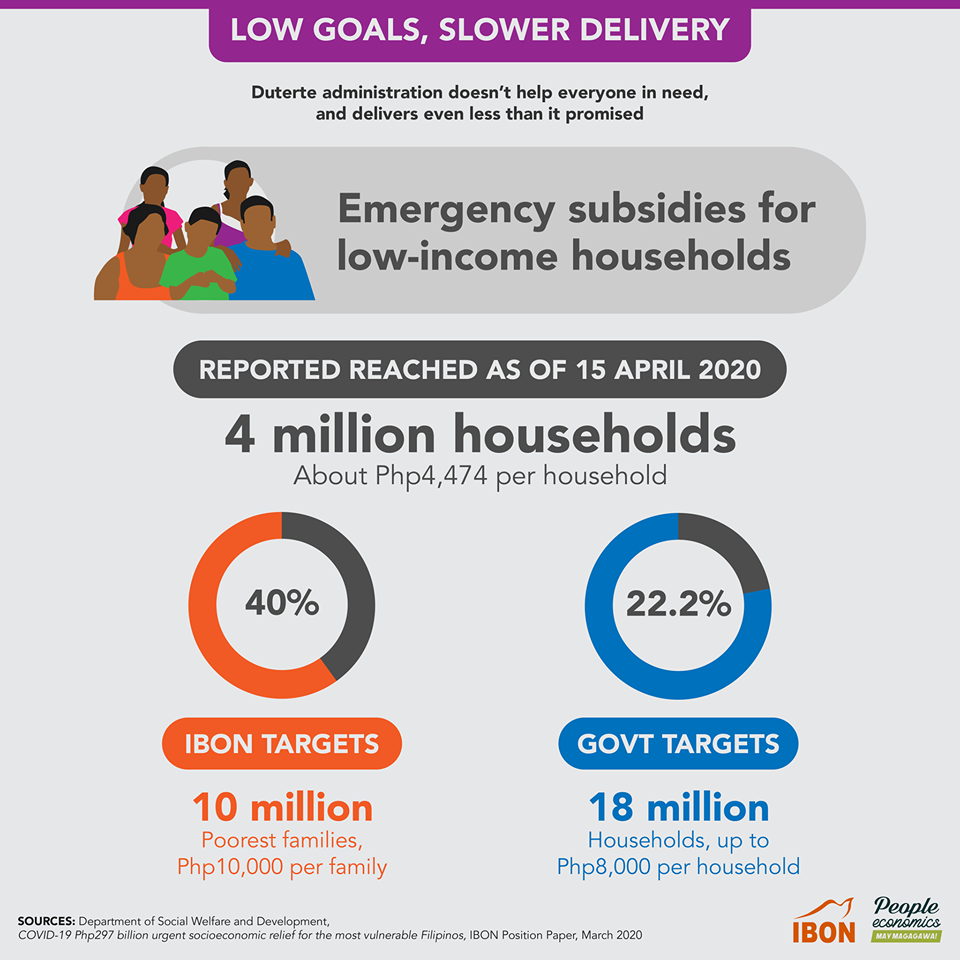 Now into the fifth week of ECQ, many are still waiting for the cash aid.

Based on the President Duterte’s recent report to the Joint Oversight Committee on the Bayanihan to Heal as One Act, only 4,.37 million beneficiaries out of the 18 million targeted beneficiaries have received the cash aid.

“This means that, after nearly one month under lockdown, only around one-fourth of the target has been reached, and that the latest figure only slightly increased from last week’s total number of beneficiaries despite the clamor to expedite government efforts,” said Kabataan Rep. Sarah Elago.

Independent think tank Ibon Foundation also noted that these number is way below the number of targeted beneficiaries.

Ibon noted that no additional beneficiaries were given emergency subsidies since the 3.7 million reported by the Duterte administration last week.

The number of workers assisted by the DOLE is just 1.7 percent of 10.7 million workers.

The number of informal workers assisted, meanwhile, is only 2.3 percent of 5.2 million non-agricultural informal earners.

The number of assisted drivers is just nine percent of the targeted 435,000 drivers. The farmers who have received cash assistance is only 3.3 percent of the Ibon-estimated 9.7 million farmers, farm workers and fisherfolk needing assistance.

“The ambitious targets as well as snail-paced and measly socioeconomic response into the fifth week of lockdown only affirms government’s continued indifference and negligence, especially towards the poorest and most vulnerable,” Ibon said.

They added that “more and more Filipino families will be pushed into deeper poverty under the COVID-19 lockdown if government does not speed up and significantly expand socioeconomic relief and response to reach all those needing assistance.”