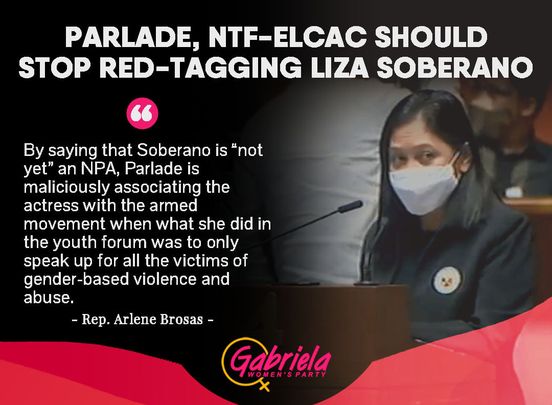 Netizens were up in arms after Lieutenant General Antonio Parlade Jr warned Liza Soberano she would end up getting killed if she continued supporting women’s group Gabriela.

In a statement posted on the National Task Force to End Local Communist Armed Conflict (NTF-ELCAC) Facebook page, Parlade said Soberano “has to be protected in the exercise of her rights,” and hit Gabriela and Representative Arlene Brosas for their “hidden violent agenda.”

“Is [Soberano] an NPA? No, of course not. Not yet. So let’s help educate her and the other celebrity targets of Malayang Kilusan ng Bagong Kababaihan (MAKIBAKA), the Underground Mass Organization hiding under Gabriela Women’s Party,” the statement read.

Parlade also said, if Soberano does not withdraw her support from Gabriela, she would “suffer the same fate” as activist Josephine “Jo” Lapira. Lapira was a UP Manila student who was killed in a clash between government troops and suspected New People’s Army members in November 2017.

Brosas has since responded to Parlade’s remarks, and said he should stop red-tagging and mansplaining when it comes to Soberano and other women defenders. In a statement on Gabriela’s Facebook page, Brosas said it was “starkly ironic” that Parlade appealed to stop red-tagging the actress only for him to follow suit in the same statement.

“How come these macho-fascists have the audacity to mansplain strong women and lecture them on what to do? And why do they seem so afraid of women using their platform to defend other women?” the statement read.

Soberano only recently spoke at a Gabriela Youth webinar on Tuesday, October 13, where she called on influencers to speak up on issues involving women and children. Shortly after the webinar, internet trolls worked hard to make the hashtag #BoycottLizaSoberano trend on social media.

Many Filipinos slammed Parlade for his remarks against Soberano, which they said were tantamount to a death threat – from no less than a uniformed official tasked to protect his countrymen.

Several netizens also said Soberano had the right to express her support for women’s groups and women’s issues without being threatened by military officials. (READ: On social media, PH military declares war vs rights defenders)

Filipinos were also quick to support Soberano and to condemn the military for threatening women and for resorting to red-tagging anyone critical of the government.