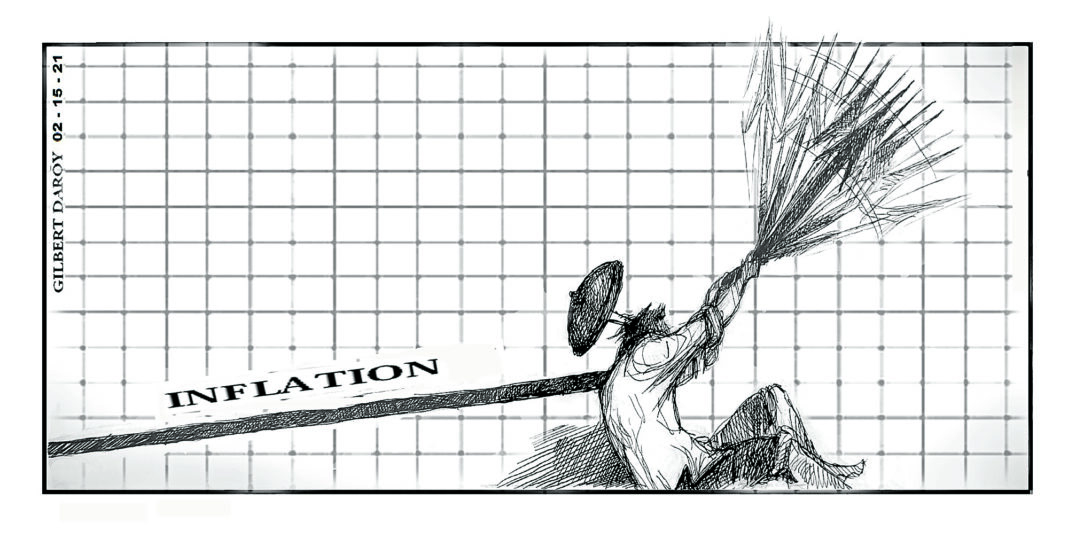 Inflation spiked last January to its highest in two years, catching government and private sector economists by surprise. Not only was the rate of increase in prices of basic commodities the highest since January 2019’s 4.4 percent, it also breached the government’s target range of 2-4 percent for 2021. The sad part is that the impact of high prices is terrible on poor households, as inflation for the bottom 30-percent income households climbed to 4.9 percent, also the highest in two years.

The culprit has been the rising price of pork, which was made expensive by the shortage in supply caused by the spread of the African swine fever (ASF) in hog farms across the country. The Philippine Statistics Authority (PSA) reported that the inflation for meat jumped to 17 percent in January from an already high 10 percent in December last year due to ASF-induced supply shortages. Compounding this was the seasonal tight supply for vegetables, with inflation for this commodity group jumping to 21.2 percent last month. Food accounts for about three-fifths of the inflation rate.

Economic officials said that upward price pressures started in October 2020 when pork supply tightened due to ASF, agricultural output was damaged by a string of typhoons in the last quarter, and mass transportation was still scant to ferry goods to areas that needed them, such as Metro Manila, because of the prolonged COVID-19 quarantine.

What is worrisome is the PSA’s projection that based on its survey trends, the high inflation environment could spill over to the coming months as price conditions — tight supply and logistical difficulties — remain in place. The danger with an extended period of high inflation is that it will prolong the country’s recovery from the recession caused by the pandemic as consumer spending, which fuels the economy, will be discouraged by expensive prices.

Since the problem is a shortage in supply, the solution should be to increase supply. The magnitude of this problem is evident in the 24-percent decline in the country’s hog inventory last January, which the PSA observed was the lowest annual starting stock in 25 years. Official figures also showed that the number of grower pigs (those used for breeding) was down by 29 percent. Eleven of the country’s 17 regions recorded lower outputs, while both commercial and backyard farms saw a sharp drop in their inventories, the PSA reported.

As the ASF pushed pork prices higher by as much as 44 percent, the government imposed 60-day price ceilings on pork sold in Metro Manila’s public markets and supermarkets. This, however, was met with protests from hog raisers and traders; they have refused to supply pork to market vendors since last week to allegedly cut further losses, further worsening the supply situation.

The country is estimated to now have a shortfall of 400,000 metric tons of pork. Industry experts say importing such volume will cost P60 billion at current prices. Stakeholders have yet to agree on how to approach the problem. While meat producers want the government to extend financial aid to the local industry to encourage hog raisers to reinvest, economists suggest reduced tariffs on pork imports to immediately quash the spiking retail prices.

While the government wants to do both, the short-term action needed is to decisively act on lowering tariff on meat imports and issuing in the shortest possible time the import permits to meet the huge supply shortfall. Only then can pork prices stabilize and go down. Given that the problem is a shortage in local supply, importation presents itself as the quickest solution to address the shortage. But this is, of course, merely a stop-gap recourse; more comprehensive structural retooling is needed to shore up and sustain local agriculture and prevent food insecurities from metastasizing, the way it has now.

Malacañang last week announced that it would convene a food security summit to tackle the spike in pork prices due to the ASF, along with other agriculture issues. It shouldn’t limit itself to those issues, but should also acknowledge and get to grips with the larger, more consequential picture long unaddressed but once again highlighted by the latest round of painful inflation: How to make the country self-sufficient enough in food that it wouldn’t have to scramble for imports and be at the mercy of foreign suppliers whenever emergencies and adverse conditions at home threaten the nation’s food supply.