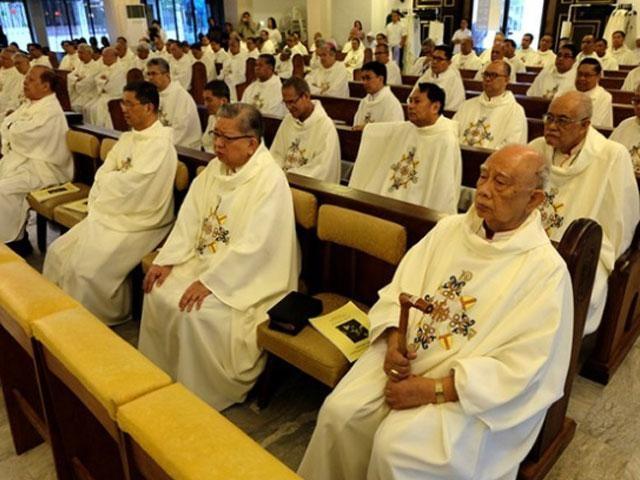 MANILA, Philippines — A Catholic bishop on Monday challenged Chief Presidential Legal Counsel Salvador Panelo to file a case over the Catholic Bishops Conference of the Philippines’ (CBCP) pastoral letter raising concerns over the Anti-Terrorism Act of 2020.

Panelo earlier claimed the CBCP’s pastoral letter “appears to have violated” the constitutional provision on the separation of the Church and the State. He further accused the CBCP of pressuring the Supreme Court in calling for prayers amid the recent signing of the highly controversial measure.

But at a press conference, Manila Auxiliary Bishop Broderick Pabillo said that if government thought that the Church had committed a violation on that account, then he would challenged it to file a case.

(If it really is violative, they should file a case against us. We are challenging them if our letter really violates that.)

(Don’t we have the right to speak about the government’s shortcomings because we are the church we cannot speak out?)

According to Pabillo, the CBCP does not intend to influence the decision of the SC on petitions filed before the high court questioning the constitutionality of the anti-terror law.

(We are doing that in order to raise awareness among Filipinos. Instead of saying things like that, file a case.)

(Our call, it’s clear from the text, that we are calling to prayer. They are the ones who are saying that our intention is to influence the decision of others.)

CBCP: A Pastoral Letter and a Call to Prayer

Sow for yourselves justice, reap in mercy. Break up for yourselves a new field, for it is time to seek the Lord, till he comes and rains justice upon you. – Hosea 10:12

A few days ago, we received a letter from His Eminence, Charles Cardinal Maung Bo, Archbishop of Yangon, Myanmar, and President of the Federation of Asian Bishops’ Conferences. It was an ardent request for prayers for Hong Kong, on account of the signing into law of a new National Security Act. He explained in his letter how this new law poses a threat to the basic freedoms and human rights of the people of Hong Kong, and how it potentially undermines especially their freedom of expression.

Apparently, the Chinese government assures the people of Hong Kong that they have nothing to be afraid of, as long as “they don’t get involved in any activity that threatens national security.” Why does this sound eerily familiar to us Filipinos? Because we are in a similar situation. And so, while we responded with an assurance to His Eminence, Cardinal Bo, that we would join him in praying for the people of Hong Kong, we also asked him to pray for the Philippines and explained why we are as seriously in need of prayers as the people of Hong Kong. Like them, we are also alarmed about the recent signing into law of the Anti-Terror Act of 2020.

We are still in disbelief about the manner in which the contentious Anti-Terror Bill was fast-tracked and approved in both Houses of Congress while the whole country’s attention was focused on the Covid-19 pandemic. They did not even seem to care that many of the people they represent were against it—lawyers’ associations, the academe, the business sector, labor groups, youth organizations, NGO’s, political movements, faith-based communities, and even the Bangsamoro government.

The dissenting voices were strong but they remained unheeded. None of the serious concerns that they expressed about this legislative measure seemed to be of any consequence to them. Alas, the political pressure from above seemed to weigh more heavily on our legislators than the voices from below. It only made more evident the blurring of lines between legislative and the executive branches of our government.

In particular, the legal experts and constitutionalists in our country are seriously concerned that this newly signed law has many elements that are “oppressive and inconsistent with our Constitution.” They have pointed out convincingly how this new law poses a “serious threat to the fundamental freedoms of all peaceful Filipinos.”

And yet, the people in government and their allies have dismissed these fears as unfounded. The assurance that they give sounds strangely parallel to that which the Chinese government gave to the people of Hong Kong: “Activism is not terrorism. You have no reason to be afraid if you are not terrorists.” We know full well that it is one thing to be actually involved in a crime and another thing to be merely suspected or accused of committing a crime.

Have we not heard of people active in social advocacies who are accused of being communists? Have we forgotten the bishops, priests and religious who were included among those falsely charged by the Philippine National Police with crimes of sedition and inciting to sedition? Are we not aware of the thousands of people who have been killed in police operations on the basis of mere suspicion of involvement in criminality and illegal drugs? Have we not followed the news about Senator Leila de Lima who continues to languish in jail, also on the basis of mere allegations? Have we not heard of media personalities being harassed by a multitude of criminal charges? Have we not felt the chilling effect of the closure of the country’s biggest broadcast network, the ABS-CBN, after being denied renewal of its franchise? Is it not evident to us how this pattern of intimidation creates an atmosphere detrimental to the freedom of expression in our country?

In the midst of this bleak political landscape, we draw consolation from the groups of lawyers and ordinary citizens that have filed petitions before the Supreme Court, questioning the constitutionality of the newly signed law. Will the highest level of our Judiciary assert its independence, or will they, too, succumb to political pressure?

The return of “warrantless detentions” through this new law cannot but remind us of the initial moves in 1972 that eventually led to the fall of democracy and the rise of a dictatorial regime that terrorized the country for fourteen years. It all began when an elected president also legalized the “ASSOs” (arrest, search and seizure orders). It was from there that we gradually sank into the mire of authoritarian rule. Knowing how, in just the recent past, the law has been used too many times as a weapon to suppress legitimate dissent and opposition, we cannot but share in the apprehensions expressed by the lawyers and ordinary citizens that filed the petition against the said infamous law before the Supreme Court.

While a semblance of democracy is still in place and our democratic institutions somehow continue to function, we are already like the proverbial frog swimming in a pot of slowly boiling water. We draw encouragement from the belief that in various government agencies we still have many people of good will whose hearts are in the right places, and who remain objective and independent minded. We have nothing but admiration for these public servants in all branches of government who do only as conscience dictates and do not allow themselves to be intimidated or prevented by political pressure from performing their constitutionally mandated duties. We can only wish that there would be more of them. They are an important element to the strengthening of our government institutions, and are an essential key to a stable and functional democratic system.

Allow us then to end this letter by inviting you to pray with us,

“Be with us O Lord our God, as we continue to face the ravages of the Covid-19
pandemic, as well as the recent political developments that have deeply divided
our country. You know how desperately we need to be united in order to fight a
common unseen enemy that has caused a lot of sufferings and uncertainties,
widespread infections, an overwhelmed health care system, loss of jobs, hunger,
immense losses in business, and loss of lives.

We pray for our public servants, our people in government, especially those
among them who remain upright and continue to be motivated by a genuine
sense of duty and love for country. Protect them, Lord, and give them the
courage to stand their ground on the side of truth and justice.

May the crisis brought about by the pandemic bring about conversion and a
change of heart in all of us. May it teach us to rise above personal and political
loyalties and make us redirect all our efforts towards the common good. May we
be guided by your Spirit to respond with mercy and compassion for the poor, the
disadvantaged and the most vulnerable sectors of our society. For we know that
what we do for the least of our brothers and sisters we do for you. AMEN.”