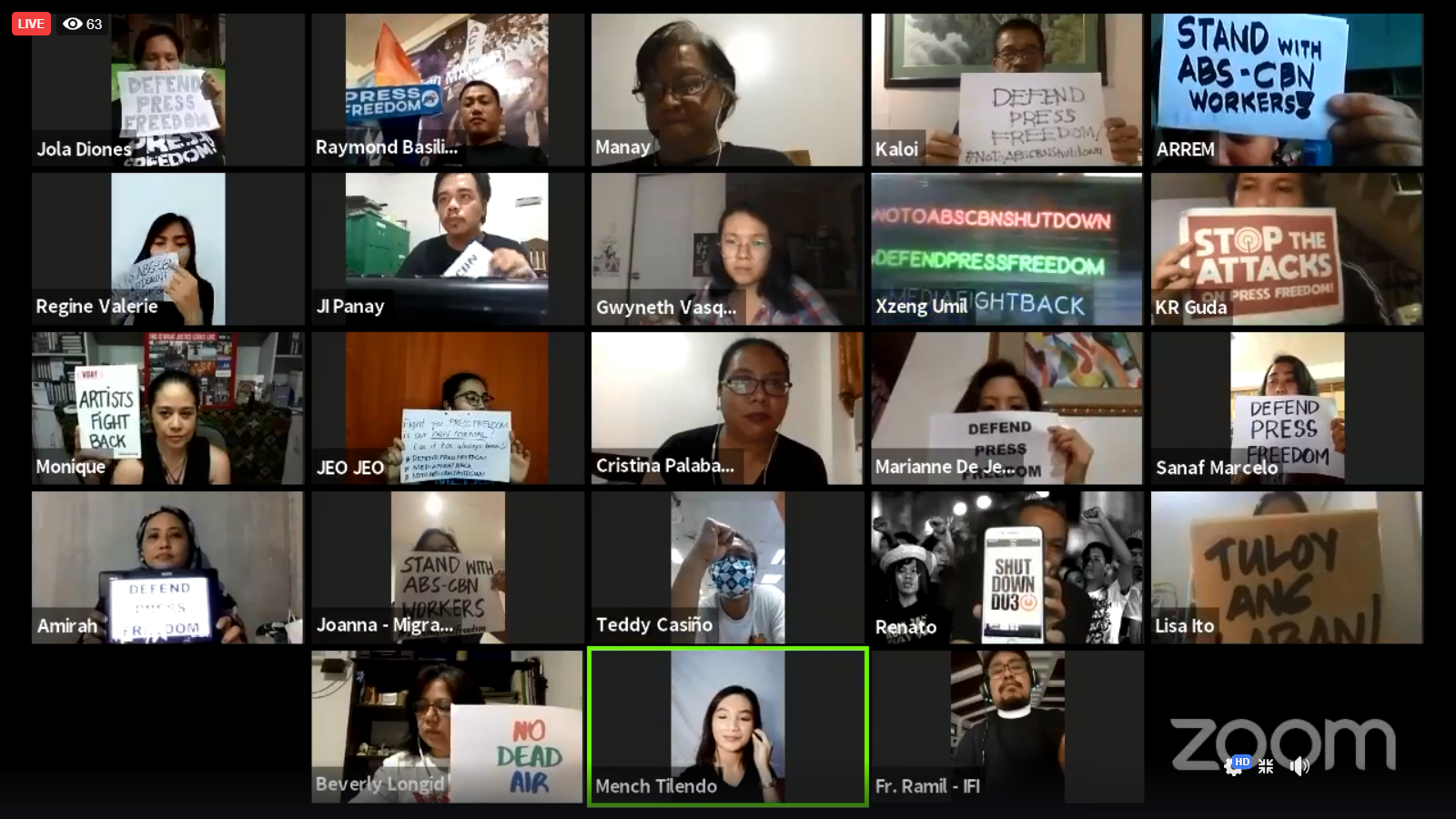 One was led by the National Union of Journalists of the Philippines (NUJP), which is a continuation of the series of “Black Friday” protests held in front of ABS-CBN’s Esguerra gate prior the lockdown order due to the COVID-19 pandemic.

Meanwhile, fellow media and cultural workers, along with human rights activists and press freedom advocates, also held a separate online protest, which they streamed in their respective social media platforms.

On Tuesday evening, ABS-CBN signed off after their primetime newscast, following the shutdown order of the National Telecommunications Commission (NTC). This has been described as a sad day in the country’s history.

ABS-CBN then filed a petition on Thursday as they asked the Supreme Court to “nullify and set aside” the NTC order.

On Thursday evening, the media giant continued its news broadcasts through its digital platforms, with Facebook views garnering more than eight million views as of this writing. This despite their news teams being barred to cover areas under community quarantine in several cities.

“It all boils down to President Duterte’s ire not just against ABS-CBN but to all media that are critical in their reporting,” said NUJP chairperson Nonoy Espina during the online protest action.

Theater actress and women’s rights advocate Monique Wilson assailed how the ABS-CBN was shut down amid a pandemic, when people are in dire need of information that can help them combat the dreaded virus.

This sentiment was earlier shared by urban poor group Kadamay, who said that media is very important in times of a pandemic, “especially with fake and malicious information available that are mostly coming from government mouthpieces.”

Arellano said that at the end of the day, the most affected are thousands who are set to lose their jobs.

Human rights group SELDA earlier said that the ABS-CBN shutdown is “eerily reminiscent,” if not “a déjà vu ” for those who have gone through the conjugal Marcos dictatorship.

In her message, actress Agot Isidro said that if the Duterte government can muzzle the biggest media in the country, it can easily do so for ordinary citizens.

Former Anakpawis Rep. Ariel Casilao said the shutting down of the ABS-CBN is a legitimate concern of all freedom-loving Filipinos, as the “right to free press is non-negotiable, especially amid the tyrannical measures of the Duterte regime.”

He said, “we urge the people to resist the Duterte regime’s attack on press freedom.”