The state-approved art of desecration 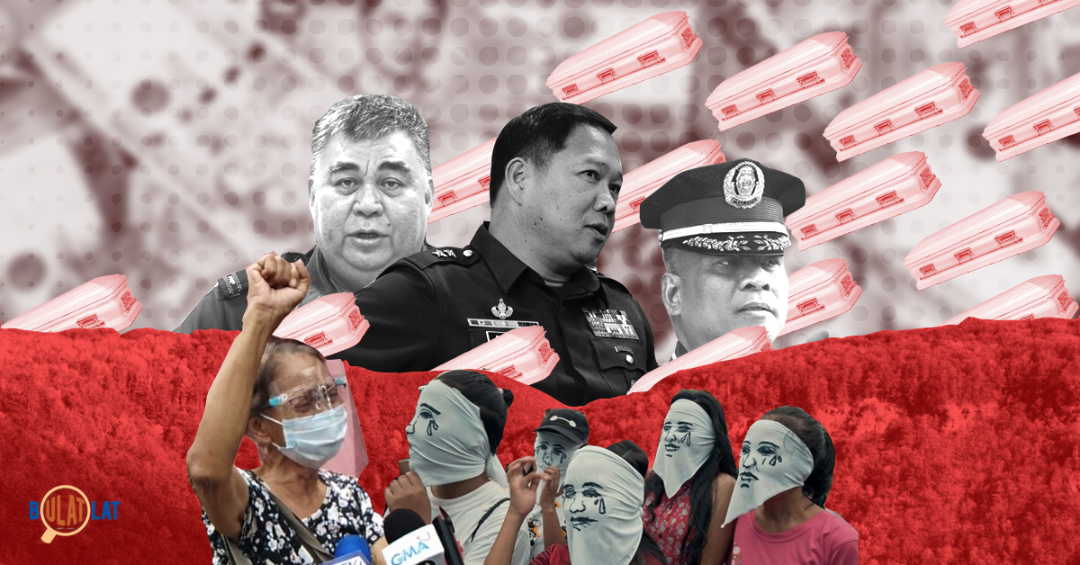 State-approved bloodlust has resulted in grief for families of victims and profit for those who engage in bloody business. Out of all of Duterte’s campaign promises, it seems his challenge to “put up more funeral parlors” was the one that became true.

SANTA ROSA, Laguna — At least six people were killed in a span of one week, from August 3 to 10. The spate of killings also spawned frustration and anger for relatives of the victims. Until now, police still claim custody for three of the six: Dioscoro Cello, Rey Masinas, Alex Perdeguerra. It took two days, meanwhile, before the remains of Randall Echanis were turned over to his family.

Denying families the right to bury their murdered kin is nothing new to state agents. Human rights defenders and relatives of victims have come to expect the harrowing gauntlet of visiting police stations and army camps only to be directed somewhere else, unusual and unnecessary requirements to claim remains, and the tired excuse of “Utos ng nasa taas e,” (The order came from the higher-ups) when reports of extra-judicial killings come about.

“The point of denying families the right to claim remains is to dissuade them and break their spirit in pursuing justice,” said Cristina Palabay, secretary-general of human rights alliance Karapatan. “Not just through bureaucratic means but in how they intimidate families too.”

The recent events surrounding Randall Echanis write itself like a textbook case in human rights violation. The chairperson for Anakpawis Party-list and a peace consultant for the National Democratic Front of the Philippines (NDFP) met his untimely demise inside a rented apartment, murdered and bearing the tell-tale marks of torture.

That morning, his wife Erlinda positively identified the body as that of her husband’s. They claimed the remains later that day.

Things would take an even worse turn when police exerted all effort to snatch Echanis’ remains from the grieving wife, going so far as to claim that the man was actually “Manuel Santiago,” arresting a paralegal for obstruction of justice, and demanding a DNA test to prove identity – something that the police “have no power to demand,” according to Echanis family laywer Jobert Pahilga.

There are also no laws which allow the police to mandate which funeral parlor the remains will be sent to, especially once positive identification has been established. The Echanis family eventually won out and the fallen activist’s remains were turned over for a proper autopsy.

“That has never happened before,” Palabay said, referring to the tug-of-war for Echanis’s remains after it had already been claimed. “Police are usually hands-off once families have managed to claim their relatives.”

Such is the case with the three New People’s Army combatants and one hors de combat killed in back-to-back operations in barangay San Antonio, Kalayaan, Laguna. It took Mario Caraig’s sister Floriza almost five days, passing through one arbitrary requirement after another, to finally claim her brother’s remains.

Caraig was wounded when police raided a house he was staying at and killed him, ignoring his status as hors de combat. The family he was staying in, the Asedillos, were subsequently arrested and have yet to be found.

Dioscorro Cello’s daughter, Reveleen, however, isn’t so lucky. Until now, police are denying all proof that she is indeed who she says – even going so far as to ignore a birth certificate from the the Philippine Statistics Authority by saying that they need an official receipt as well.

“The police are trying to hide evidence of their crimes,” said Kyle Salgado, spokesperson for Karapatan Southern Tagalog. “They’re trying to frustrate all efforts by families to seek justice, while trying to hide their violations of international humanitarian law.”

As NPA combatants, Cello, Masinas, and Perdiguerra are guaranteed rights under the Comprehensive Agreement on Respect for Human Rights and International Humanitarian Law (CARHRIHL), signed by the Government of the Republic of the Philippines and the NDFP.

Part 4, Article 3, Number 4 of the CARHIRHL prohibits the “desecration of the remains of those who have died in the course of the armed conflict or while under detention, and breach of duty to tender immediately such remains to their families or to give them decent burial.”

Hors de combat like Caraig are likewise protected under CARHRIHL, who should have been “collected and cared for by the party to the armed conflict which has them in its custody or responsibility,” instead of treated as a combatant, according to Part 4, Article 4, Number 2 of the said agreement.

The recent spate of human rights violations are hardly the first. Police, military, and state agents have steadily perfected their morbid art of denial of justice since Duterte came to power four years ago. From July 2016 to April 2020, Karapatan logged 308 cases of extra-judicial killing outside of tokhang, or drug-related killings.

But not even tokhang victims get respite. If not hidden by state forces, funeral parlors sometimes charge exorbitant fees to families of victims of senseless killings. Police officers choose these funeral parlors, and reportedly even accompany them to crime scenes to instantly secure remains, collecting their bloody prizes wrapped in tape. It’s an open secret among families of victims that some of the pre-approved parlors chosen by investigators are themselves owned by retired officers.

Llore Benedicto, who lost her two sons Crisanto Antonio and Juan Carlos to Duterte’s war on drugs, said they were shown photos of her sons in Camp Karingal in Quezon City, where she positively identified them. They then had to go to several funeral parlors before they found out that the police had already pre-picked Light Funeral Services for them, and they cannot take the remains to the funeral parlor of their choice.

Light charged P112,000 (US$2,290) for Benedicto’s two sons. Distraught, she sought the help of church-based human rights workers in Rise Up, and lawyer Kathy Panguban, who negotiated a release of P75,000 (US$1,533). It took her and her family a total of eight days since they learned of her sons’ killings before they could hold a decent wake and properly grieve.

State-approved bloodlust has resulted in grief for families of victims and profit for those who engage in bloody business. Out of all of Duterte’s campaign promises, it seems his challenge to “put up more funeral parlors” was the one that became true.

Is there a solution in sight? With the recent imposition of the Anti-Terrorism Law and increasing reliance on police and military action as a cover for “medical” response, it seems like state impunity has reached heights not seen since Martial Law. The old aswangs of Philippine myth have become real: body snatchers in the dead of night, murderers cloaked in shadow.

But if the rise of state terrorism is predicated in history, then it follows that its end must also take cues from historical fact. If there is one lesson we can learn from the Martial Law era, the Filipino people will eventually rise up to end such monstrosities.

The post The state-approved art of desecration appeared first on Bulatlat.