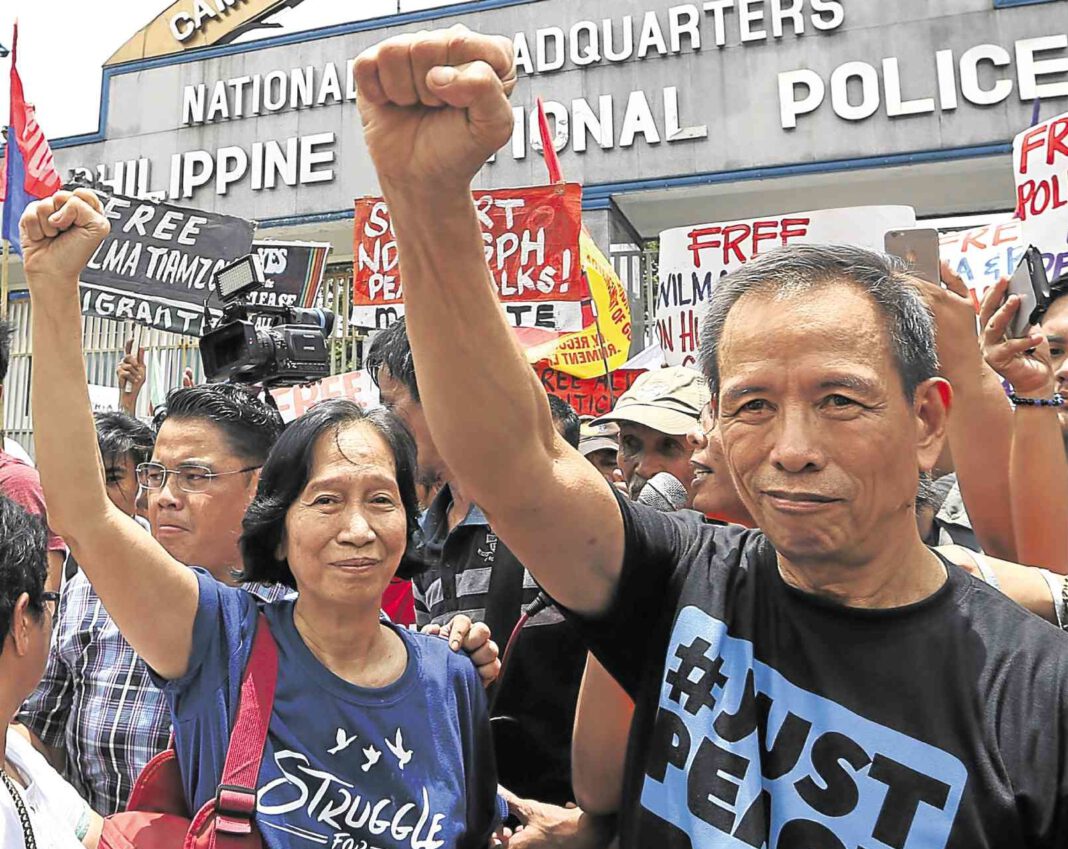 MANILA, Philippines — Spouses Benito and Wilma Tiamzon, who are members of the peace negotiating panel on the communist side, were deprived of a fair trial after witnesses who could have presented evidence in their favor were harassed, according to their lawyers.

In a statement on Friday after the couple was found guilty for kidnapping and placing three military officers and a member of a narcotics command under serious illegal detention, lawyer Rachel Pastores said that circumstances leading up to the promulgation of the case prevented the Tiamzons from defending themselves properly.

Pastores, managing counsel of the Public Interest Law Center (PILC), is the counsel for Benito Tiamzon.

“Benito and Wilma Tiamzon, like other peace consultants, were charged with trumped-up cases but could not effectively defend themselves in court because they and their witnesses are constantly subjected to threats to their lives, harassment, and surveillance,” she said.

“They could have easily presented evidence in their defense and dispute the clear lies of the lone prosecution witness, a high ranking member of the military,” she added.

Pastores and PILC further explained that the Tiamzons filed a manifestation about the dangers that witnesses face — just like what happened to other fellow peace consultants Randall Echanis and Randy Malayao.

Malayao was killed while asleep inside a bus at a pit stop in Aritao, Nueva Vizcaya, last January 2019, while Echanis was found dead with multiple stab wounds in his rented home in Novaliches, Quezon City, just this August 2020.

Atty. Edre Olalia of the National Union of People’s Lawyers (NUPL) meanwhile claimed that the cases were merely resurrected as another form of hardline attack against leftists in the country.

Olalia, whose NUPL represents Wilma Tiamzon, said that the proper charge should have been rebellion and not kidnapping because the communist armed struggle is considered to be waging a civil war against the current government — if they really committed the act.

“Rebellion proper charge dapat instead of kidnapping [be]cause of [the] political offense doctrine of absorption, assuming [the] facts as true but not conceding,” he added.

The NUPL president also stressed that the Tiamzons are still covered by the Joint Agreement on Safety and Immunity Guarantees (Jasig), which provides progressive leaders some legal immunity as the peace process goes on.

However, the past administration maintained that the Jasig does not cover the Tiamzon couple.

On Friday, the Quezon City Regional Trial Court found the couple Benito and Wilma Tiamzon guilty of the cases filed in 2003, for an incident in 1988.

In its 18-page decision, Quezon City RTC Branch 216 Presiding Judge Alfonso C. Ruiz II sentenced the two to a penalty of reclusion perpetua or up to 40 years of imprisonment.