Timeline | Attacks on peace consultants under the Duterte administration 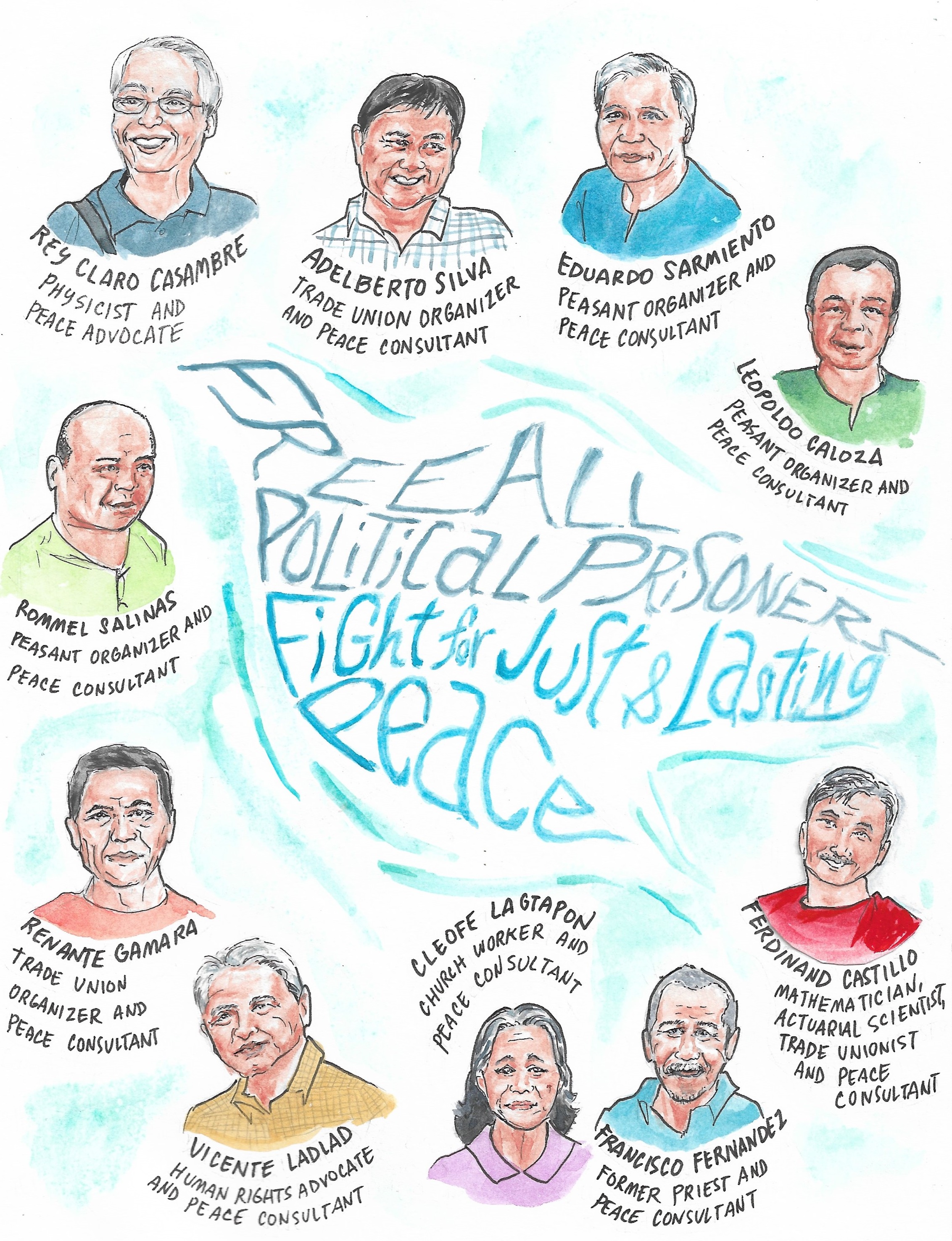 MANILA – Consultants as well as other people involved in the peace negotiations are supposedly protected under the Joint Agreement on Safety and Immunity Guarantees (Jasig) which both the National Democratic Front of the Philippines (NDFP) and the Philippine government approved in 1995. But even then, these consultants are not spared from arrests. There were even cases of them going missing and being killed.

The arrest and detention of peace consultants also violate the Hernandez political doctrine or the Supreme Court ruling which prohibits the criminalization of political offenses.

The NDFP consultants are charged with common crimes to hide the political motive behind their arrest and detention and to portray them as ordinary criminals. Their lawyers have maintained that the evidence against them were planted.

In Rey Casambre’s case, for example, the police claimed to have found inside the couple’s vehicle one colt commander caliber 45 pistol; one magazine for cal. 45; seven live ammunition for cal. 45; one bundle electric detonating cord; one fragmentation grenade, cellphones, a laptop and cash. Four days later, his wife Cora was released pending the conduct of investigation on the said case as the Bacoor City prosecutor found the allegation as “preposterous.”

In this timeline, Bulatlat documents attacks against the peace consultants and Duterte’s statements pertaining to the resumption of the peace talks and issuance of the orders which the NDFP viewed as hindrance to resume the talks in the negotiating table.

Feb. 5, 2017 – President Duterte declares he is calling off the peace talks with the NDFP. He also threatens to arrest NDFP consultants and tags the Communist Party of the Philippines (CPP), New People’s Army (NPA) and NDFP as a “terrorist group.”

Feb. 12, 2017 – NDFP consultant Ferdinand Castillo is arrested by combined forces from the Criminal Investigation and Detection Group (CIDG), Intelligence Services Group-Philippine Army (ISG-PA) and Intelligence Service of the Armed Forces of the Philippines (ISAFP). He is accused of illegal possession of firearms and heinous crimes, such as murder and attempted murder.

May 11, 2017 – Rommel Salinas, NDFP peace consultant and his companions, Bishop Carlo Morales of the Iglesia Filipino Independiente, his wife Ma. Teofilina and driver Isadome Dalid are arrested at a checkpoint in Ozamis City. Salinas is pushing for the continuation of the formal peace talks. He reportedly shows his document of identification as proof that he is protected under Jasig but it was ignored. While his companions are released, Salinas remains in prison.

Jan. 11, 2018 – Manila RTC Branch 32 Judge Thelma Bunyi-Medina orders the re-arrest of Wilma and Benito Tiamzon as well as Adelberto Silva. They are previously granted bail on August 11, 2016 to participate in the peace negotiations. According to the decision, “the court found no reason to further allow their temporary liberty following President Duterte’s Proclamation No. 360, which terminated the peace negotiations between the GRP and the NDFP.”

Jan. 31, 2018 — NDFP consultant Rafael Baylosis, 68, and his companion Roque Guillermo Jr. are arrested along Katipunan Avenue in Quezon City by CIDG-National Capital Region (NCR) elements. The police claim that Baylosis and Guillermo have two caliber .45 pistols and a grenade in an eco-bag with brown rice. They are charged with illegal possession of firearms and explosives. On Jan. 15, 2019, Quezon City court dismisses the charges against Baylosis and Guillermo. The judge finds the police’s claims as “more imagined than real.”

Feb. 24, 2018 — Lora Manipis, NDFP consultant and husband Jeruel Domingo, an NPA commander in Saranggani and South Cotabato go missing. According to a news report, they are last seen in Kidapawan City. The NDFP-Far South Mindanao fears that the couple may have been executed by the military. Prior to their disappearance, the NDFP stresses that the couple are busy conducting dialogues with peasant and indigenous people allegedly affected by the Xstrata Mining operations in Tampakan, South Cotabato.

June 14, 2018 – President Duterte postpones scheduled resumption of peace talks in The Netherlands. He reportedly needs more time to review past agreements between the NDF and the Philippine government.

July 12, 2018 – Former presidential spokesperson Harry Roque says that the government will only resume peace talks through localized peace talks, a policy eventually rejected by the NDFP.

Oct. 16, 2018 – Adelberto Silva, 71, vice chairperson of the NDFP Negotiating Panel’s Reciprocal Working Committee on Social and Economic Reforms, is arrested together with four companions in Sta. Cruz, Laguna. According to news reports, the basis is a ” warrant of arrest related to the 15 counts of murder in the Inopacan, Leyte masscre.” The police claim there are two .45 caliber pistols and explosives found inside the car of Silva et al. They are charged with illegal possession of firearms. Silva is among the 19 consultants released in 2016 to participate in the formal peace negotiations between the NDFP and the GRP. His name is also included in the more than 600 individuals of Department of Justice’s proscription list.

Nov. 7, 2018 – Peace consultant Vicente Ladlad, 68, is arrested together with elderly couple Alberto and Virginia Villamor, in barangay San Bartolome, Novaliches, Quezon City at around midnight. According to news reports, the raid of a house in Novaliches is done by a joint team of the police and military. The latter claim to have recovered various rifles, pistols, ammunition, grenades and subversive documents from Ladlad and the couple. However, Ladlad’s wife, Fides Lim denies all allegations and stresses that the firearms are planted. She says Ladlad is also a chronic asthmatic which has degenerated into emphysema.  Charged with illegal possession of firearms, Ladlad and the Villamor couple are currently detained at Camp Bagong Diwa in Bicutan.

Ladlad is also being implicated in the Hilongos, Leyte case.

Dec. 4, 2018 – President Duterte signs Executive Order No. 70 “institutionalizing the whole-of-nation approach to attain inclusive and sustainable peace.” In this EO, a national task force will be created to end local “communist armed conflict.” NDFP Chief Political Consultant Jose Maria Sison describes this as “presidential issuance to terminate and prevent the resumption of peace talks at the appropriate national level between authorized representatives of the Philippine government and NDFP.”

Dec. 7, 2018 – Peace consultant and Philippine Peace Center executive director Rey Claro Casambre, 67 and his wife Patricia Cora, 72, are arrested while on their way home in Bacoor, Cavite. Casambre is arrested by a virtue of a warrant issued by Davao Oriental Regional Trial Court on Nov. 23, 2018. He, together with six others, are charged with murder and attempted murder in relation to a supposed armed encounter on Sept. 13, 2018 in a remote village in Lupon, Davao Oriental.

The police claim that the NPA is responsible for killing Malayao as the latter allegedly mismanaged funds and ran off with a woman. But the CPP disputes such claims and criticizes the police for spreading intrigues and trying to cover up the murder. Recovered from Malayao is his document of identification proving he was covered by the Jasig. He is the first peace consultant killed under the Duterte administration.

Feb. 19, 2019 – President Duterte once again expresses openness in the resumption of peace talks.

March 25, 2019 – NDFP consultant Frank Fernandez, his wife Cleofe Lagtapon and Ge-ann Perez are arrested in Liliw, Laguna. Military says he had a bounty of P8 million for his capture on charges of rebellion, murder and attempted murder in Guihulngan, Negros Oriental province. His companions, meanwhile, are charged with murder and robbery case in Cadiz City, Negros Occidental province.

Other NDFP consultants Leopoldo Caloza, Emerito Antalan and Eduardo Sarmiento were convicted of trumped-up criminal charges and are serving their sentences at the National Bilibid Prisons in Muntinlupa.

According to Karapatan, there are 532 political prisoners in the country, 209 of whom were arrested under President Duterte’s administration.

Kapatid, families and friends of political prisoners, have been calling for the release of their loved ones.

The post Timeline | Attacks on peace consultants under the Duterte administration appeared first on Bulatlat.