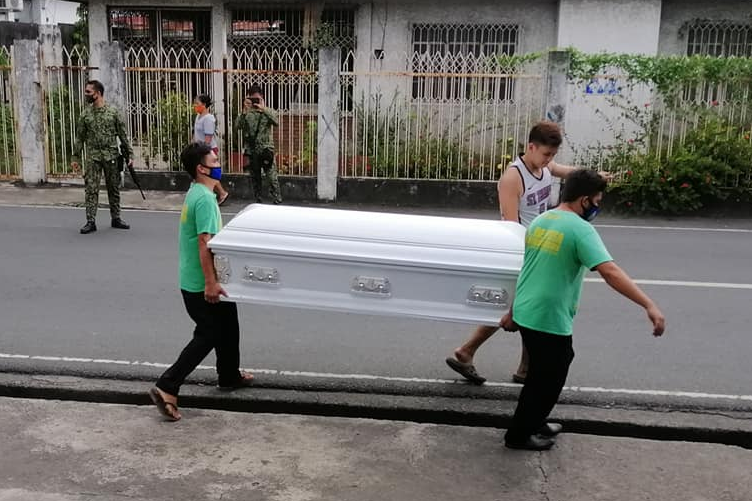 Karapatan ST was approached by relatives of the said guerrillas seeking help in recovering the remains after they were informed that they were in the custody of the police in Camp Vicente Lim, Calamba, Laguna. As of August 16, the team managed to secure the release of Mario Caraig’s remains to his sister, exhume Rey Macinas’ remains, and locate Perdeguera’s, which were both buried in Antipolo, Rizal.

SANTA ROSA, Laguna – Human rights watchdog Karapatan-Timog Katagalugan denounced what they called as ‘inhumane and barbaric way’ treatment of the remains of the four New People’s Army members who were killed in two separate encounters, August 4 and August 8.

A fact-finding mission was launched by the group to investigate the two encounters in barangay San Antonio, Kalayaan, Laguna, which resulted in the deaths of Dioscoro Cello, Rey Macinas, Alex Perdeguera, and Mario Caraig. They are also investigating the disappearance of three civilians, Virgilio Asedillo, his daughter Chloe, and Chloe’s husband Marknel Iwarat.

Karapatan ST was approached by relatives of the said guerrillas seeking help in recovering the remains after they were informed that they were in the custody of the police in Camp Vicente Lim, Calamba, Laguna. As of August 16, the team managed to secure the release of Mario Caraig’s remains to his sister, exhume Rey Macinas’ remains, and locate Perdeguera’s, which were both buried in Antipolo, Rizal.

Kyle Salgado, Karapatan ST spokesperson, said that “these thieving, murderous, and mercenary tactics by the AFP [Armed Forces of the Philippines] and PNP [Philippine National Police] are clear violations of international humanitarian law. They are denying the families the right to a proper and decent burial while disrespecting the dead.”

Remains of three out of four found

Mario Caraig was hors de combat who was wounded after the August 4 encounter which killed Cello, Macinas, and Perdeguera. He was asleep and tending to injuries when elements of the PNP Regional Mobile Battalion 4A arrived and shot him dead, midnight August 12. They also took the Asedillo family, with whom he was staying at, to an undisclosed location.

Caraig’s remains were only returned to his sister Floriza on August 12, with the help of Karapatan ST and the Diocese of San Pablo. Karapatan ST stated that the police were “wildly uncooperative” and repeatedly questioned Floriza’s relationship to Caraig, before acquiescing after Floriza procured a Certificate of No Marriage to certify that Mario Caraig had no other family.

Macinas’ remains were found on August 13 in a cemetery in barangay San Jose, Antipolo, Rizal, over nine days after he was killed. Officers at Camp Vicente Lim informed Macinas’ family that they had already buried the man – over 60 kilometers away from Calamba.

Karapatan ST assisted Macinas’ family in recovering the remains in Antipolo, where it was found that he was buried “without dignity.” His remains were found covered only with “a blanket and some plastic, not embalmed or even clothed,” according to a statement released by the group.

“It’s distressing how Macinas’ remains were only sent to Green Lawn to be autopsied before being stolen again, only to be buried somewhere,” they added.

Perdeguera’s remains were similarly found August 15, eleven days after the initial encounter, buried next to Macinas in the same cemetery in San Jose, Antipolo. The grave was simply labeled “Ka Omar.” Police officers in sitio Cabading, barangay San Jose confirmed it was Perdeguera after Karapatan showed them pictures. The grave has yet to be exhumed as of press time.

The whereabouts of Cello’s remains are still unknown. His daughter Reveleen has been asking the officers in Camp Vicente Lim as early as August 6 for custody of her father’s remains. Police have repeatedly denied requests, going so far as to insist for the official receipt of Reveleen’s PSA birth certificate.

Adding to this, the family that sheltered Caraig while he was recovering has yet to surface. According to eye-witness accounts from neighbors, the three were allegedly brought to the Kalayaan Municipal Police Station, but the group could not locate them there.

On August 12, the AFP’s 202nd Infantry Brigade released a statement stating that the Asedillos were “seeking refuge from potential reprisal by the CPP-NPA,” showing an alleged letter coming from Kalayaan Mayor Sandy Laganapan and an attached sworn statement from the three.

According to BGen. Alex Rillera, commander of the 202IB, the family approached the military to seek protection and were brought to Camp Capinpin in Tanay, Rizal.

Karapatan ST is disputing this, calling it a case of illegal detention. “It’s clear that the AFP and PNP only wish to implicate the family in their disinformation campaign and dark designs,” said Salgado. “The Asedillo family has been in their custody for almost a week with no basis, all while asserting that they were ‘looking for help.’ The military must surface them.” 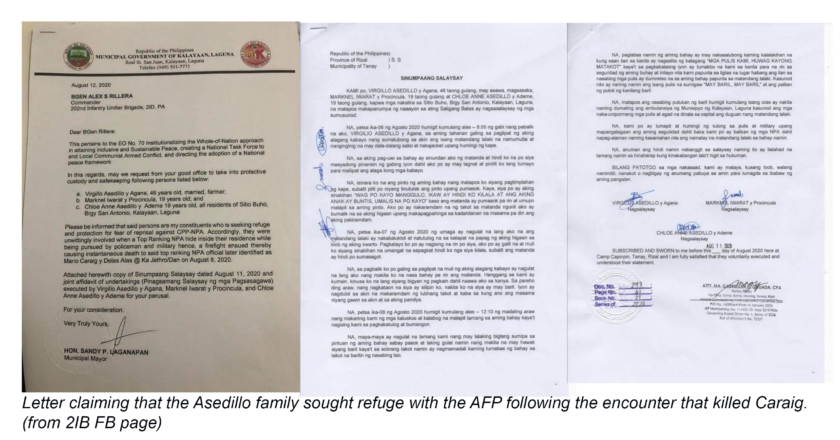 Karapatan ST lambasted the AFP and PNP for their “flagrant violation of human rights and international humanitarian law,” calling their human rights record “insincere and spotty.”

According to the group, the police and military’s actions are in direct violation of the Comprehensive Agreement on the Respect of Human Rights and International Humanitarian Law (CARHRIHL), a joint agreement between the Government of the Republic of the Philippines and the National Democratic Front of the Philippines guaranteeing respect for the basic rights of combatants and non-combatants for both sides.

Part IV, Article 3, Number 4, prohibits the “desecration of the remains of those who have died in the course of the armed conflict or while under detention, and breach of duty to tender immediately such remains to their families or to give them decent burial,” which Karapatan asserts the AFP and PNP violated in the case of Perdeguera and Macinas, and continues to violate in Cello’s case.

They are also citing violations to the 1949 Geneva Conventions, of which the Philippines is signatory to, in the case of Caraig, who was hors de combat when he was killed in a police action.

Barangay San Antonio, Kalayaan has been the site of extra-judicial killings and police operations this year alone. Last January, two peasant activists, Emerito Pinza and Romy Candor, were killed by elements of the PNP RMFB4A and erroneously claimed to be members of the NPA. Last June, barangay captain Froilan Reyes was gunned down on his way to nearby Lumban. 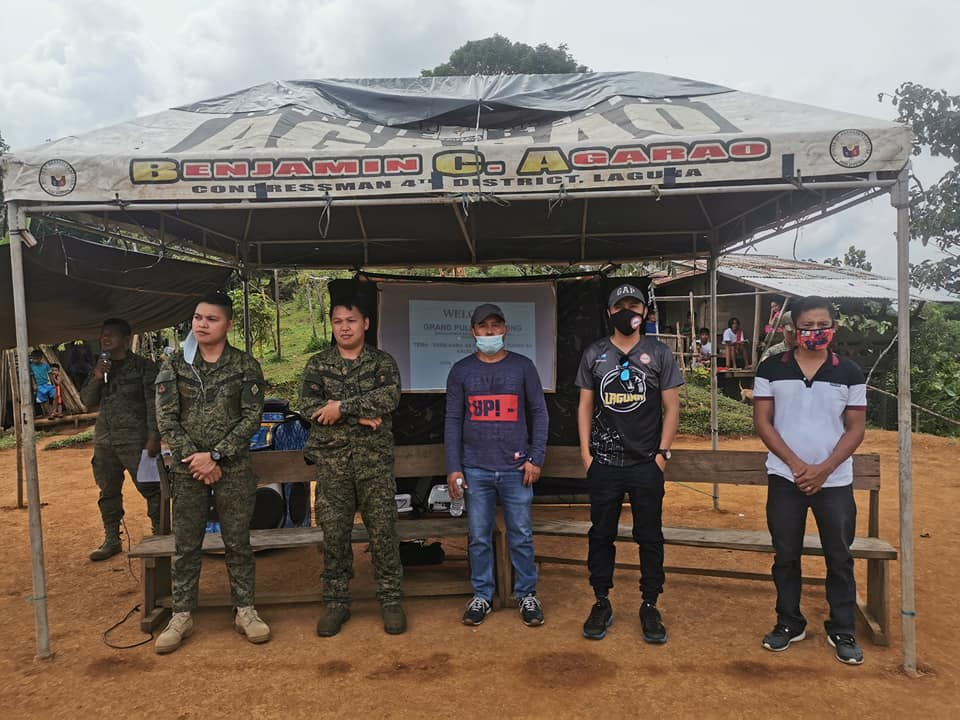 Barangay San Antonio sits near the Sierra Madre mountain range, and borders Mauban, Quezon. It is near the site of the government’s private-public partnership with CBK Power Company Limited (CBK PCL) in building the Caliraya-Botocan-Kalayaan power plant.