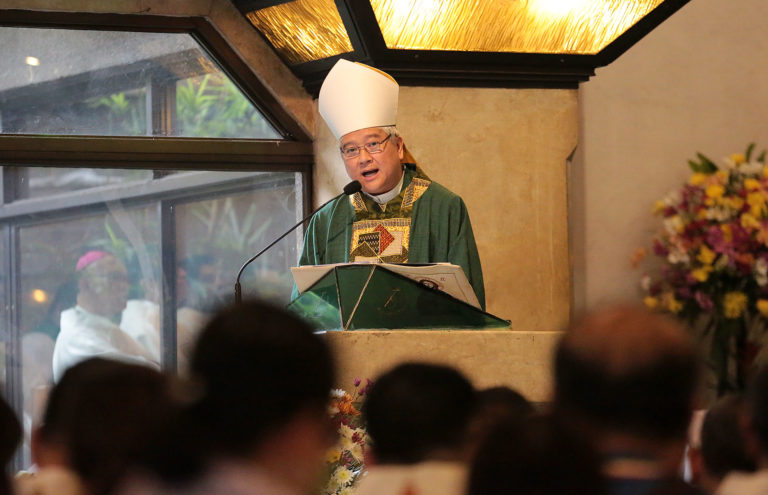 ANGELES CITY—Archbishop Socrates Villegas has called on parents and educators to help the youth develop critical thinking to distinguish the fake news from the legitimate ones on social media.

“You do not just allow others to make a judgment on your behalf because there is no substitute to a conscience that is enlightened and then a conscience that is making its own discernment,” he told a national conference of the Association of Catholic Universities of the Philippines (Acup) at the Holy Angel University here on Wednesday.

Villegas, head of Archdiocese of Lingayen-Dagupan and past president of the Catholic Bishops’ Conference of the Philippines, also said the Christian message is “essentially confrontational” as he encouraged youth leaders and educators to defy evil.

He gave the advice to conference delegates who gathered here to reflect on the “Amoris Laetitia” (The Joy of Life), the apostolic exhortation on the family.

“We are not afraid to shake up principles, beliefs, paradigms and viewpoints that are essentially and evidently contrary to the Gospel values,” Villegas said.

“Cowardly companions are not allowed. We are not war freaks. We are not troublemakers but we should not offer consolation without challenging and confronting evil.”

He reminded Acup members that Christ rebelled against the wrongs committed in his time.

Family life and education, he said, should be both an “encounter” and an “accompaniment” with Christ.

“The accompaniment that the Pope offers in Amoris is [one] that confronts evil, [while] at the same challenges you to be better. Accompaniment is not a see-no-evil, speak-no-evil thing. It is rather confronting evil,” he said.

In an interview, Villegas said young people are immersed in “so many values that are contrary to the Gospel and to authentic values.”

He said: “Amoris Laetitia is not about sex. It has been misunderstood. It has been misinterpreted and this is sad.” Amoris is “not a lighthouse but a torch that walks with the people,” he added. /jpv