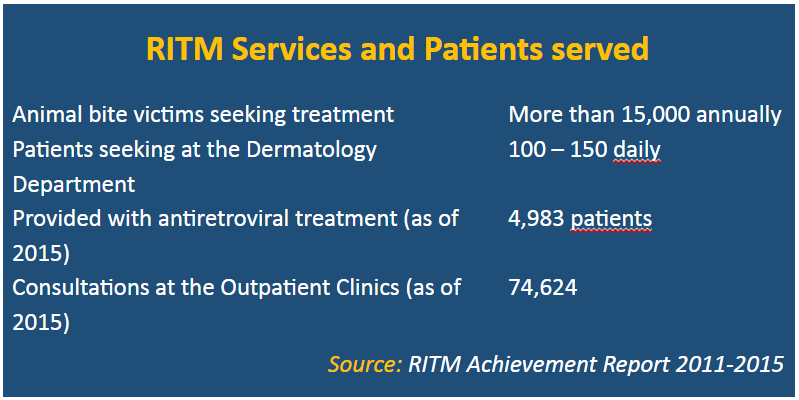 This is a sidebar report to our special report: RITM, the missing piece in the Philippines’ mass testing capacity vs. COVID-19

Established in 1981, RITM was an outcome of a series of negotiations between the Philippine and Japanese governments. The 50-bed capacity hospital was tasked to plan and implement research on programs for infectious and tropical diseases. It has since merged with other government agencies to expand programs and services such as producing vaccines and later serving as the National Reference Laboratory for dengue, influenza, enteroviruses, measles, tuberculosis, to name a few.

It has provided evidence-based clinical management on various health emergencies, including those of international concern such as the SARS-COV in 2003, the pandemic Influenza A in 2009, the Middle East Respiratory coronavirus (MERS-CoV) in 2014, and Zika virus in 2015.

It has also launched various programs in the prevention of spread of HIV in the country, including a national HIV treatment and monitoring program, school-based prevention, and the elimination of stigma associated with HIV through a national testing week.

Most importantly, RITM is known for responding to tuberculosis, malaria and dengue fever cases.

In 1982, just a year after its forming, the RITM began its Acute Respiratory Infection Research Program, which was primarily tasked to look into child pneumonia in the Philippines.

In 2013, the RITM’s Surveillance and Response Unit was formed. Its so-called “baptism of fire” was during the Philippine government’s response to the MERS-CoV, along with the Epidemiology Bureau, as they traced all 414 passengers of an Etihad flight that carried the male Filipino nurse who was afflicted by the virus.

The Surveillance and Response Unit, in the aftermath of the MERS-CoV response, was hailed for its significant role in the surveillance efforts of both emerging and re-emerging diseases of the health department and the WHO.

The post What is RITM? appeared first on Bulatlat.