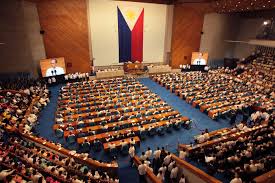 Charter change (Cha-Cha) is once again alive in Congress and lawmakers are pushing for it exactly a year before the campaign period for the 2022 presidential elections officially begins.

Critics are rightly raising red flags over the timing of this fresh bid to amend the 1987 Constitution.

Cha-Cha is a long, arduous process that entails thorough debates and spending money to conduct a plebiscite where Filipinos would vote on the proposed amendments.

Yet loyal allies of President Rodrigo Duterte are renewing their push for Cha-Cha right in the middle of the raging coronavirus pandemic. Never mind that the government is still scrambling to quell the rising number of cases and compete with other countries to buy enough COVID-19 vaccines for all.

Politicians bent on running in 2022 will also be filing their candidacies by October this year, which means they would soon be preoccupied with their campaign strategies.

House Speaker Lord Allan Velasco as well as Senators Ronald “Bato” dela Rosa and Francis Tolentino are justifying their renewed attempt to kick off Cha-Cha by just limiting the amendments to the economic provisions of the Constitution.

They argued that easing constitutional restrictions on foreign ownership supposedly would help off-set the crippling effects of the pandemic on the Philippine economy.

They want these amendments to be done by Congress turning itself into a Constituent Assembly (Con-Ass), one of the 3 ways to amend the charter.

But this is just the latest twist in efforts to change the 34-year-old charter under Duterte, who has long wanted the country to shift to a federal system of government.

This time, the President ordered Congress leaders to revive Cha-Cha – not with COVID-19 in mind – but to intensify his crackdown on leftist party-list groups.

Constitutional law professor Tony La Viña warned lawmakers can easily open the floodgates to tinker with any provision – even the entirety of the Constitution – once the Con-Ass is convened.

“Once you open up a Constituent Assembly, nobody can say that we cannot discuss anything else. So that is for sure. I can guarantee you that there will be political provisions that will be amended, and it will essentially be about the extension of terms,” La Viña told Rappler.

Attempts in the previous 17th and current 18th Congresses have so far failed because senators were strongly opposed to Cha-Cha. Even now, senators questioned the timing and said it could be “one big step into quicksand.”

The closest the House of Representatives has ever been to amending the Constitution under Duterte was in 2018, when former president Gloria Macapagal Arroyo was still speaker. She shepherded the swift approval of a resolution that would have shifted the country to federalism. But it was “dead on arrival” in the Senate.

Duterte and his allies, however, are clearly not giving up. The House committee on constitutional amendments is reopening its hearings on Wednesday, January 13.

Here’s what you need to know about the latest moves to amend the Constitution:

What is charter change?

Cha-Cha is the colloquial term used to refer to proposing amendments or revisions to the Constitution.

Amendments refer to changes that do not affect the overall structure and basic principles of the Constitution. Revisions are changes that involve alterations in the structure.

Duterte-allied lawmakers are proposing amendments to Articles XII, XIV, and XVI of the Constitution. These essentially limit foreign investments in the Philippines to favor Filipinos in terms of ownership and management of natural resources, alienable lands, public utilities, education institutions, mass media companies, and other industries.

What are the 3 modes to change the Constitution?

The charter allows 3 ways to introduce changes. These are via:

What provisions do Duterte allies want to amend now?

The Resolution of Both Houses (RBH) No. 2 penned by Velasco in July 2019 will be treated as the mother measure in the lower chamber. It proposes amendments to the so-called “restrictive” economic provisions in the charter.

Velasco’s RBH 2 is proposing to add the phrase “unless otherwise provided by law” on the constitutional restrictions that limit the participation of foreign investors in the governing body of entities based on their proportionate share in the capital.

The same phrase would be added to provisions saying only Filipino citizens can control, own, and/or lease alienable lands, public utilities, educational institutions, mass media companies, and advertising companies in the Philippines.

The addition of the phrase “unless otherwise provided by law” means Congress would be given the power to pass laws easing foreign investment restrictions in the country.

It also means lawmakers would be able to use legislation to lift the constitutional prohibitions on foreign investors – something Congress is not allowed to do at the moment.

Velasco’s proposed amendments are similar to what Senator Win Gatchalian also wants under his RBH 1 that the latter filed in July 2019.

Senators Dela Rosa and Tolentino are less specific in their own RBH 2 filed only in December 2020. They want to change provisions on “democratic representation and the economic provisions of the Constitution,” but did not provide specifics.

“Democratic representation” may then mean that the two Duterte allies want to introduce changes to the scope of power and even the term limits of elected officials.

What is their defense for Cha-Cha?

For Velasco, Dela Rosa, and Tolentino, allowing more foreigners to own and manage industries in the Philippines would supposedly help the country recover from the COVID-19 pandemic.

“Foreign investment plays a crucial role in the Philippine economy by supporting domestic jobs and the creation of physical and knowledge capital across a range of industries. The need to attract foreign capital is critical to support our economy’s recovery from COVID-19,” Velasco said in a statement on Wednesday, January 10.

But no less than Senate President Vicente Sotto III revealed why Duterte wanted them to revisit Cha-Cha: The President wishes to change the party-list system to boot out progressive lawmakers critical of him.

What’s the problem with the pandemic justification for Cha-Cha?

Professor Herman Kraft, chair of the political science department at the University of the Philippines-Diliman, told Rappler that the problem with using the pandemic to justify Cha-Cha is that “charter change is a political response to what is effectively a technical problem.”

Kraft pointed out that current circumstances outside Congress indicate Cha-Cha will not just be about the economic provisions. There’s the controversy involving the roll-out of COVID-19 vaccines and Duterte himself wanting to change fundamental political issues on the party-list system.

“If they insist on including all these issues and then justify a limited discussion and debate on the basis of the pandemic, then this is little more than a political exercise and not one that is directed at responding to the effects of the pandemic,” Kraft said.

Kraft also argued foreign investments would not immediately pour into the country once the economic provisions are amended.

“The coronavirus is still here and the effect of the vaccine is still months (if not at least a year) into the future. Changing the economic provisions of the Constitution will not immediately lead to investments pouring into the Philippines and pump-priming the country’s economic recovery,” he said.

Professor La Viña also said it’s not logical to open up the economy to foreign investors when global trade is still unstable due to the pandemic.

“It’s actually the worst time to change your economic provisions of your Constitution because things are in flux globally. Capital is not moving globally. Global trade is not at its best because of the pandemic. Countries are closing their borders, are tightening, are supporting their internal, domestic sectors and companies,” La Viña said.

When politicians push for Cha Cha just as their terms are about to end, critics cannot help but be suspicious about the underlying goal of extending and expanding their power.

La Viña agrees, saying the timing of any attempt to change the Constitution is crucial.

“I’ve studied charter change for the last [several years], even the 1935 Constitution, and you can see that the pattern is always clear: The ones that really are economic or fundamental to the country is done in the first year or two. There’s no self-interest there,” La Viña said.

Malacañang already said Duterte is not after extending his term in this latest push for Cha-Cha. Velasco also said he is eyeing the conduct of the plebiscite for the proposed amendments to economic provisions to coincide with – and not cancel – the 2022 elections.

For now, it’s in the best interest of Filipino voters to closely watch the Cha-Cha proceedings in the House and the Senate. Lawmakers’ true intentions, after all, are often revealed not by their media statements, but by their actions within the hallowed halls of Congress. – Rappler.com