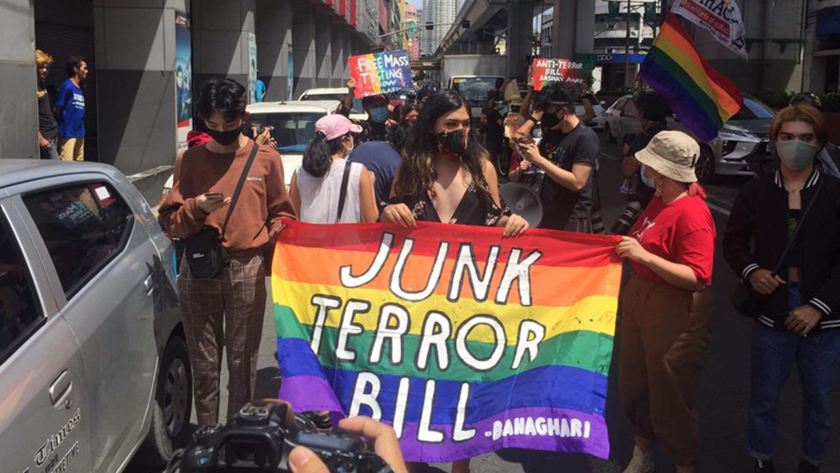 “The arrest of #Pride20 directly goes against the Philippine government’s pledge of commitment to the Convention on the Elimination of All Forms of Discrimination against Women’s (CEDAW).”

MANILA– An international women’s group condemned arrest of 20 members of LGBTQIA+ and their supporters, also known as #Pride20, while holding a protest commemorating the International Pride Month.

In a statement, the Asia Pacific Forum on Women, Law and Development (APWLD) said that the arrest of #Pride20 directly goes against the Philippine government’s pledge of commitment to the Convention on the Elimination of All Forms of Discrimination against Women’s (CEDAW).

APWLD added that the illegal arrest violates the country’s obligation to the United Nations General Assembly Resolution ‘Protection against violence and discrimination based on sexual orientation and gender identity’ “which ‘strongly deplores acts of violence and discrimination, in all regions of the world, committed against individuals because of their sexual orientation or gender identity’.”

APWLD reminded the Philippine government of the General Recommendation No. 28 on the Core Obligations of States Parties under Article 2 of the Convention on the Elimination of All Forms of Discrimination Against Women states in Paragraph 18 which states that ‘Discrimination on the basis of sex or gender may affect women to a different degree or in different ways to men. States parties must legally recognize such intersecting forms of discrimination and their compounded negative impact on the women concerned and prohibit them.”

In a separate statement, International Coalition for Human Rights in the Philippines-New York City also sounded their call to free the Pride20 and said it was act of violence against LGBTQIA+ community “no less during Pride Month, which commemorates the spirit of strength, resistance, and basic human rights and dignity of LGBTQIA+ people…”

ICHRP-New York City said the trampling of basic right of the Filipino people to organize and their freedom of expression is becoming evident even if the Anti-Terror bill still has not been signed into law.

The 20 were arrested on June 26 as they joined LGBTQIA+ organization Bahaghari-led protest to celebrate the 51st anniversary of landmark Stonewall Riot which led to the series of protests in America fighting for equal rights of queers.

Protesters were then violently dispersed by officers from Manila Police District (MPD).

Contrary to the MPD’s initial take on the arrest, the activists practiced social distancing, and wore masks as the minimum health protocol for the COVID-19 pandemic requires.

Among the issues echoed by the LGBTQIA+ activists and allies during the protest were the militarized response of the national government as part of COVID-19 response and the looming passage of Anti-Terrorism Bill which is seen as a weapon against administration’s critics.